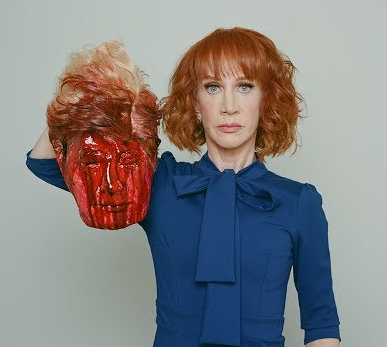 The GOP might think they are being tolerant or taking the high ground by letting Kathy Gifford get away with her disgusting prank, but they are being foolish and pusillanimous are putting our President and his family in grave danger.   Even were her apologies sincere (they are not), poppycock!  Threatening to kill the President is a felony. She must be prosecuted.

Evil must be faced and terminated; otherwise it grows exponentially because that is the nature of evil.  That is already happening as she accuses the Trump family of persecuting her!  Outrageous and totally base. She must be stopped now.

The Left calls this “art” or Freedom of Speech.  Arts are our means of communicating and expressing our thoughts and feelings.  For example there are musical arts, fine arts, visual arts, language arts,  and dramatic and performing arts, to name just a few of the many.

Through her art, Kathy Griffin expressed to the world what her wishes are.  It was her one-woman dramatic production.  No matter anyone’s political leanings, Kathy Griffin’s deplorable demonstration should be shunned by every human being because is beneath our dignity.

She used her art to display and to tell everybody that she wishes President Trump to be decapitated.  The Secret Service must and should have already apprehended, interrogated and began prosecution of Kathy Griffin.  Force is only stopped by greater force, in this case by federal prosecution.  To permit Kathy Griffin another day of freedom is foolhardy and dangerous not only to the Trump family but to all of America.

Before you disagree with me, remember that Charles Manson is serving life in prison right now, yet he was not present nor did he commit any of the murders during that fateful summer of 1969.  As was the ring leader of the group known as the Manson Family, his followers slaughtered Sharon Tate and four other people; obviously actions speak volumes and can evoke action from others.

Chris Gaubatz: The Threat of CAIR and the Muslim Brotherhood