Aristotle once postulated, “Nature abhors a vacuum”, suggesting that any hollow, futile space must be filled with something meaningful and it’s as true in politics.  President Donald Trump is filling the vacuum created by the 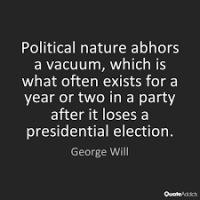 Republican Party and Barack Obama. Obama created the vacuum as his left wing zealots drained our country of treasured American values and optimism, leaving a vacuum of angst, despair and fear.

Just like an airplane cabin whose door is (very foolishly) thrown open at 30,000 feet. Something is going to rush in or out very fast – be it air out of a plane, or new rulers into a nation experiencing a power vacuum.

We saw this principle play out in Iraq. When Saddam Hussein was deposed at that country’s dictator, the occupying American forces became the only force capable of filling that sudden vacuum – of maintaining order against the radical Jihadist elements in Iraq. Following Barack Obama’s precipitous withdrawal, we saw the rise and spread of ISIS, the Islamic State, and a terrorist cancer that quickly crossed borders and established itself in Syria as well. And now, after years of relentless bludgeoning from Iraqi forces in their home nation, along with Syrian, American, and Russian forces next door, the Islamic State is on the ropes. They’ve lost control of the crucial city of Mosul, and the fall of their de factor capital, Raqqa, seems a foregone conclusion. Is it time to celebrate?

Without a doubt, the destruction of the ISIS is a wonderful thing. They had established a brutal caliphate, one that terrorized both the people unfortunate enough to live under their dominion, and Westerners who suffered at the hands of suicide bombers and other attackers. But we would do well to remember the lessons we’ve learned leading up to the Islamic State; when they fall, who (or what) will replace them?

The question is especially important, because numerous competing interests are already vying to fill the coming power vacuum – in Syria most particularly, which is highly unstable and looks warily toward an uncertain future. As the dictator of that nation, Bashar al-Assad, fights to put down a persistent rebellion (which operates at the same time, though by no means on the same side, as the remnants of ISIS), he enjoys military and financial support from Russia and Iran. And those two nations, one of which is openly hostile to the United States while the other is a major political rival, can hardly be trusted to seek a new equilibrium beneficial to American interests.

But then, it’s hard to know what “American interests” even are when it comes to the Middle East. Is it the imposition of democracy, by any means necessary? Perhaps – but perhaps not. After all, we tried that in Iraq, and it’s led us here. Overthrowing al-Assad – a brutal dictator, by any measure – isn’t necessarily to be desired if it creates an opportunity for the successor to ISIS to take root. Then there is the question of whether the people being “freed” even want to be free. Given the chance to participate in fair elections, many fundamentalist Muslims in the Middle East would happily vote for Islamic theocrats that ran on platforms of enforcing Sharia law. It’s hard to argue that this would be a happy outcome for the United States.

Neither, of course, do we want in power an al-Assad who has total control once more of a powerful Syrian nation, while now owing his station to the help of anti-American geopolitical adversaries of our country. On the balance, in fact, this is hardly any better than an openly radical Syria at all.

It could be that what is really needed is keep Assad around in a position of limited power, potent enough to hold down the Islamists in his country but not enough of a threat to meaningfully serve Russian and Iranian interests.  There needs to be a discussion in the US on how best to achieve this, because the vacuum is going to be filled – it’s merely a question of how.