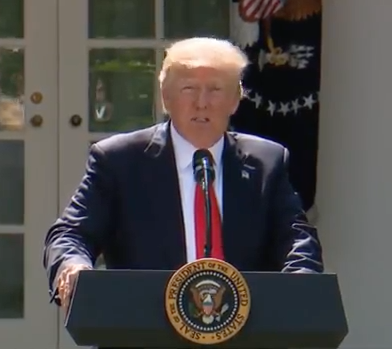 Though he will undoubtedly be derided and unmercifully criticized, President Trump put America first by withdrawing from the Paris Climate Accord. In so doing, he is keeping a campaign pledge he made and more importantly…he is acting in America’s best interests.

Trump is a pragmatist not an idealist. Why should we voluntarily forego utilizing our full manufacturing potential? Who benefits most? Trump is a businessman first and foremost. To him, you put your own interests ahead of the interests of the other guys. Though he will undoubtedly be called an idiot, he is anything but a fool.

Though millennials will have a hard time understanding this, the world is not a nice place where everyone always plays nice. If you don’t look out for yourself, no one else will. The United States is the most powerful country on Earth. Why should we ever negotiate from a standpoint of weakness? There is a difference between doing the right thing and letting people take advantage of you. Trump realizes this. As he announced our withdrawal from the Accord he asked: “At what point do they start laughing at us as a country?” Under Obama we undoubtedly looked weak. It’s all well and good if we do things that makes us look good in the eyes of the rest of the world, but at what cost? There is a large group of Americans, including politicians, scientists, and major corporations that agree with U.S. participation in such agreements, but it’s the coal miners and others who have to pay for it as jobs disappear. Who has been listening to them?

I’m sure Trump, the master businessman, sees things as a corporate CEO. For-profit corporations have only one purpose: Maximize profits for their shareholders (i.e. Owners). No CEO, or at least no sensible, competent, or ethical CEO would ever say: “I think we need to close down some of our profitable operations. Sure we have tons of resources, but if we keep it up, we will destroy the world. It’s better that we don’t do that. It doesn’t mean that a hundred other corporations are going to maintain their harmful operations, we are the only ones that have to worry about the responsibility of saving the planet. We may make a lot less money and have to cut a lot of jobs, while our competitors expand operations and enjoy greater profits, but at least we can smile about our good intentions.”

Any CEO who rationalized things in such a manner would almost certainly be fired, if not sued. They have to answer to shareholders and while millennials would like to think the world operates differently, the only thing that matters to investors is profits. Period. That’s how the real world works. If a company owns a ton of forest land and can make more profit by developing that land instead of leaving it as is, the CEO and Board of Directors of that company have a duty to develop the land. I don’t like seeing forests destroyed. I would rather see trees than a concrete parking lot. However, I’m also a realist.

Trump is a realist and he looks at everything from a skeptical point of view. He sees things on complex terms, not simple terms, and he has combined his business acumen with service to his country. If one were to think of the United States as a company, the President of the United States is its CEO. However, the President doesn’t answer to shareholders, they answer to the American public. In what is sure to be quoted as one of his most famous lines, Trump proudly declared that he was “elected to represent the people of Pittsburgh, not Paris.”

To me, this declaration tells me that President Trump has an excellent grasp on his role as our President. Americans come first. Period. This doesn’t make him racist, xenophobic, fascist, or any other nasty thing you may want to call him because of his patriotism. It isn’t wrong to put American interests first. As Trump said in referring to the Accord: “Billions that should be invested right here in America will be invested in countries that have taken our factories and our jobs from us.” Trump gets it. Why should Americans have to sacrifice their jobs so other countries can thrive at our expense? Trump is being logical and sensible. America was built on capitalist, not socialist ideals. Freedom thrives in a capitalist society. Freedom dies in a socialist society. Wealth should be distributed based on hard work and merit. The last thing America should ever do is agree to have its own wealth redistributed to other nations. Artificial redistribution of wealth is not efficient, sensible, or ever successful. It’s a fool’s errand.

Trump looked at that agreement and saw the danger it represents. Modern day leftists are obsessed with the notion of global citizenship and the surrender of American power and strength in the name of achieving goals that are supposedly in line with global interests. Trump is sending a clear message to the rest of the world, calling our withdrawal a “reassertion of American sovereignty.” He also noted that withdrawal from the Accord “prevents future intrusions on the United States’ sovereignty.” Amen. The only people who should be dictating the rules to Americans are Americans. That’s the only way. We have a right to self-determination.

Though the media would have us believe otherwise, Trump didn’t win the election by some minuscule total or by benefiting from some outdated electoral system. He won because he struck a cord with many Americans. After 8 years of seeing our nation subjugated to the control of others, Trump reminded us that it’s ok to be proud of America. It’s ok to wave the flag. We are a nation, not just some large province in a larger governing body. Loving the United States doesn’t mean hating the rest of the world. Trump isn’t out to conquer the world or eradicate groups of people. He is simply trying to put things back into balance. Trump understands American strength…something that we almost forgot. Perhaps a better motto for him would be “Let’s remind America it’s great again.” We have always been the best, finally we are acting like it.

America is the greatest country on Earth. I’m glad we have a President who isn’t ashamed or afraid to say: “I have one obligation and that obligation is to the American people.” It would be naïve to think if we place restrictions on the usage of our own natural resources other nations will follow suit. If everyone followed the same rules that would be one thing, but it doesn’t work that way. If we prevent American companies from utilizing all their resources, they will simply go to a country where they can. It would be impossible to monitor and enforce a strict environmental standards. Perhaps one day we can find a fair and equitable way to address the environment.

I’m not going to address whether I believe climate change is real or not. All I know is that money talks. If investors believe withdrawing from the accords spells doom for Planet Earth, they sure didn’t show it. The Dow closed at a new record high. Interesting.

In Her Bubble, Kathy Griffin Thought Nothing Was Out of Bounds in Mocking Trump

Immigration: How Israel Does it Right