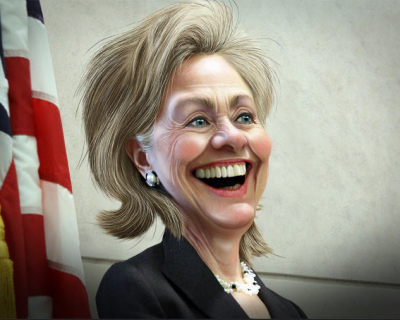 Will she ever leave us? Will Hillary Clinton ever cease her incessant cackling and stop leading from the ego?

Not likely and infinitely puzzling. When most criminals narrowly escape prosecution they disappear, lay low, change names or locales. The same is true usually with deposed, delusional monarchs who manage to escape their angry kingdom. Not Hillary, aided and abetted by a criminally irresponsible mainstream press, we are unfortunately likely to hear her wheezing cackle for some time to come.

Let us look at some recent cases in point that demonstrate the true madness of the self-crowned Queen Clinton.

On May 2, Hillary sat down with CNN’s Christiane Amanpour. This was her first major interview since her 2016 presidential bid loss. I thought some of her answers were priceless. I almost started barking with laughter. Consider some of these gems.

On her failed presidential bid, she commented: “ As (stats guru) Nate Silver concluded, if the election had been on October 27th, I’d be your next President.

Really Hillary? Did you need some extra days to examine the country’s voting machines? Embracing a delusion fervently does not make it come true. Regarding her defeat, Clinton further commented, “It wasn’t a perfect campaign-there is no such thing-but I was on my way to winning until the combination of Comey’s letter and Russian Wikileaks raised doubts in the minds of people who were inclined to vote for me, but got scared off.”

Scared off by Russia? Perhaps what scared the American people was the cold hard truth about your handling of highly sensitive classified intelligence information and your failure to provide adequate protection for Americans as Secretary of State. The American people saw how incompetent you are. We read the Wikileaks emails and saw through your lies and abuse of power. The huge speaking fees paid to your husband and selling Russia 20% of our uranium. Your pay to play scheme was revealed and there was no way the American people were going to put you back in power to continue selling off America. Wikileaks revealed the DNC voter fraud and the stealing the nomination from Bernie Sanders. We saw the collusion with the media and Donna Brazile giving Hillary debate questions in advance.

Of course Clinton claims she always takes responsibility for her failures, as she commented in the May 2nd interview, “Of course. I take absolute responsibility. I was the candidate, I was the person who was on the ballot and I am very aware of the challenges, the problems, and the shortfalls that we had.”

This statement is not taking responsibility for anything. It says nothing about your short comings, your lack of accomplishments or your lack of any real solutions to any of the world’s problems. You sound as sincere as when you took responsibility for the Benghazi attack. The four Benghazi victims and their families, including me, are aware of your challenges, your problems and your short falls. Face it Hillary, you were the facsimile candidate. Your candidacy was propped up by the DNC and the Fake news media as a sure thing without any question about your real qualifications or competency.

What we saw on May 2nd was Hillary Clinton as the angry, defeated candidate. Those with honest eyes see the heart of darkness that is the true persona of Hillary Clinton.

On May 26, 2017, Hillary Rodham Clinton gave the Commencement speech for the graduating class of her Alma mater, Wellesley college. Looking at the video, It is amazing to see the rapt, Stepford spell bound attention paid to Clinton by the students and faculty. They cheered and applauded her many lies without any hesitation like lemmings approaching the cliff edge. One can only shake one’s head and mutter that a mind is truly a terrible thing to waste.

Reading the text of the speech, I was amazed when Clinton referred to President Nixon with the following statement, “We were furious about the past presidential election of a man whose presidency would eventually end in disgrace with his impeachment for obstruction of justice.”

Let us have a moment of historic clarity, Hillary. The only President impeached in recent historical memory is your husband, President William Jefferson Clinton. Considering the fact you were fired for unethical behavior as junior counsel on the Committee to impeach the President, perhaps a bit of fuzziness is in order. Or maybe your memory is inflicted with an inconvenient truth.

Sad to say, despite the pathos and pathetic ramblings of this shambling former candidate, we may be stuck with hearing Hillary Clinton cackle for some time. Drunks and fools love the sound of their own voice and with the full support of the DNC and the fake news media continuing to ignore the truth, Hillary will continue to have a platform to lie and deceive. Hillary Clinton wants America to resist? I choose to resist her and her New World Order (NWO) tenets. In a recent May interview, Hillary said: “I was a victim of an assumption that I was going to win.” More sour grapes from a loser.

Former President Barack Obama is likewise out of sorts with his world socialism tour. He zips off to leg wrestle with world leaders like Angela Murkel. Even after finding out from Rep. Maxine Waters that he spied on everyone,and has a secret database of information on everyone, he is also given a pass by the DNC and the fake news media. He continues to ignore his true, historical legacy as one of America’s most facile Presidents.

If Obama and Hillary saw beyond their overextended egos perhaps they would disappear from the public eye. They are traitors to this country. They abused their power and have put us all at greater risk of another terrorist attack. Their crimes are far too onerous and numerous to consider here. We can only pray that the current administration no longer ignores the rule of law. Like Hillary stated during one of her rigged debates,“There should be no bank too big to fail and no individual too big to jail.”

It is time for President Obama and Hillary Clinton to slither back under a rock and consider disappearing before their insistent hissing sounds enrage the people to lock them up for their betrayals to our constitution and their abuse of power.