Democrat liberals and socialists absolutely hate the traditional image of a cowboy and it was especially used as a form of derision against Ronald Reagan. What aggravates them most is the world wide image of the cowboy in the films when he is standing for law and order, patriotism and God. I say world wide as there is an outstanding example in London’s Winston Churchill Bunker Museum. In a prominent place a large portrait hangs with a World War Two cartoon showing Churchill in cowboy garb holding two six shooters ready to fight off the Nazis.

On our first trip to England my wife and I were struck by a British Airways shop with souvenirs for Europeans returning home “Take back a true piece of America” a sign proclaimed and the main items on sale were cowboy and cowgirl clothing as well as Native American regalia. We have had friends visiting from England whose main goal was not to see New York City or Washington DC, they wanted to go to Texas to tour the Alamo. We need not bother to describe the clubs in Tokyo catering to patrons who dress in ten gallon hats, chaps and bandanas wanting to hear Western songs and line dance.

There is a recurrent theme in many of those great old Western films where an outsider is recruited to be sheriff or marshall and finds they have to stand alone against a gang of bad guys. We remember well films like High Noon where Gary Cooper has to stand against a group of gunslingers. A theme we also often saw in the John Wayne films when he had to take control of a town, even a whole county, to restore law and order. These heroes didn’t ask anything for themselves, it was a matter of being peace makers and using a gun only if it was necessary. Sometimes they were replacing a deceased of dishonest lawman and when you saw them on the screen you knew, “There’s a new sheriff in town.” 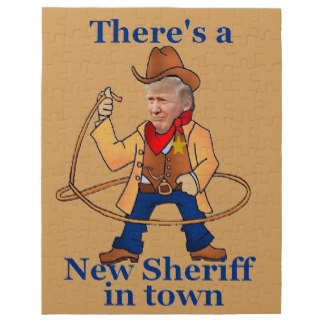 Remembering this I see a comparison to our new sheriff in town, President Donald J. Trump. Like those movie heroes he seems to stand alone out there facing off terrorism, socialism, Democrats and sadly some members of his own party. In the latter case these folks and many Democrats are like those town people who are too timid to take up arms. Only some may do so before the scene is over. Most just peer out their windows to see what is going to happen to the man who is there to protect their homes and their very lives and they appear unmoved. It would be so easy for President Trump to do what many a hero has been urged to do, “Hang up your guns you can’t beat ’em.” Fortunately we have a leader who has resolve. A Churchillian drive to save democracy and the free world.

It is easy to see why so many are drawn to Western films and TV shows today. Many of us lived during the golden age of the B Westerns when Roy Rogers and Dale Evans were king and queen. A period of time when you could depend on Gene Autry, Hopalong Cassidy, The Lone Ranger and others to save the day. These heroes all had something in common as described by Matthew McKensie in his book Creeds, Codes and Cowboy Commandments, B Western Rules To Live By. Liberals and today’s mainstream media laughs at such codes of honor as being outmoded and unrealistic.

What much of America misses are things those codes encouraged for young people to follow like patriotism, family togetherness, courtesy, clean habits and to honor God. This was reflected in those great film and TV shows. Though these virtues were not always verbally stated they were often shown visually. It was not uncommon to see in films grace before meals and going to church. Yes, we live in a very real world and there are dangers out there that are more than physical like greed, prejudice and bigotry. But the real heroes and heroines were above that.

When our president speaks of any of these virtues or even mentions God there is derision from liberals and the mainstream media. Even charitable acts by the president or his family are either ignored or mocked. Sadly there are too many who have not learned that there is a new sheriff in town and things can get better.

The real message for us from all those films and TV shows is that we cannot afford to just peer out the windows during the showdowns to see what will happen like those fearful town people. Our inaction will make us too late to improve things in our nation and our society. We need to get involved and take part in working for values that too many of us just talk about and how we miss them.

It’s surprising how many people we run into who miss those old Westerns, who loved the cowboys and cowgirls on the big screen or tube. They want a return of this kind of entertainment and across the nation there has been a growth of Western Media Events with stars to meet the public, have their films shown and fans clamor to see law and order, patriotism and a love of God restored. 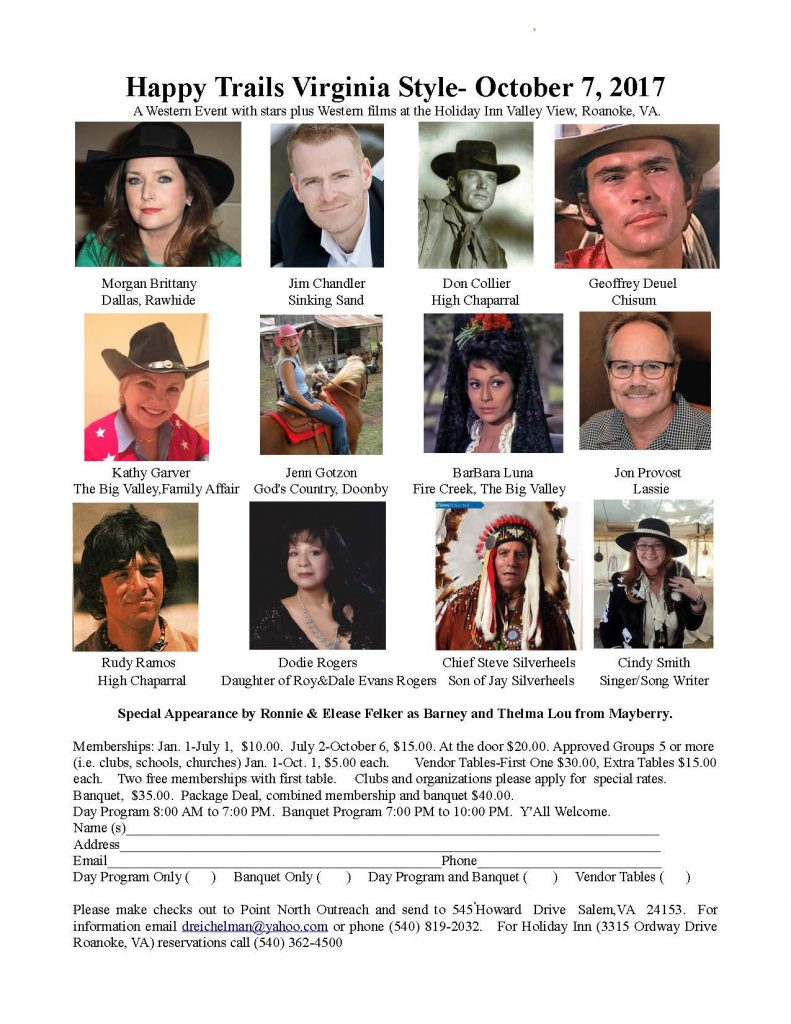 In order to potentially change that, I am working with a group of folks called “The Bunk House Gang” who desire to encourage new film makers to bring back those great stories by presenting nationwide Western Media Events.

On October 7, we’d like to invite you to attend Happy Trails Virginia Style in Roanoke, Virginia. Fans of westerns will have the opportunity to meet 15 guest stars of Western films and television shows past and present. Films will be run all day of great classic A and B Westerns including ones featuring John Wayne, Roy Rogers and some of the guests. There will also be an evening program of music, fun and dancing. Folks are encouraged to bring out the cowboy and cowgirl in themselves and dress accordingly.

Yes, there will be a PolitiChick or two taking part, including Morgan Brittany (who starred on ABC’s Dallas and, as a child, appeared on shows like “Rawhide” with Clint Eastwood) and Ann-Marie Murrell, who will be conducting interviews throughout the event.  We all believe in this mission, as does this old PolitiDude.

Who Defines 'Political Correctness' (and Why Should They)?

Low Testosterone and the Islamization of the West