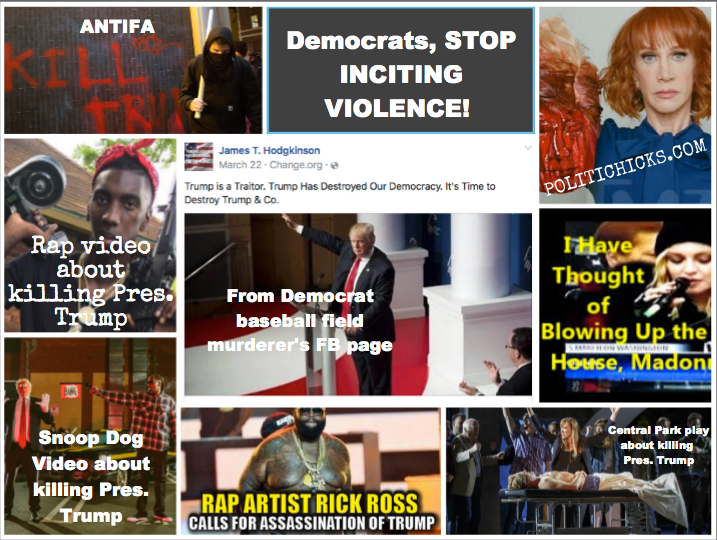 Out of curiosity, I started looking into cases where ordinary citizens (i.e. people who aren’t celebrities, government employees, or elected representatives) have threatened the President of the United States. While the elitists seem to literally get away with murder or at the very least, calls for murder, I doubt the same would apply to the average citizen. Why?

In President Trump’s case it would be debatable whether prosecuting celebrities for threats made against him would be productive. Given that the MSM has devolved into a leftist propaganda tool, it would give them even more reason to promote the false rhetoric that Trump is somehow an illegitimate President who operates in a chaotic and senseless manner. I actually think these people want Trump dead. What they are doing is extremely dangerous and my greatest fear is that some nut job is going to listen to all this nonsense and see it as a call to action. I do not believe the recent attempt on the lives of Republican members of Congress at a baseball field was part of some grand conspiracy. It was the actions of a lone nut. What happens when you rile up someone who is already unhinged?

What kind of person would shoot the President? Let’s look back on history.

The most famous cases are those Presidents who were actually assassinated:

Abraham Lincoln – Shot by an Actor

James A. Garfield – Shot by a Delusional Lawyer

Theodore Roosevelt – Shot by a man who believed he was acting under the orders of the ghost of deceased President William McKinley. Roosevelt was not President at the time but was running for President under the ‘Bull Moose’ banner. He created a major split in the Republican Party, which angered many and undoubtedly led to the election of Democrat Woodrow Wilson.

Ronald Reagan – Shot by a man trying to impress an actress.

It’s often been said that ‘it’s the quiet one’s you have to watch out for.’ That may be true and could apply in any number of cases, but in regards to people wishing to do harm to the President, I tend to agree with George Carlin’s observation that it’s likely to be a noisy one who actually kills you. Aside from a Manchurian Candidate scenario (which is only the stuff of fiction), I have never heard of a perfectly normal and quiet person suddenly going berserk and deciding they need to kill the President. No person who has ever shot a President could be classified as sane. Their descents in to madness were already well in progress before they ever aimed a gun at the President. All of them were very vocal about whatever they perceived as wrong with America. All of them were nuts and their motivations were insane.

Trump has been compared to Reagan. So, it is only fitting that I came across this gem of a court case that dealt with threats made against Reagan back in 1985.

In summary here is what happened: A disgruntled individual starting mailing what the court called ‘bizarre’ materials to local leaders in Phoenix, Arizona. Specifically, he mailed letters containing copies of newspaper articles, commentary on America, bloody depictions of Reagan, pornographic images and .22 caliber rim fire bullets. Essentially, it was a person willing to do whatever it took to grab people’s attention.Though not explicitly stated, apparently a Postal Worker brought these letters to the attention of the Secret Service. Unfortunately, this guy wasn’t a famous celebrity and as such he was indicted for and convicted of violating 18 U.S.C. § 871 (4 counts), 18 U.S.C. § 1716 (5 counts), and 18 U.S.C. § 1461 2 counts). He received a 3 year sentence. A description of each crime is as follows:

18 U.S.C. § 871 – It is illegal to mail anything containing threats to kill or inflict bodily harm to the President and those in the line of succession to the Presidency.

18 U.S.C. § 1716 – it is illegal to mail poisons, explosives, and any other material which could harm another individual.

18 U.S.C. § 1461 – It is illegal to mail obscene and crime inciting material. This includes obscene, lewd, indecent and vile material. The term indecent is meant to includes anything intended to incident arson, murder or assassination.

The initial ruling of the court was upheld in its entirety on appeal. The appellate court made the following observations in affirming the lower court’s decision:

Therefore, If I were to take the position that Twitter, television, e-mail, and postal mail are all covered under the above statutes, then Kathy Griffin, Robert De Niro, Madonna, Josh Whedon, Members of the New York City’s public theater participating in the bastardized version of Julius Caesar, Mickey Rourke, Johnny Depp, Marilyn Manson, Stephen Colbert, Sarah Silverman, Snoop Dogg, and most recently John Cusack, should all be indicted under one or more of the above charges. Their behavior is obscene and is intended to incite violence against President Trump. It is unacceptable. Period.