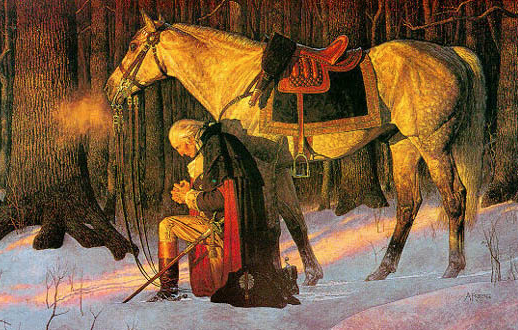 Washington, Jefferson, Adams, and Franklin. Those are names that should live forever in America’s heart. The mere mention of their names evokes images of a fledgling country trying to find its way…trying to find its identity. It’s easy for people born in this country to forget the debt of gratitude we owe to these men and their associates. Were these men perfect? Certainly not. They never pretended to be anything but fallible human beings. Were they the right men at the right time? Absolutely.

Their foresight and wisdom was such that it gave rise to the most powerful nation on Earth. Contemporary Americans, especially the vast majority of those born within the past few decades (and who have not seen military combat) have no concept of their good fortune. If you have always had it good, you really can’t understand what it’s like to struggle. Early Americans certainly knew about struggle. Early settlements such as Jamestown faced starvation and misery, but they endured. They had fortitude and willpower. More importantly they had character, courage, and common sense.

It took roughly 170 years for the fledgling settlements in North America to grow a nation. A country is merely a group of people governed by a single government whereas a nation represents a people with a shared past and a common culture. A country wouldn’t have been sufficient to defeat the British Empire and win independence. It took a nation of people with shared beliefs and a common purpose. The colonies developed a shared view that united them. A view that was rooted in the notion that America is exceptional…that there is something intrinsically special about our land and what it represents. Rather than hopelessly bicker and undermine one another, the American colonies coalesced into a united people willing to fight as one against the British.

Despite facing a much better equipped and far larger British army, the colonies prevailed and America was born. Early American history is really an underdog story. So much was accomplished so fast. It was built on hard work, ambition, and the willingness to take risks. It was built on the backs of rugged men and women who weren’t afraid to conquer a frontier. People didn’t come to early America to stir up trouble or undermine its existing culture. Early settlers came here to build wealth and a better life. They were driven by the capitalist spirit. More importantly they were also driven by the Holy Spirit. They also came here to practice individual and different interpretations of Christianity. Only a fool looks at their accomplishments, especially accomplishments in the face of overwhelming odds, and attributes their success solely to their own skills and abilities. The wise person understands that magnificent achievements takes more than human effort, it takes divine providence.

America had achieved status as a nation and following the Revolutionary War it was now time for it to take its rightful place in the world as a sovereign country. Our Founding Fathers designed a country governed by laws rooted in Christianity. The very existence, growth, and prosperity of America goes hand in hand with the Christian Faith. Contrary to popular belief the Constitution does not contain the precise words: ‘Separation of Church and State.’ In simple language, the 1st Amendment says that the government can’t establish a religion nor can it prevent the free exercise of religion. I seriously doubt the great minds who wrote the Constitution would in any way agree with the way their laws have been interpreted. Had some malcontent approached these men and demanded school prayer be revoked on the grounds that it offended them, and used the language of the 1st Amendment to support that argument, I believe the Founders would have simply ignored that person because they understood that you give attention to people in proportion to their numbers. They also understood what did and didn’t constitute actual persecution.

You can’t please everybody. In America’s past there was civility and dignity. Those with beliefs contrary to the prevailing views didn’t try to exert disproportionate influence. Certainly you didn’t have people going around speaking to crowds and urging them to disregard George Washington and you definitely didn’t hear public speakers give speeches that relied on exceptionally vulgar language in order to make their points. If there is a Christmas tree on public property why should it be taken down? Christianity is our nation’s foundation. People back in 1817 wouldn’t have complained about a Christmas tree in front of City Hall. If someone of a different faith legitimately obtains U.S. Citizenship that’s fine. As long as the practice of their faith entails peace and a respect for all humanity, their right to practice that faith should by all means be protected.

I do not believe anything should replace existing societal norms and practices derived from Christianity. If Americans migrated en masse to another country, they would be laughed at hysterically and most likely executed if they tried to change the existing culture of their new country. I completely understand why another country wouldn’t change to please new settlers. It makes no sense to change your society just because newcomers have problems with it. I believe in giving immigrants every chance to succeed, but we don’t have to be foolish either. There is a difference between supporting the efforts of immigrants to succeed and subordinating our culture to theirs. They have to take the good with the bad. Why should America always change to accommodate others?

There is absolutely no way the United States could have survived, let alone thrived if it had been designed by and governed by recent generations and extreme leftist groups. There is no way these individuals could have built a stable, let alone powerful nation. They wouldn’t have had enough sense to build forts. Many of these individuals reject Christianity in favor of secular philosophy that embraces the notion that a collection of disparate people with disparate beliefs can act as one. These individuals do not possess the philosophical, economic, scientific, legal, nor political expertise necessary to reach the basis from which they can formulate reasonable and logical ideas that we, as a nation, should pursue. This lack of knowledge is manifest in the notion of political correctness and the desire to see opposing views suppressed.

As a nation, Americans have redefined societal norms based on internal issues and motivations. Civil Rights and Women’s Equality have changed the opportunities available to all Americans. It’s ok for a nation’s culture and beliefs to change over time. I can’t see how it would be a good thing if contemporary America operated the same way it did in the 1780’s. At the same time, we are heading down a dangerous path where socialism and godlessness is embraced by half the nation while capitalism and laws reflecting Christian beliefs are embraced by the other half. A society does have to change over time but there are times when the population becomes hopelessly divided.

The voice of Abraham Lincoln is just as relevant today as it was in the early 1860’s: ‘A house divided against itself cannot stand.’ Lincoln faced a nation divided over slavery and he knew it was an issue that could not be solved by diplomacy. Lincoln better than anyone understood that the country had devolved into two factions: Anti-Slavery and Pro-Slavery. He knew that two opposing views, so radically different from one another, could not continue to co-exist. One had to prevail and sadly it would take violence to settle the issue. In his wisdom Lincoln knew the only path for our continued survival was to abolish slavery. He held the nation together and re-unified the country. I pray that this country…that this nation can find common ground once again. I pray it doesn’t come to violence but we can’t forget the lessons of the past…two distinct and radical ideologies cannot co-exist…one must prevail…one way or another.

The Stages of Jihad: A Well Organized Plan