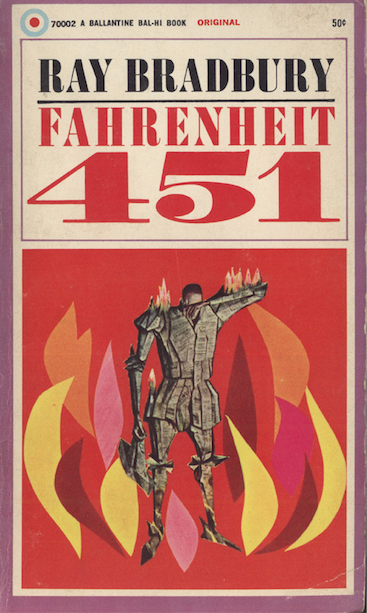 The events of the past decade has had a number of people making comparisons to the works of fiction writers such as George Owell and Aldous Huxley whose 1984 and Brave New World seemed to predict our world’s future. In the first book it is a government that controls education and the media with constant historical revisionism. It the latter it is genetic engineering to purify the human race. However, there is a third book that strikes closer to home in my opinion.

Ray Bradbury’s Fahrenheit 451 that came out in 1953 was aimed at the United States and takes place in Middle America, which some consider the last bastion of democracy. On the surface the book appears to be dealing strictly with book burning, and Bradbury admits to first being inspired by Nazi book burning and the Soviet Union’s purge of authors. His description of America seems a mirror of much in society today and even he admitted he was surprised to see people on the street with headsets listening to radios oblivious to what was going on around them.

The protagonist in Fahrenheit 451, a title derived from the temperature believed to catch paper on fire, is Guy Montag, a “fireman”. Not a fireman as we think of today, but one in the ranks of government law enforcers who were employed to burn books and homes that owned books. Montag is forced to question what he is doing when he meets a free spirited teenage neighbor named Clarisse who questions school because they are taught only “how” but not “why.” She also is concerned at how hedonistic and illiterate society is. Montag himself is familiar with some books because once a year a fireman is permitted to rescue a book to use as an example as to why they are bad. In his case recently it was an old Bible.

Book burning is not the only thing Montag is aware of. He lives in a typical neighborhood and his wife Mildred is a heavy drug user. She has over dosed more than once and this is common in the civilization as described by Bradbury. Mildred is also addicted, as are the majority of people, to watching inane television on screens that fill a whole wall. She and and her friends also stay wired in to programming where ever they go with headsets. Today we see people glued to cell phones wherever ghey may be.

Montag soon understands that people embraced strictly whatever was shown in films, on television and the quickening pace of life. Books were first abridged and kept short because of the short attention span people were developing and nothing controversial was to be permitted for reading outside of trade papers and sex magazines. Eventually all books were deemed bad for the public welfare. Ignored was the threat of nuclear war even when bombers were overhead as well as extremist groups seeking to gain control of the land through violence. Society had become indifferent, ignorant and callous to the needs of the nation, their loved ones including their children and to the nation’s history. Does any of this sound familiar?

Guy Montag’s wife Mildred cannot relate to his change in thinking and reports him to authorities. Their house is burned down and Mildred is in such a state of drug addiction she does not even notice that her husband has to flee for his life. That is when Guy recalls hearing about exiled book lovers who have established a community out in the country side. Led by a man named Granger, they have made it their mission to memorize books so that their true past and heritage will not be lost.

World wide war breaks out and cities are completely obliterated with the average citizen hardly aware they are being killed. Montag, Granger and their group are injured and dirtied from the shock waves, but they survive. In the end they find it their duty and responsibility to rebuild and hopefully learn from the past.

In his later years the author, Ray Bradbury, began to see the fulfillment of his worst fears and often commented on this in conventions and conferences. However, he was an optimist and his many stories reflected the ltime when people cared more about each other.

While Bradbury was noted for many works as well as being a Hollywood script writer, Fahrenheit 451 was considered his most outstanding receiving several awards. It was made into a Francois Truffaut film in 1966 and has been dramatized many times on radio. Ray Bradbury during his lifetime was honored many times including in the White House by President George W. Bush.

Of course the three authors cited in this article are not the only ones to have written about their concerns for our society. There have been many others and sadly many mainstream critics like to dismiss such warnings as science fantasy or the rantings of religious and political fanatics. For these writers we must pray for their protection to be able to tell the truth and hopefully under the new Donald Trump administration this will be easier than it has been the last eight years.