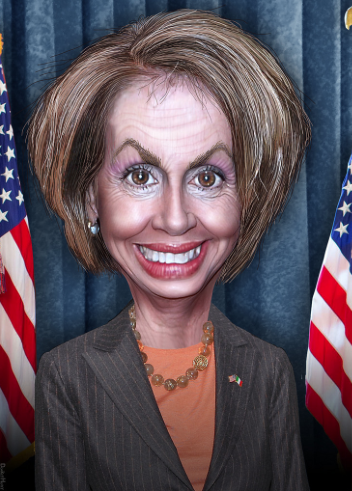 The Democrat Party is stumbling around and unable to find their way; they are losing more and more elections from mayor to city councilman to governorships to House and Senate.  They even lost the Presidency.

Now there is talk that the Democrat Party is ready to part ways with Nancy Pelosi.  You can imagine that Miss Nancy is having none of that silly talk; she even told Politico that she might have thought about retiring if Democrats had won the House, but she needs to stay all the more because the party lost seats.  Joked one Democrat (speaking on condition of anonymity), “If we keep losing seats, she’ll be here until she’s 90.”

Miss Nancy has said some silly things; here are just a few:

July 1, 2012: “Everybody will have lower rates, better quality care, and better access.”

October 13, 2011: (Regarding the Protect Life Act), “When Republicans vote on this bill today, they will be voting for women to die on the floor.”

And to top it all off, just this week Nancy was on national news mourning the “death of Rep. Scalise.”  (He is not dead.)

The Democrat Party, with Miss Nancy as their so-called “leader”, is ungracefully aging before our eyes and ears.  Another Democrat operative speaking on condition of anonymity (they do that a lot, don’t they?) said to Politico, “We no longer have a party caucus capable of riding this wave.  We have 80-year old leaders and 90-year old ranking members.  This isn’t a Party— it is a giant assisted living center complete with field trips, a gym, dining room, and attendants.”

Dixie Carter once said, “This is the South, and we’re proud of our crazy people. We don’t hide them up in the attic, we bring them right down to the living room to show them off.”  The Democrats are scheming to put Miss Nancy out to pasture, but I like her right where she is. She represents the Democrat Party perfectly.  It is time for us to circle the wagons and drive Miss Nancy.  Let’s sign up on the volunteer sheet; I will drive first.  Who’s next?

Outrageous: A Restaurant Owner and Teenage Daughter Viciously Assaulted Over A Chicken Order