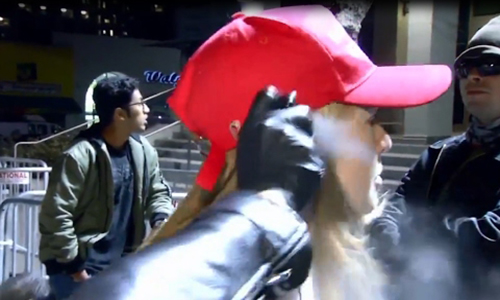 My very first print interview I did for PolitiChicks was with Catherine Engelbrecht from True the Vote. She created this organization in 2009 to ensure voter integrity and her site also documented voter fraud that was occurring across the country.

Well, the ‘powers that be’ didn’t like that very much. Catherine soon experienced 16 different audits from several government agencies (including the IRS). She never had any problems with the federal government prior to 2009 when she started True the Vote. The next thing she knew, she felt the boot of government on her throat. When I spoke to Catherine, she was overwhelmed and terrified (ANYBODY would be if government agencies were intimidating them the way they were Catherine and her family).

Soon after, it was revealed how the administration had weaponized these government agencies (the IRS, in particular) to not only target Catherine, but many other Conservative groups. That’s when we (Conservatives) all loaded up our cars, headed to D.C., and rallied on the lawn of Capitol Hill.

We sang “God Bless America,” we proudly waved our American flags, and we prayed together. It was such an amazing event, and I was honored to attend. At one point, my kids were up on stage with Rep. Louis Gohmert, Rep Stephen King, and Michelle Bachman.

After the rally ended, we picked up all of our trash and we all left peacefully. We did not smash any windows, we did not damage any property, we did not stab police horses in the neck, we did not throw urine on people, we did not pepper-spray anybody in the face, or threaten to harm anyone who disagreed with us.

For many years, we have been called “dangerous” and “racists” and “domestic terrorists” and all kinds of derogatory names (that I actually had to look up after our own POTUS called us these names… i.e. “tea bagger”). But, we powered on. We continued to gather. Peacefully. And we patiently used the political process to make changes rather than use violence, in spite of what the media and the administration said about us.

Yes, we were very angry at what the politicians were doing. And yes, we were passionate. I know I have said, written and posted stupid things that I probably regret today. But, politics stirs passions within us, it always has since the inception of politics. We are all human and we are all flawed.

Yet, we cannot and we should not ever use violence to impose our views on others. A healthy, robust debate is great. But when you use violence on unsuspecting victims to impose your views, you’ve already lost the debate because you’ve shown that your view isn’t worth a nickel.

I’m a proud Conservative who still believes that our rights come from God, not government. And that it is government’s job to secure our rights, not run our lives. As Conservatives, our solutions may be different from others. But, that does not mean that we are “dangerous” and worthy of a “beat down.” It just means that our approach to a problem is designed to empower the individual rather than the government.

Quite frankly, the normalization of violence against Conservatives is a bit alarming. And it’s really disturbing to hear some of the justifications for an attempted assassination on Congressional Republicans, all because of their approach to our nation’s healthcare crisis.

It’s also rather appalling for Conservatives to be lectured (by elitists) about “civility” when we have demonstrated it over past several years under extraordinary circumstances. Political activism and politically bullying are two different things. We chose political activism to try to make positive changes for our country rather than violence. Too bad the alt-Left can’t return the favor.

Daniel Greenfield: Moderates and Radicals in Islam and the Left