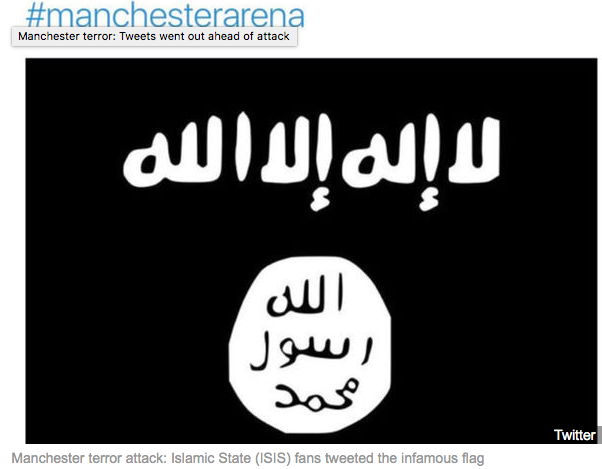 There was a ticking time bomb in Manchester. The old manufacturing city had become a safe space for Libyan Islamic terrorists with the knowledge and complicity of British authorities.

Before being one of the FBI’s Most Wanted Terrorists, Osama bin Laden’s Libyan body double had been living in Manchester. Anas al-Libi, a Libyan Al Qaeda terrorist, had received political asylum in the UK. Two years after he masterminded the bombings of American embassies in Africa, Manchester police turned up what would become known as the Manchester Document in his possession.

“Explosives are the safest weapon for the holy warriors. They strike the enemy with sheer terror and fright,” the Al Qaeda manual advised.

This was the advice that the “holy warriors” of Islam utilized against teenage girls in Manchester. The Islamic terrorist who carried out the massacre was a scion of the same terror group as Anas al-Libi.

When American forces finally caught up to Anas al-Libi, he was with the Libyan Islamic Fighting Group. But the LIFG was just as active in Manchester as it was in Tripoli. Manchester had long been a base for the Islamist terror group. And it comes as little surprise that Ramadan Abedi, the father of Manchester Arena suicide bomber Salman Abedi, currently in Libya, was also allegedly an LIFG member.

Despite LIFG’s blatant affiliation with Al Qaeda, its members were freely able to operate in the UK. Manchester, with its expat Libyan community, was a perfect base for the Islamic terror group.

Salman Abedi prayed at the Didsbury Mosque where his father Ramadan had been the muezzin. Salah Aboaoba, an LIFG member, claimed to have fundraised at the Didsbury Mosque. A friend who met Ramadan at the mosque described him fighting in the LIFG with the “Manchester fighters.” According to him, “Three-quarters of the fighters at the beginning of the revolution were from Manchester.”

The Didsbury Mosque based out of the former Albert Park Methodist Chapel is led by Imam Mustafa Graf who was accused of fighting in the Libyan Civil War. Graf had signed on to a petition to free “our brother Shaker Aamer”. Aamer is an Al Qaeda terrorist who had been held in Gitmo and had served under Ibn al-Sheikh al-Libi of the LIFG. In Manchester, Islamic terror begins and ends with the LIFG.

And not only in Manchester. Abdelhakim Belhadj, the Emir of the LIFG, was living in London. That’s also where the LIFG’s Al-Wasat propaganda newspaper was being published.

The British authorities had a complicated relationship with the Libyan Islamic Fighting Group that was conditional not on its terrorism, but on their approach to the Libyan government. The authorities viewed the LIFG as a potential resource when Gaddafi was an enemy despite the group’s ties to Al Qaeda. During that period, its Islamic terrorists were portrayed as political dissidents.

When a deal was reached with Gaddafi, LIFG was suddenly no longer welcome in the United Kingdom and some of its Jihadists even found themselves on a plane back to Libya. Once the UK got behind the Arab Spring, the LIFG was once again a band of plucky Islamist rebels overthrowing a dictator.

But the LIFG never veered from its Islamist ambitions. And its whitewashing by American and British authorities was the crime that led to both Benghazi and the Manchester Arena bombing.

Not to mention the takeover of portions of Libya by ISIS, Al Qaeda and the Muslim Brotherhood.

In ’03, Gaddafi cut a deal to disarm his WMD program. The insane Libyan dictator wanted to avoid becoming Bush’s next target. It was a wise decision. Not only did it benefit Libya economically and avoid a war, but the Libyan Jihadists who had been harbored in the UK suddenly became unwanted nuisances. The UK was now doing business with Gaddafi and it was happy to trade terrorists for contracts.

But the Bush era gave way to the age of Obama. And the two men had very different ideas about foreign policy. Obama’s New Beginning embraced an Islamist political continuum that began with the Muslim Brotherhood running for office and ended with armed Jihadists taking over entire countries.

LIFG Jihadists from Gitmo and the UK who had been turned over to Gaddafi were freed. But when the Muslim Brotherhood was unable to take over countries “legally”, it turned to violence. And Obama was eager to lend military aid to its efforts. The LIFG quickly switched back to a Jihadist insurgency and Libya fell into the hands of Jihadi organizations whose names were many, but who often had an LIFG link.

When the United States mission in Benghazi came under attack, leading the assault was Ahmed Abu Khattala. Khattala, like so many prominent Libyan Jihadists, had his roots in the LIFG. He was released as part of the Brotherhood’s “moderation” deal for the LIFG. The Americans who died in Benghazi were casualties of the Arab Spring and of Obama’s empowerment of Islamists across the region.

But the LIFG wasn’t done yet.

The British had incorrectly viewed the LIFG as a Libyan organization. But it was part of a global Jihadi movement. Its interconnections with Al Qaeda should have made that clear. The Manchester Arena bombing was the final brutal proof. Libyan Jihadists had no intention of stopping in Libya.

While Osama bin Laden lived under Pakistani protection, Al Qaeda was largely being run by Atiyah Abd al Rahman. Rahman was Al Qaeda’s chief of operations and a senior LIFG leader. As Obama’s Arab Spring was unleashed, the LIFG leader wrote a letter to Osama where he celebrated that, “Brothers from the Libyan Fighting Group and others are out of jail.”

“There has been an active Jihadist Islamic renaissance underway in Eastern Libya (Benghazi, Derna, Bayda and that area) for some time, just waiting for this kind of opportunity. We think the brothers’ activities, their names, and their ‘recordings’ will start to show up soon,” Rahman predicted.

On Rahman’s list of Islamic terrorists who wanted to go to Libya was fellow LIFG terrorist Anas al-Libi.

This was the newly moderate LIFG. LIFG Islamists in Libya won support from the US and the UK as they adopted “political roles”, but the moderate LIFG lie blew up in the Manchester Arena. Like many other Islamic terror attacks, its immediate cause was the harboring of Islamic activists in Western countries.

The UK had courted the LIFG. Then it had temporarily cracked down. Then it embraced it again. UK courts have demanded large payouts to LIFG Islamists deported back to Libya. But the Manchester Arena bombing by the scion of an LIFG family exacted an even heavier toll on innocent Britons.

The Manchester Arena bombing is yet another lesson about the cost of collaborating with Islamic terrorists. It should end our support for LIFG Islamists, Libya Dawn and its puppet regime. LIFG and Libyan Muslim Brotherhood members operating in the US and the UK should be investigated and expelled.

Our death toll from the Libyan Islamist intervention stands at 27 dead and over a hundred injured. We must ensure that the girls who died in Manchester will be the last of our casualties in that Islamist war.

Dr. Jamie Glazov: Would a Leftist Scream for a Victim of Sharia?

It's Time to Restore Security and The Constitutional Rule of Law