When Bernie Sanders first came to Vermont, he bought a shack with a dirt floor with unemployment money. Last year, Bernie joined the company of Vermont’s 1% and bought his third home. 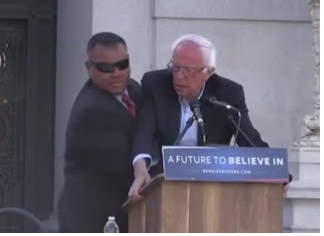 The money that Bernie used his way to break the $1 million mark and buy his way into the 1% came from the $27 donors he touted during his campaign. Other campaigns were funded by billionaires. But the folks paying for Bernie’s private Delta 767 with its menu of herb crusted lamb loin, chocolate ganache, fine cheeses and white wine were ordinary people who would never be allowed to fly on it.

Bernie could live large on their donations, but he couldn’t directly pocket their money. Not unless he figured out how to sell them something of his own. And that’s how Bernie joined the 1%.

Our Revolution, Bernie’s book, which was also the name of his new organization, sold for $27. According to Bernie, that was the average size of his donations. The actual number was $86, but truth and Bernie have always had only the loosest of relationships. And Bernie supporters were no longer giving $27 to subsidize a campaign, a cause, Bernie’s jet and his consultants, but his wallet and his summer home.

Bernie sold his supporters for $27 a head to a multinational corporation in exchange for $795,000. His book is named after Our Revolution, a 501(c)(4) “social welfare” organization that he set up to influence elections and which can accept unlimited amounts of money from donors without disclosing them.

According to Our Revolution’s former organizing director, it was set up that way to “take big checks from billionaires.”

Bernie Sanders can’t legally be involved in running his own organization. But he can cash in on a book which has the same name as that organization. The distinctions are bound to be lost on his supporters just as they didn’t understand what it meant when Bernie didn’t cap the commissions of his consultants.

There’s nothing with making a lot of money. Unless you’re Bernie, in which case you make money by insisting that it’s deeply immoral for other people to be making money. Especially the evil 1 percent.

Bernie made three times more than the people he has been denouncing up and down the country. Many of those dreaded 1 percenters are professionals who, unlike Bernie, work for a living, and also unlike him, don’t own three homes or fly private chartered jets around the world to meet the Pope

Bernie made more than the $735,607 average 1% income in Vermont. He didn’t just join the 1%. He joined the 0.5%. And he did it by monetizing his supporters. When he tells them that he’s fighting for the little guy, he neglects to mention that he means only one little guy named Bernie.

The average income in Burlington is $54,810. Bernie could buy and sell those little guys.

“The problem is that the great wealth and potential of this country rests with a handful of people,” Bernie ranted in ’71.

That’s still his theme all those years later. The 1% owned too much. Everyone else owned too little. But now he’s a member of that 1% which “takes home 13.8% of all the income in Vermont.” And he isn’t about to voluntarily redistribute any of it.

As Bernie told attendees at a United Way event back in his days as Burlington’s top dog, “I don’t believe in charities.”

The only charity Bernie believes in is his own “social welfare” organization that his book is named after. 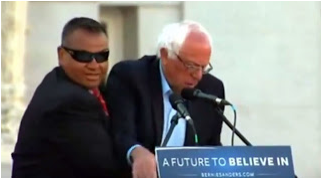 According to Bernie, government should be giving poor people money. Not Bernie. But don’t expect Bernie to give the government money either. He and his wife, who is under FBI investigation over the destruction of Burlington College, paid a total of $27,653 in taxes on $205,271 in income for an effective tax rate of 13.5%.

Bernie is an expert on what people who aren’t him need and don’t need. “You don’t necessarily need a choice of 23 underarm spray deodorants,” he bloviated during the campaign.

“How many cars do they need? Give us a break. You can’t have it all,” he tweeted after the campaign.

But Bernie can have three homes. He can put his name on a book, give little to charity and pay little in taxes.

The Socialist politician keeps his finances as opaque as possible. His summer home purchase was hidden behind the Islands Family Trust. He released as little tax information as he could get away with and dodged filing FEC campaign disclosures. Behind the rhetoric about wealth redistribution is a greedy little man who is expert at extracting money from government jobs and political dupes.

“I never had any money my entire life,” he once claimed. That’s still the image he likes to cultivate.

It just happens to be a lie. Bernie is lazy and greedy. That’s a bad combination. And it’s the source of his resentment. Those furious speeches aren’t outrage, they’re entitlement.

Now Bernie is finally a member of the 1% he has made a career of denouncing. But as a good Socialist, he knows that the real question is who did the work.

“I come from the white working class,” Bernie Sanders told CBS last year. But how can you be in the working class when you’ve never actually worked for a living?

Bernie was kicked out of a hippie commune for “sitting around and talking” about politics instead of working. He bought his dirt shack with unemployment money. And he doesn’t remember what job he was collecting unemployment for.

His only real paying work has been in politics. And the “work” part is still a misnomer.

But Bernie did write a book. And he made a lot of money. You can’t take that away from him.

Outsider in the House, Bernie’s old memoir, was “co-written” with Huck Gutman. Besides being Bernie’s Chief of Staff, Gutman is an English professor. And likely did the actual writing.

The book was written in 1997. And when Bernie ran for president, the same old book was dusted off and renamed Outsider in the White House. That’s exactly what you expect from a guy who got kicked out of a hippie commune and whose legislative accomplishments mainly involved renaming post offices. 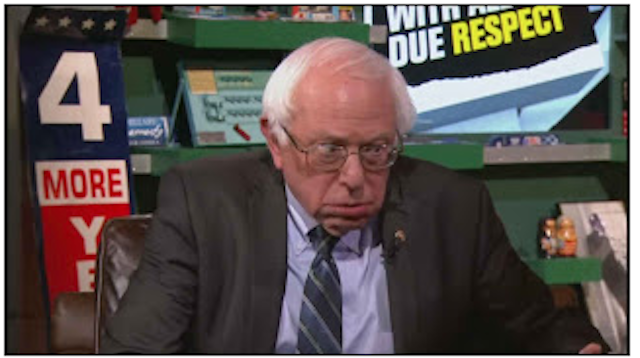 Bernie’s millennial fans were a little confused by all the rants about Gingrich and the Christian
Coalition.

But Outsider in the White House was at least somewhat honest about its authorship. Our Revolution, the tome that made Bernie a 1 percenter, lists no author. Like other politicians, you’re supposed to assume that Bernie wrote it in his own voice. Numerous reviews praise its authenticity.

Did Bernie break a lifetime’s habit and actually do some work? Or, like everything about him, is it a lie?

Our Revolution lists no co-author. But the website of Kevin Anderson & Associates, a ghostwriting firm, claims that copyediting on Bernie’s book was done by Thomas Cherwin. Cherwin is listed as a “Ghostwriter & Editor”. Did Bernie just happen to go to a ghostwriting firm for some editing or for some writing?

It doesn’t really matter. And we’ll never know for sure. But it would be fitting if Bernie joined the 1% only through someone else’s work.

Isn’t that the essence of Socialism?

AlfonZo Rachel Re. 10 Commandments in Arkansas: Michael Reed is a Bad Driver

Outrageous: A Restaurant Owner and Teenage Daughter Viciously Assaulted Over A Chicken Order