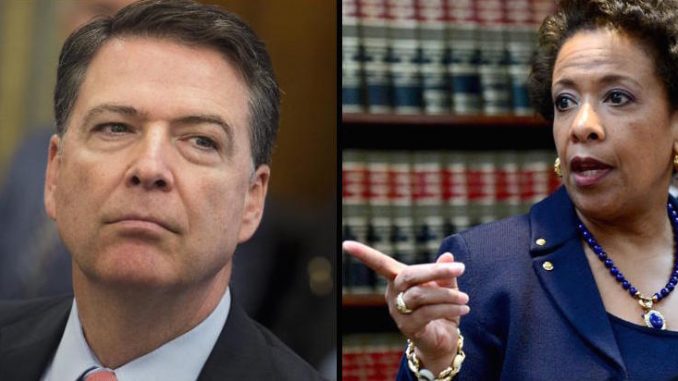 Circa News has broken a bombshell story concerning former Attorney General Loretta Lynch and former FBI Chief James Comey.  It seems that in private sessions with Congress, Comey has provided more information about dealings with Lynch over the Hillary emails. This convoluted web is becoming stickier as the days go by. Now Comey says that he was in possession of a memo that was sent to the DNC claiming that Lynch was putting a stop to the Clinton email investigation or “matter”.

“Comey told lawmakers in the close door session that he raised his concern with the attorney general that she had created a conflict of interest by meeting with Clinton’s husband, the former President Bill Clinton, on an airport tarmac while the investigation was ongoing.  During the conversation, Comey told lawmakers he confronted Lynch with a highly sensitive piece of evidence, a communication between two political figures that suggested Lynch had agreed to put the kibosh on any prosecution of Clinton.”

Comey said “the attorney general looked at the document then looked up with a steely silence that lasted for some time, then asked him if he had any other business with her and if not that he should leave her office,” said one source who was briefed.”
If this is true, then Lynch would be the party that was obstructing justice, not Donald Trump.  Have all of the distractions and side shows going on for the past year looking into non-existent collusion and obstruction by Trump just been ramped up to keep us from knowing the real truth about Loretta Lynch, Hillary and Bill and the Clinton Foundation’s ties to Russia?
If the Trump Justice Department doesn’t immediately start an investigation into this issue, then I want to know why.  This is a huge development and I guarantee you something will emerge from the Democrats to squash and bury it before it breathes any more oxygen.
Read more here: http://circa.com/politics/comey-privately-told-congress-about-second-confrontation-with-the-former-attorney-general
Share
Facebook Twitter Pinterest Reddit Share via Email Print

GOP Congressman Shot, Gunman Wanted to "Kill As Many Republican Members as Possible"