In 2014 Bill Whittle produced an excellent video about the way Democrats were ‘Gaslighting’ conservatives. Whittle explained that no matter what insane things Democrats did they were able to somehow manipulate people into believing that we–and not they–were the crazy ones.

Well folks, almost the moment news broke about James T. Hodgkinson, the Democrat/Socialist who went to a baseball field to assassinate Republicans, the mind games began.

CBS talking head Scott Pelley led the fight in deflecting attention away from the actual criminal.

In his calm, very “nightly news” way, Pelley said, “It’s time to ask whether the attack on the United States congress yesterday was self-inflicted. Too many leaders, and political commentators, who set an example for us to follow have led us into an abyss of violent rhetoric which, it should be no surprise, has led to violence.”

Pelley’s words were much like a rapist claiming, “She asked for it!”

Of course in these strange, schitzo political days, leftists and old-school Republicans are united in their hatred for President Trump and they, too, are trying to gaslight us.

GOP Congressman Mark Sanford went purebred crazy when he recently told MSNBC President Trump is “partially to blame for demons that have been unleashed.”

Parroting Democrat talking points, Rep. Sanford continued, “The fact is you’ve got the top guy saying ‘Well I wish I could hit you in the face and if not, why don’t you and I’ll pay your legal fees,’ that’s bizarre. We ought to call it as such.”

Again, Sanford was blaming President Trump for “causing” a seemingly normal man to go on a killing rampage. It wasn’t the normal man’s fault–it was Donald Trump’s for once talking about HITTING SOMEONE.  Lord help this country if more of these “normal people” watch a boxing match, or an action movie, or any Humphrey Bogart movie…

The good news is that there are many voices of reason out there trying to break through this nonsense.  On my personal Facebook page I posted an article written by conservative CBS radio host Chris Stigall entitled, “On the Contrary, Hate Has a Home”.  Stigall very succinctly wrote,

The man who attempted to assassinate scores of Republicans this week was not garden-variety mentally ill. He was politically active and mentally ill. He was a Bernie Sanders supporter who recently, passionately engaged in political campaigns and issues both in person and online. He cared deeply about politics just as I do, and I suppose you do if you’re reading this. But it’s time to be clear, fair, and honest about what’s going on rhetorically in this country.

There’s a woman named Michelle Carter currently on trial in Massachusetts accused of encouraging her suicidal boyfriend Conrad Roy, via text, to follow through with his plans to kill himself. “You need to do it, Conrad. You’re ready and prepared. All you have to do is turn the generator on and you will be free and happy,” she reportedly wrote. “No more pushing it off. No more waiting.”

Roy did tragically take his life the night of that text exchange. If a jury finds Carter guilty of pushing her boyfriend to kill himself, she faces 20 years in prison. For texting. See where I’m going here, Democrats?

If we’re going to have a discussion about tone and our rhetoric, OK, let’s have it, but it’s not going to be one-sided anymore.

Of course the article released the Krakens on my Facebook page with inane comments and memes like the following (I’m not including their last names but if you go to my page you can find them there):

Dan P:  It’s kind of hypocritical when extreme right wingers call for Second Amendment solutions to liberals only to bitch and complain when a left wing nut does exactly that to one of their own.

Kathy M: No one pushes people more toward violence than trump. He is the one to blame, and also those that want no gun restrictions.

My response to Kathy (pardon the CAPS): “So Kathy, do President Trump’s WORDS make you want to resort to violence? Do you believe his WORDS justify people saying they want to KILL him? Do you believe his WORDS justify someone trying to KILL all Republicans on a baseball field? If you answer yes to any of those questions, YOU are the problem, not President Trump.”

These people (and many more) are deeply insinuating that “rhetoric” from President Trump–and all Republicans–are to blame if they get blacklisted from speaking at colleges, or punched in the face by ANTIFA, or even shot at on a baseball field.

The latest version of gaslighting:  When did this start? 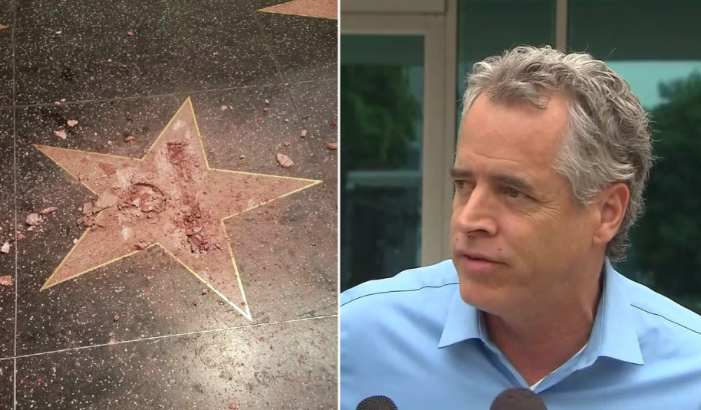 Remember James Otis? He’s the guy who took a sledge hammer and smashed then-candidate Donald Trump’s star on Hollywood Boulevard all to smithereens. Later Otis, looking very “normal” and more than a little smug, unapologetically held a press conference right there on the boulevard. His publicity stunt was covered by all the LA news stations, with Otis calmly explaining the reason he did his smashing was because Donald Trump promotes violence.

In other words, much like the ANTIFA movement has proved they are fascists, Otis substantiated his anti-violence stance by being violent.

James Otis began the precedence that violence against Donald Trump, even via destroying his star on a sidewalk, was “normal”.  Mainstream.  Acceptable.

When called out on their gaslighting tactics, leftists and left-leaning Republicans either denigrate Pres. Trump or they screech, ‘You did the same to Obama!’  Well, yes and no.  It’s true that most of us on the right completely disagreed with almost every policy Obama enacted.  We grew to distrust, disrespect, and yes, dislike him immensely as a politician.  But out of the hundreds of events and rallies I personally attended through the 8 years of his administration, I never heard anyone–ever–talk about wanting to kill the president. I never personally saw a burning effigy of him, never saw a rap video about killing Obama, never saw actors on television or in plays pretending to kill him, hiding behind that now-sacred word “art”. Nothing. Nada.

And yet people in media and elsewhere are basically justifying the actions of a man who tried to assassinate a field full of Republicans by claiming President Trump once talked about punching someone in the face and said he ‘hates the media’.

Apparently that’s all it takes these days to drive people to murder.

Be safe out there, friends; it’s a mad, mad world.

Rosie O'Donnell and the Left's Free Pass to Support Terror