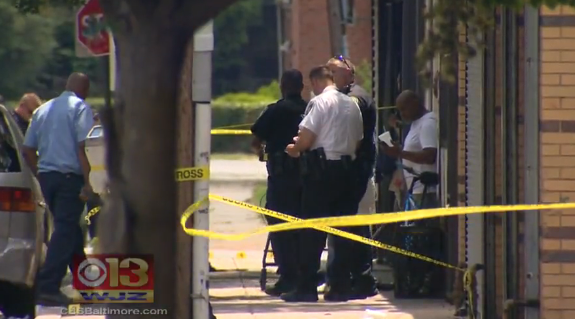 Baltimore sees multiple deadly shootings in just a matter of hours. It was a burst of violence that forced the commissioner to make a drastic move today.

All uniformed officers will be on mandatory 12-hour shifts, as the city hustles to control the crime.

Ava-joye Burnett reports the violence spilled over from the night into broad daylight today.

After a violent night, the police department announced a plan on how to address this problem, as the Police Commissioner was angered by the violence.

The violence in Baltimore started Monday evening and lasted through the night. It spilled over into the middle of Tuesday and by the end of it all, at least 12 people had been shot and at least six dead.

The victims include a 28-year-old man killed during a drug dispute on Bentalou Street, a 37-year-old woman killed in a bullying incident on Gertrude street and a man and woman– both in their twenties, killed during a quadruple shooting on Bonaparte Ave.

The police commissioner didn’t hold back or temper his tone.

“Quite frankly it pisses off the community, it angers us, it frustrates us,” says Baltimore Police Commissioner Kevin Davis.

Shortly after that passionate press conference from the police commissioner, there was another shooting in northwest Baltimore. That was around 1:30 p.m. in the afternoon.

Every patrol officer, detective, even administrative officers will put on uniforms and start patrolling the streets in 12-hour shifts, effective immediately.

One woman lives near one of the shootings. She thinks more police is a good start.

“It’s just really treacherous on these streets. A lot can be done. I wouldn’t give up on this city. I wouldn’t personally, living here all my life,” says Hope Aye, from Baltimore.

The commissioner said there’s a broken system that allows repeat offenders to get back out on the streets.

The commissioner also said this new expanded 12-hour shift where it’s all hands on deck will last at least through the weekend.

The commissioner says he believes the violence is fueled by guns, gangs, and drugs. Police are still looking for a motive in some of these cases.

As of Tuesday morning, there have been 159 homicides so far this year in Baltimore City, compared to 124 this time last year.

Beware of Those Mind Games, Republicans, Because That's What Leftists (and Some On the Right) Are Playing

Next Phase of Democrat Town Hall Craziness: Send In the Pagans