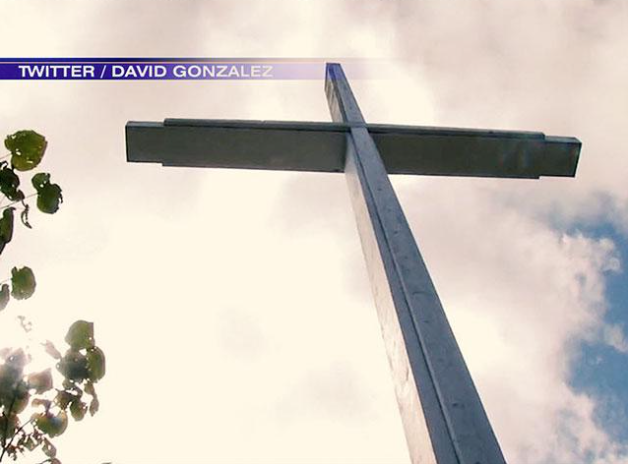 Perpetuating the lie ‘separation of church and state’, atheists once again prove there’s power in pushing states to do whatever they want them to do…

One question: if atheists believe in nothing, why does something they’ve deemed a ‘fairy tale’ bother them so much?

A massive cross that stood in a Florida park for nearly half a century is being removed.

A federal judge ruled in favor of the American Humanist Association and the Freedom from Religion Foundation on Monday.

The secularist groups filed a lawsuit on behalf of four plaintiffs in 2016. They claimed the 34-foot monument violated the so-called separation of church and state and was offensive to non-Christians.

Now, the city has 30 days to remove it from where it stands in Bayview Park in Pensacola.

The Lemon test states that a religious display on government-owned property must meet all three requirements to be constitutional.

There must be a secular purpose for the display, the display cannot advance or inhibit religion, and the display must not excessively entangle government with religion.

“Lemon is routinely criticized, but it is still the law of the land and I am not free to ignore it,” Vinson wrote in his order.

“However, after about 75 years, the Bayview Cross can no longer stand as a permanent fixture on city-owned property,” Vinson said. “I am aware that there is a lot of support in Pensacola to keep the cross as is, and I understand and respect that point of view. But, the law is the law.”

Vinson also awarded the plaintiffs $1 in damages. Two of them have moved to Canada since the start of the case.

The original cross was erected on that site in 1941 and court documents show that a civic group built the current cross in 1969.

Pensacola residents say they are disappointed by the court’s decision.

“I think that a lot of times the law gets weighted by a few people’s loud voices rather than the majority of people’s; especially people with vested interest in this area,” Jim Bradford said.

Priscilla Leibig stopped by to see the Bayview Park cross when she heard it was going to be removed.

“I wanted to make sure I got a little piece of history and it’s a memory for myself,” she told ABC News. “It just touched me knowing that this cross, a symbol of the cross that’s been here for 75 years and to hear that it’s being torn down is just; it hurts a little.”

“It’s very sad. It’s a sad day for Pensacola and for Christians all over,” she added.

Who Defines 'Political Correctness' (and Why Should They)?