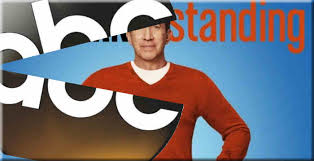 Television sure ain’t what it used to be.  Gone are the days of wholesome family values, strong fathers and mothers, lessons taught in a 30 minute story, musical fun without having to hide your eyes or turn the volume down so the kids won’t hear and awards shows where you aren’t beaten over the head with political rhetoric.  Yes, those were the good old days.  Unfortunately, the liberals and their agenda are in full force throughout the media.  In print, advertising, music, theater, news, television, film, books, internet, etc, we are bombarded with politically correct, leftist, Marxist garbage and the other side is effectively silenced.

At least for awhile we had “some voice” on television answering back and getting in the face of the looney left.  Tim Allen brought us “Last Man Standing”, a television show that has been on the air for the last six years and has consistently led in the ratings which helped ABC grab more viewers and advertising revenue.  Just last week it was announced that the popular Tim Allen show would not be picked up for another season and everyone including the cast was blind-sided.  How could ABC justify canceling a top rated show, a sure bet that had plenty of life in it and a great lead-in for anything new that ABC wanted to promote?  Don’t buy into the fall back line that producers and networks always use:  “the costs were just getting too high”.  Sorry, but I’m calling BS on that one.  For one thing, they already have their sets, it is a three camera show which has far less costs than a filmed drama and I can guarantee you that the cast, other than Tim were not making what the folks on “The Big Bang Theory” are making.  Bottom line is, if something is working, you make it work.  Especially if it has high advertising revenue.

So, what is left to justify the cancelation?  Gee, I don’t know.  You think it could have been something like this scene from a recent show?  (Watch more clips HERE.)

Perhaps when the libs sat in the screening room they just couldn’t handle the fact that their political correctness was being ridiculed AND that (gasp), God was mentioned!

Everywhere we turn our voices are being silenced.  If the left doesn’t like what we say, they shut us down, they fire us or they make our history disappear as though it never happened.  Remember when the “Dukes of Hazzard” show was in syndication on one of the cable networks?  It was on for years with people loving to re-live the days of the 80’s and the carefree, sometimes mindless entertainment it offered.  It was quickly pulled from the airwaves when the Confederate Flag became a symbol of hate.  The General Lee car sported that flag painted on the top of the roof but because of the “hatred and bigotry it represented”, the entire show was pulled off the air never to be seen again!  This is insane!  Are you with me?

When the shoe is on the other foot however, programs are never pulled off the air or even toned down.  Shows like ABC’s “Scandal” which rammed the idea of the first woman president down our throats this last season in anticipation of Hillary’s win (oops) or “Homeland”, which I used to like, that also had an incoming woman president.  That show recently started showing America as an evil, corrupt, bigoted country which wasn’t the intention when it started airing.  The subliminal messages are always there, but they aren’t so subliminal anymore, they are in your face.  The evil police, the overly aggressive military, the racially insensitive “white” people, the crazy, lunatic religious leaders, and the stereotypical southern, “redneck, uneducated” bigots who always are at the bottom of blowing something up.  Are you as sick of this as I am?

When the word came out that “Last Man Standing” was on the chopping block, folks from all over rose up and made their voices heard.  Petitions were signed and sent to the network demanding that the show be kept on the air.  Well, perhaps all of us making noise does make a difference.  As of today, the show is being shopped around to other studios and networks and it may have life it it yet.  There are rumors that outlets like Netflix or other cable networks might be interested.  According to the way things are going, cable and streaming services are putting the big three networks out of business anyway.

We cannot just stand by and let the left dictate to us what they want us to watch.  If you look back at the era’s of the 70’s and 80’s there were programs for everyone.  If you leaned to the left  you loved the Norman Lear shows like “Archie Bunker’s Place” or “Maude”.  If you were more conservative, there was “Touched By An Angel” or any number of Aaron Spelling Shows that would bring back the glamour of the past.  There were historical movies of the week and mini-series that would appeal to a majority of viewers, books turned into epic events and musical specials that everyone could enjoy.  Now the powers that be want to take away your choice.  Your choice is dangerous and therefore must be silenced.

Your children are also being taught through their programing that the left’s way is the only way.  We have already lost the narrative on global warming because from birth our children to conditioned to believe in “climate change” and anyone who doesn’t buy into it should be shunned.

We have a fight on our hands folks, but there is hope with this latest dust-up surrounding “Last Man Standing”.  Let’s keep making noise and let’s make them hear us.  We can make a difference and if we all pull together, we will.

Daniel Greenfield: Good vs. Evil in the Supreme Court