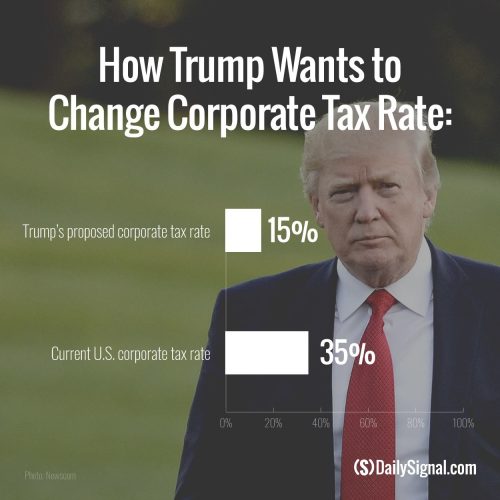 The White House released it tax reform proposal on Wednesday that envisions deep cuts in the rates paid by American families and businesses. This plan is fantastic in my opinion.

President Trump’s economics team said the blueprint would reduce most Americans’ tax filing to a single page, make businesses more competitive in the international economy and entice trillions of dollars of investment back into the U.S.

1.Our tax code is so complicated, even IRS officials complain about it. American taxpayers spend $409 billion a year just to figure out what we owe in taxes. There is also a 67% increase in the amount of time it now takes to fill out a 1040 form since 1988. That’s insane!

2.Speaking of the IRS, lest we forget how the Obama administration weaponized government agencies like the IRS to target and intimidate Conservatives. All the more reason why I’m in favor of abolishing it altogether.

3.I love that Trump’s tax proposal phases out the ‘Death Tax’ (which is really theft) and decreases the corporate rate to 15-20%. This will be great for small businesses that have been strangled under the boot of government over the past several years. Businesses will be able to take that money saved and invest it into market research and into expanding their businesses, which will promote job creation and stimulate growth in our economy.

4.Our Progressive tax system is really unjust. Demagogues love to say they are going to “stick it to the rich,” and it’s an effective tactic during the election season. Today, nearly half of Americans pay no income tax at all. And 10% of all earners pay 70% of all income tax. It’s astounding that in our country, people who pay no tax at all can vote for tax increases on fellow citizens who DO pay taxes. I’d love to see a ‘flat tax’ or a ‘fair tax’ implemented in my lifetime (which is probably a pipe dream).

6.Jesus even loves tax collectors. I guess this means we should also hate thievery and bullying, but still love the thief and bully in spite of themselves.

Disclaimer: I’m no tax expert. These are just random thoughts based on facts that I have gathered.

Can You Spot The 800lb Elephant Missing From The Latest RNC "Trump Agenda Survey"?