Today is Memorial Day, as we make preparations to commemorate our courageous men and women in uniform and thank them for their invaluable service and immeasurable sacrifice, it’s important to remember the “unsung heroes” of the US military. Most often, this term is applied to the families of US service members, and it’s easy to see why. Those are the people who serve in their own war when the nation is engaged in combat, having to go weeks or 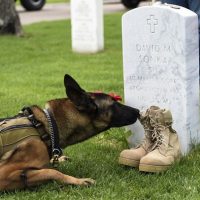 even months at a time without knowing whether their loved ones are still alive – and always dreading “the call” from their family member’s superior officer, telling them news too horrific to process. But there’s another group of heroic warriors that we all too often fail to recognize, in our understandable (but still incomplete) preoccupation with the human participants in war. That group is man’s best friend – the dog.

Dogs have been trained to perform various tasks in war – including but by no means limited to combat – since ancient times. The United States has not failed to recognize the contributions which these amazing animals are capable of making; however, it’s only since 1942 (when the country’s wartime needs were, of course, particularly grave) that an American war dog training program has been in operation. This program trains dogs to give them specific skills for use in war, such as acting as sentries, attack or tactical dogs, scouting, and casualty searches. When these dogs complete their training and make it out to the field, they face the same horrors and sacrifices that any human must make: the stress of being away from home, the risk of injury or death, and the loss of brothers who fall in combat – for human service members readily refer to their dogs as family, and know the dogs feel the same way.

There have been many distinguished canine warriors in American history, including the courageous Sergeant Stubby, who is sometimes called the “Original War Dog”. While living as a stray, he met his human, Corporal Robert Conroy, in Virginia. The two quickly became best friends, to the point where Conroy could not bear to part with Sergeant Stubby after he finished his military training. He smuggled the dog aboard his transport ship, taking him with him to Europe – to fight in World War I.

Despite having no formal training (this was before the US began training war dogs), Sergeant Stubby excelled in the combat theater. He seemed to know when artillery fire was incoming, when mustard gas was near, and even when enemy soldiers crept close. He could even root out spies: Stubby was able to correctly identify a German soldier who had infiltrated American ranks and was wearing an American uniform. Everyone in Stubby’s unit loved him, and in time, even came to rely on him as a canine brother.

Other outstanding war dogs have gone by the names Tarzan, Ali, Jerry, and Elmo, among many, many others. These dogs have fought bravely alongside beloved US soldiers, and many have even made the ultimate sacrifice without a moment of hesitation– just like their human brothers in arms. And like these brothers, they are not forgotten after their service is complete. Those who make it through military duty are de-trained to reduce their aggressive tendencies, and can look forward to careers in law enforcement, therapy, or simply adoption by a loving family so they can enjoy a well-earned retirement.

Let’s not forget these brave canine heroes as we celebrate Memorial Day. We are indebted to them as we do our human men and women in uniform, and they rightly deserve our gratitude, our appreciation, and most of all our love.

Terrorism, Treachery, and the Struggle to Keep American Patriotism Alive