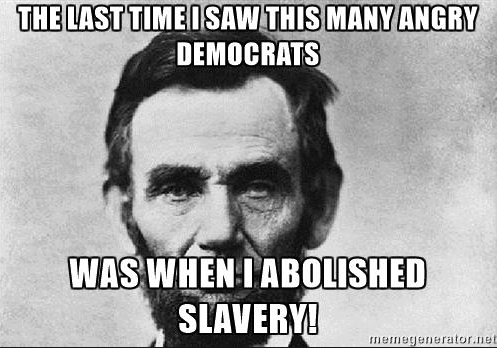 The notion of the ongoing and upcoming chronic temper tantrum that will be thrown by the Left for at least the next four years has been established. There is nothing that Donald Trump and his administration can or will do that will not send them into a screeching frenzy reaching for the smelling salts. And we know all too well that when one uses the term “the Left”, you are including the mainstream media. It is one big toxic mix.

The latest possible end of the world comes in the form of the Republican health care bill. The Democrats are dragging out the usual talking points because hey, if it works, why mess with it? We are familiar with the drill. Republicans want to kill old people, sick people, kids, and poor people. You can bet that it will only be a short amount of time before we see that golden oldie commercial portraying a Speaker of the House Paul Ryan look alike shoving Granny out of her wheelchair over a cliff. The Democrat mantra, “PEOPLE WILL DIE!” is everywhere. You could set your watch by it.

But in the age of Trump, even the most seasoned and hardened political veterans will say they have never seen this level of hatred and vitriol on display. Anything is fair game, and any ends justify any means. We hear endless stories of people wearing Trump shirts or hats, or something else that identifies them as Republican or conservative, and they are threatened, their possessions are vandalized, and they are often beaten. Death threats and other serious offenses are issued, sometimes by well-known people and they do not take them back. They double down on them. The level of violence will continue to ramp up. Republicans and conservatives are portrayed as crazed nut jobs. What if, in the wake of continued Trump successes, the unthinkable, the ultimate act of protest takes place? Would it really be that big a stretch?

The healthcare bill is merely the first example, and along with any subsequent legislation, it is a jumping off point. What happens when someone who believes every bit of false information that liberal Democrats fling up against the wall decides to take matters into their own hands and decides that people who identify themselves as Republicans and/or conservatives must be taken out? Literally.

That toxic mix of radical Leftists and the media would most definitely have blood on their hands. But would it even be reported? Would it occur to anyone that they were indirectly responsible for it? Would they be worried about copycat crimes? Would they already have a suspect in mind in the form of a crazed left-wing nut? The answer to all of these questions is no. No one would take any responsibility for anything they said or did. Somehow the victim would be held responsible for their own death. After all, if they had not been wearing that “Make America Great Again” hat….. We would be lectured that because of the policies of the Trump administration, the perpetrator was driven to do what he did. He felt he had no other choice. Gloria Allred would take the case on pro bono. Bottom line, the perpetrator would attain hero and martyr status.

Right now this is a purely hypothetic scenario. While no rational person advocates violence, think about the path we are on. Every act taken by this president and this administration is met with more and more pure hatred, no other way to describe it. How far away from this are we really?

We know that liberalism is full of unintended consequences. In this case, it would just be collateral damage.