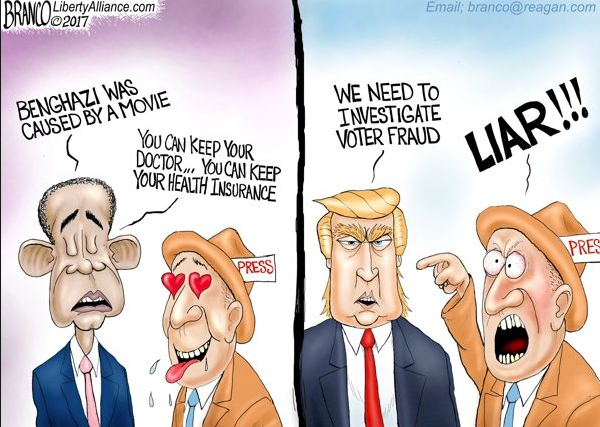 Once again, the MSM ‘goes after’ President Trump in its repetitive, often incoherent and sometimes vicious manner with their attempted ‘gotcha’ questions. This time it occurred at a May 16th press conference with General McMaster who was there to provide more details about the President’s upcoming international travel itinerary.

While the upcoming trip by the President is indeed historic, the only questions posed from the MSM were not about the trip but were about the Washington Post article’s accusation that the President gave classified information to the Russian Ambassador at their meeting last week. The General repeatedly assured the Press that there were no issues of concern regarding information given to the Russian Ambassador and that the information given was ‘wholly appropriate’. The MSM, however, in their typical ‘we are going to get the President’ fashion, ignored reassurances from the highly respected General and continued with their diatribe of questions/accusations in their attempt to mis-portray and harm this presidency and, I believe, with special focus on trying to undermine this President in his foreign relationships just prior to the historical international trip he will begin on May 19th. There was only one question pertaining to the search for the ‘leaker’ who, I believe, committed a felony.

An important point …. Just hot off the press while I was writing this …. The NYT just revealed that “Israel Was Source of Secret Intelligence That Trump Gave to Russians, Officials Say”.  This is the same press that was just questioning Trump’s decision to convey intelligence to the Russian Ambassador. The Press just leaked the alleged ‘source’ of the intelligence to the World!

I cannot help but wonder what real purpose the MSM has in regards to the dissemination of valuable, unskewed and non-politically driven information to the general population. With all of the real unbiased news out there to report, they only focus on any issue for which they can conjure up questions with the hope to show this president in a negative light. Where are the questions about things that people like me would like to hear about such as the economy, education, growing gang violence and lawlessness, growing drug addiction, infrastructure, national security and the serious threat of radical Islam?

Why are they not questioning the continual ‘leaking’ coming from members of the government, much of it putting our nation at risk? Why are they not questioning the clearly politically driven unmasking of names of Americans to a wide array of agencies within the government and ultimate leaking to the Press. Why are they not questioning the expansion from 3 agencies to 17 agencies who receive this unmasked information clearly for the purpose of increasing the potential for leaking and making it more difficult to pinpoint the leakers, by then President Obama just several weeks before the end of his administration? I find this not only appalling but, if investigated properly, I believe that high crimes will be shown to have been committed, not by those who were spied upon but by those who did the spying. I use the word spying because that is exactly what it was and for political purposes.

Why are they not questioning the judges who put a stop to the 7 (now 6) country temporary travel ban which made perfect sense in the effort to keep Americans safe (keep in mind that these countries were previously identified by the Obama administration)?   We all know that had Mr. Obama requested this travel ban, no lawsuits against it would have been filed. The current objection is strictly political and everyone knows it. This is yet another reflection of the reason why President Trump won the election. People like me are sick and tired of the games played by the members of ‘The Swamp’. We have had enough of this nonsense and would like nothing more than these ‘Swamp Members’ to be replaced with true patriots who genuinely care about the citizens of this country and the country itself. We are tired of the ‘Swamp Members’ cavalierly toying with our futures as though they are playing just some board game. Sadly, the levels of their games are more akin to Candyland than they are to Chess.  The answer to why they are only focusing on issues/questions to try to undermine and disgrace President Trump is obvious …. to use a newly popular phrase, ‘They carry water for the Left’.

These ‘Swamp Members’ are not only MSM and Democrats but include some members of the Republican Party. I used to have high respect for Senator McCain but I think that he is beholden to the same powers who control the Clintons and others and would like nothing more than to see this presidency fail.  I might add that he may also be jealous of the President for achieving what he failed to achieve in the 2008 election. I believe that this jealousy and resentment has also been clearly conveyed by Romney, Kasich, Graham and others (although Graham seems a bit happier since the President’s decision to bomb Syria and Afghanistan).  I am sorry that their feelings are hurt but it is time for them to get behind this President and do what is best for the citizens of our wonderful country instead of helping the Left run it into the ground. We are at a very critical time and it is crucial that they work together for the benefit of ALL who still believe in the values of the United States.