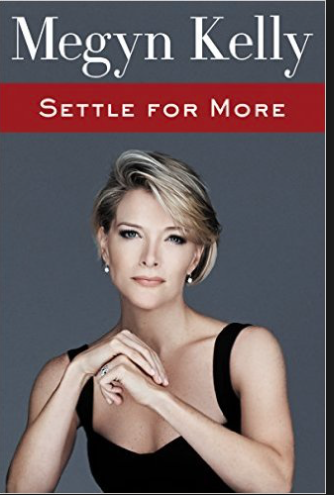 Since the age of fifteen I’ve known I wanted to be a journalist. I started watching the Kelly File in its first year and loved it. I watched it every night I could. Megyn Kelly became my role model so I was very excited to read her book when it came out.

The title of Kelly’s book, Settle for More, comes from the something Dr. Phil once said which caused an epiphany in Kelly’s life sparking the career change which is why she is a household name today. Dr. Phil, during an interview on Oprah said, “The only difference between you and someone you envy is, you settled for less.”

“It was so simple, but so clear to me-this was the moment when I realized I could change my life. I did not have to settle for less. I could settle for more,” writes Kelly. Kelly details her life from that moment recounting how she learned to “settle for more” in her career, in her relationships, as a working-mother and beyond.

Many do not know it but before she was a prime-time news anchor, Kelly was an unhappy lawyer. Kelly had always wanted to be a journalist but she was rejected by Syracuse University’s Newhouse School of Communications, so she entered the Maxwell School of Political Science and later went on to law school.

Kelly wrote of her experiences prior to her epiphany, including being bullied in 7th grade after her father’s death during her teenage years.  She also wrote of her struggles through law school, and moot court. I can speak from experience, as I have done moot court myself.  Moot court teaches you how to formulate a good argument, and how to speak calmly on a topic you are passionate about, as well as how to see both sides of an issue, all are crucial skills for a journalist.

Throughout her career as a journalist Kelly would pull from her experiences prior to her career change. Kelly details her tumultuous relationship with Trump and lays out both sides of the story, like a true journalist. She explains her reasoning behind her decisions as well.

Kelly also delves deep into her personal life including her first marriage and how it ended on good terms, and later how she met and fell in love with Doug Brunt, with whom she has three children. She gives the reader a look into her life as a working mother and how she “does it all” which she explains she really doesn’t.

Kelly doesn’t sugar coat the facts about being a TV journalist and working-mother, making sure readers understand that it’s not all roses and diamonds. Kelly details how during the first Republican primary debate she had a trash can at her feet in case she threw up again, as she was feeling very ill prior to the debate.

Kelly also goes into her experience with sexual harassment at Fox, how she handled the situation and the role it played in the ultimate resignation of co-founder Roger Ailes.

In her book, Megyn Kelly is exactly as she appears to be on TV.  She’s real. She may be prime-time journalist, but she’s also a working mother. With Kelly, you get exactly what you see.

My one criticism of her book is that at times her tone seems a bit prideful, and may be off-putting to a less gracious reader.

Kelly’s career is demonstration that life truly is what you make of it. “You can use the difficult times to shore yourself up, to prove to yourself you can handle anything, or you can lament your bad luck and cry in your soup about life being unfair. One is productive, and the other, most certainly, is not,” she writes.

This is what Kelly has done through ever trial she has encountered – she has pulled on her difficult experiences to “shore herself up.” May Kelly’s successful career inspire everyone to “settle for more,” for I believe that is her living legacy.

Is There Any Ethical Value for the Current Mainstream Media to Continue to Exist?