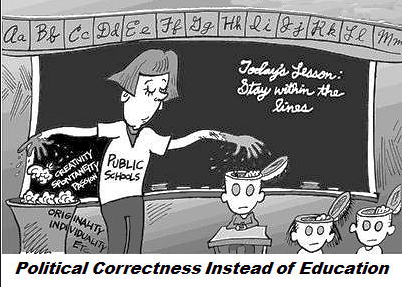 There is a malignant virus that is spreading throughout this country. It is flourishing and mutating in the hothouse atmosphere of America’s institutions of “higher learning,” and it threatens the health of American society in a way that is new and intensely ominous. It attacks the nervous system and the vital organs of the living organism that is American civilization by using our educational system as its host and by attacking our very future by feeding upon our youth. What has happened to our colleges?

The invasion started with the advent of “political correctness.” Its purported purpose was to refocus our language — and behavior — so as to not inadvertently offend the easily offended. So, for example, those who previously had declared they wanted to be called “black” announced that henceforth the “politically correct” appellation would be “African-American.” Some women decided that the inclusion of “men” in pronouns and titles was demeaning and we wholesale changed our references to gender-free, if cumbersome, titles such as “chairperson” instead of “chairman.” It all seemed rather benign in the beginning. Even if you didn’t agree, you could shrug, laugh and say that if it made them happy, what difference would it make. Forgetting that he (she?) who controls language controls thought, we blithely assumed that life would go on as usual.

It quickly escalated. Universities began imposing speech codes, condemning the use of language previously assumed to be innocuous. Every year, the list of banned words and phrases grew. Interestingly, the “restrictive” right wing did not seek these restrictions; rather, those who called themselves “liberal” and “progressive” were behind these changes. All of a sudden, colleges shifted from free and open societies emphasizing free speech and thought to the Orwellian world of “1984,” with its draconian use of propaganda, disinformation, denial of truth and manipulation of history to control the minds of their students. Instead of being institutions where students were free to make up their own minds on issues, colleges began to be run by the “thought police.” Students were not taught how to think, but rather what to think. They were told what thoughts were acceptable and punished if they deviated from the norm. In one university, a student was expelled (or was he merely “suspended”?) for “inappropriate laughter”! And it has steadily and progressively (pun intended) gotten worse. We have now reached the stage where, on an increasing number of college campuses, intolerance has become the only thing that is tolerated.

A few weeks ago, I happened upon a newspaper article headlined: “Cal. prof. declares: Trump must hang, Republicans should be executed for each immigrant deported.” The article was about Lars Maischak, a history professor at California State University, Fresno, who called for the death of Donald Trump to “save American democracy,” and went on to say that the “cure” for racist people is a “bullet to their head.” Presumably, Mr. Maischak reserves to himself the judgment as to who qualifies as a “racist.” One could argue that this fool is an outlier — an exception to the rule that academe is a haven where all opinions are debated in a civilized and cultured manner. One could argue that … and one could then be justifiably accused of having his head stuck where light never penetrates.

Professor Maischak is increasingly typical of the very sort of individual that is being given the task of “educating” our next generation. This is not an exaggeration. We hear of more and more misfits who achieve tenure at our universities. What do they teach? Pick up the latest course catalog from many of these institutions and you will find a plethora of Saul Alinsky-type offerings. But even if a student avoids such course offerings, he could find himself as a captive in the classroom, on the receiving end of a leftist diatribe provided by an English, math or sociology professor, having nothing to do with the subject matter of the course described in the catalogue. What matters are the political predilections of the teacher, not the academic requirements of a legitimate syllabus.

And what about the invitations proffered by student organizations to speakers, requesting that they come to campus to speak about issues that are of concern to them? Too many of these speakers, e.g., David Horowitz, Ann Coulter, Ben Shapiro, etc., are hounded from the stage by those “snowflakes” who have decided that since they don’t like what the speakers are saying, they should have a veto on what others may hear. Never mind that no one is forced to come to listen to these speakers.

Recently, we witnessed outbursts of violence at Berkeley, complete with hoodlums dressed in black, wearing facemasks and chucking Molotov cocktails, trash baskets and benches at every pane of glass in sight, not to mention at any human being passing by who was not an active participant in the violence. All the while, the police stood by while the mayhem continued. All this to protest the arrival of a conservative speaker on the campus, who might not parrot “acceptable positions.” This mind laundering is a threat to the future of this country and it must be reversed.

Universities all across the country are shutting down freedom of speech and thought in the name of “diversity” and “coexistence.” But there is no diversity of thought and there is no coexistence. Conservatives, Christians and Jews are fair game for the leftists and anarchists on campuses, who only see our First Amendment rights of freedom of speech and freedom of religion as protecting leftists and Muslims. Now, the virus is mutating in a direction that is even more ominous and frightening. Jew hatred is at a higher level now on many campuses than it has ever been and it has become acceptable for Jews to be the designated scapegoats on many of today’s college campuses.

Just recently, I attended a hearing at the South Carolina Capitol about House Bill H-3643, which defines “anti-Semitism” and requires that various institutions (primarily universities) consider that definition when determining possible violations of codes of conduct. It does not restrict speech; it does not restrict actions. It merely provides a definition against which speech and actions can be determined. The bill is opposed by organizations such as Students for Justice in Palestine, a terror-supporting subsidiary of the Muslim Brotherhood and by the ACLU. The woman who testified for the ACLU argued that if the legislature accepts a definition of anti-Semitism, it opens the way for a request for a definition of “Islamophobia.” My reaction was that I would be all for it, since right now, “Islamophobia” has become a utilitarian accusation for anything that the Left doesn’t like, like “racism” or “sexism.” If, as a student on campus, I cross my eyes when I hear about female genital mutilation, I could be accused of Islamophobia and be disciplined accordingly.

The only way that we can reclaim our future is for adults to retake control of academic institutions. Professors need to be reined in. Consideration should be given to abolishing tenure. This is anathema to the trade union known as the American Association of University Professors, who couch arguments in favor of the tenure system in high flown language about academic freedom and the pursuit of academic excellence, but that is nonsense. They are a trade union every bit as much as the Teamsters or the Boilermakers, so what makes their propaganda any more worthy of unquestioned obedience?

University administrators who do not turn their institutions away from the direction in which they are traveling need to be replaced. Why do the authorities at UC Berkeley permit hooded thugs to remain as students? And if they are not students, why are they not prosecuted for trespass and locked up?

The greater culprits in this sordid tale of abdicated authority are university boards of trustees. They are even more culpable in this web of wholesale malfeasance than are faculty or administrators. Members of these boards who permit these attacks on civilization are in breach of their fiduciary duty to their institutions and to their students, as well as the parents and taxpayers who pay tuitions. They have a moral responsibility to the future of the United States and they are failing in their duties. It is time to call them to account.

Finally, it is those who are paying tuition who have the ultimate responsibility for defeating this plague that threatens us all. Are you, as a parent, reviewing the syllabi of courses that your children propose to take? Are you doing due diligence on the professors who will teach them? Are you looking into the sources and uses of the funds that support organizations such as Students for Justice in Palestine and other vile groups who are polluting the minds of your children?” Are you taking note of whether or not your child’s college or university accepts the shutting down of speakers on campus or tolerates the rioting of those who would prevent others from exercising their right to freely assemble and speak?

Are you, as parents, raising your voices to put pressure on administrators, boards of trustees and politicians to force them to reverse the virus that threatens to overwhelm us? Finally, are you looking for the names of major donors to these institutions, to expose and shame them for blindly permitting this travesty to continue? If not, then you too are a significant part of the problem and it is up to you to stand up and fight to begin the rollback of this epidemic.

The virus is spreading. It’s time to end this plague before it engulfs us.

(Originally published in the Charleston Mercury.)