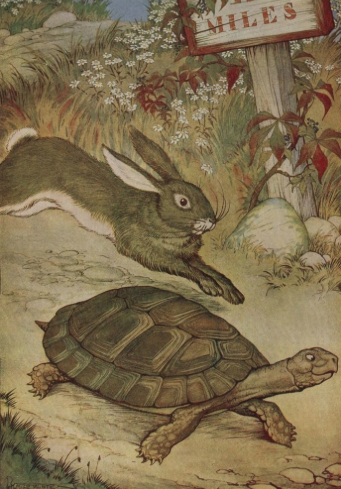 We all remember the fable of the Turtle and the Hare.  The rabbit was quick, braggadocios, and boisterous; the turtle was slow, steady, and quiet.  For a long time it appeared obvious that the rabbit would win the race; he even cheered for himself.  Meanwhile the turtle plodded along, one step at a time keeping his eye on the goal.  To no avail his distressed friends tried to hurry him up.   We know who came across the finish line first after all.

Neither the Budget nor the Health Care Bill is all that I wanted; I wanted Obamacare totally repealed, never to be again. Period.  I wanted Pres. Trump to go in there and “handle everything and everybody” and tell them how it is going to be.  But that is not what happened.   Even so, we made progress in both areas, and we will have another opportunity soon to review the Budget and Health Care.  It is wise take what we have, hold on to it and go for more.  That is precisely what the Democrats do and that is how they win.  The Democrats never toss away any victory merely because they did not get all that they wanted.  While they did finally force Obamacare on us, they worked on it for years; remember Hillary-Care never getting off the ground at all?  But the Democrats never gave up; they held on tenaciously and kept working on it— and on us.

We Conservatives are not known for our negotiating finesse.  We are highly principled; we know what we want, and we want all of it.   Often if we do not get the “whole enchilada” we think we have lost.  But that is not reasonable; it is not reality.  We are often too quick to throw down the gauntlet—at each other (very counter-productive); I know that can be true about me.   My Daddy strove to teach me a better way; he said to me countless times, “Honey, you catch more flies with honey than vinegar.  There is plenty of time later for other measures, if it is necessary.  Keep your eye on your goal, keep moving forward, and you will get there. The sun will come up tomorrow.” I never wanted to hear that, but he was right, and there are times when that is the precise M.O.  This is one of those times.

President Donald Trump is the master of deal making; his strength is arbitration.  He is a winner.  We elected him to get us up and out of this mess that we are in; draining the swamp will take more than 100 days.  We do ourselves and our cause great harm when we besmirch our President just because we did not get what we wanted the first time.  My goodness!  We can be a part of the problem or a part of the solution.  Let us choose to be a part of the solution by standing together with and behind our President.  Let’s Make America Great Again.

'Separation of Church and State": Separating Fact from Fiction