In recent weeks, matters have escalated rapidly in regards to North Korea. The reclusive hermit state has taken to posturing in the aftermath of a US cruise missile strike against Syria, conducting missile tests (the last of which was a spectacular failure) and issuing strong, blustering threats against the United States. Never one to show weakness, President Donald Trump has been standing up to them, most recently by deploying a US Navy carrier battle group the waters around North Korea as a show of force. Is response to that, dictator Kim Jong-un has begun speaking of a “super mighty preemptive strike” against US forces, and North Korean propaganda is featuring – though not unusually – heroic Korean forces bombing America and reducing the Stars and Stripes flag to a smoldering heap of fire.

For a lot of people, it’s easy to dismiss Kim Jong-un’s macho rhetoric and dubious weapons tests. The man is barely more than a boy, and he’s been trying to look strong – to the US, to the world, maybe even to himself – since he took office following his father’s death. Nothing has come of his hot bluster thus far, so maybe it’s reasonable to assume that nothing ever will.

The issue touches a lot closer to home, however, for those of us living on the west coast, such as myself in California. We’re forced to look at Kim Jong-un in a slightly different light. He rules in his country entirely by heredity – not because of any particular qualifications he ostensibly has for the job, and certainly not because anyone in North Korea voted him into office. He can do whatever he wants with no oversight whatsoever, and if he does feel the need to prove some kind of adolescent point about how much of a “man” he is, there isn’t anyone in his country who can stop him.

The reason we as Californians have to be so mindful of this is because North Korea is known to possess nuclear weapons, and if Kim Jong-un should look for an American target for those weapons, it would be impossible for California not to catch his eye. Not only is the state geographically close (relatively speaking) to Asia, it holds several large population centers in which a nuclear strike would be unimaginably devastating and strike fear into all Americans in way probably nothing ever has.

Our distant neighbors in Hawaii are also understandably very concerned. They have already asked the federal government for help setting up a nuclear preparedness plan (including restocking and refurbishing fallout shelters that haven’t been maintained since the Cold War). Hawaii, being closer, is certainly an easier target for North Korea than California. But we Californians can’t help but think that the US mainland is the ultimate prize.

So, exactly how worried should California be? For now – and I emphasize for now – we are in safe hands.  The White House has expressed hopes the Chinese will do more to influence Pyongyang through diplomacy and enhanced 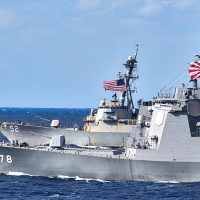 sanctions, but if that fails, and North Korea continues its development of nuclear weapons, there are other options on the table that would significantly alter U.S. policy. In the latest discussions it seems that overthrowing the regime of the dictator Kim Jong-un, freezing the nuclear program, at least in the short term, to have decided that a freeze of the program is enough, adding that begs the question: “Is that enough? Special covert action, by infiltrating U.S. and South Korean special forces into North Korea to incapacitate or take out key infrastructure — for instance. A “best strategy” should the U.S. be forced to take some kind of military action, such action as: some combination of Special Forces with South Korea and cyber.

Japan’s defense ministry dispatched Izumo, the nation’s biggest warship, a ship one of its largest, and the first to carry out peacetime protection tasks. Japan’s warship will guard and escort a U.S. supply vessel as it maneuvers through the country’s waters, flexing new powers for the first time broadened the scope of defense activities.

Since North Korea lacks both intercontinental ballistic missiles (ICBMs) capable of crossing the Pacific Ocean, and the ability to mount nuclear warheads on such missiles (and that second point is a challenge that shouldn’t be underestimated, as ICBMs undergo enormous stress during flight, and protecting warheads from such turbulence is no easy task).

The problem is that these shortcomings are merely technical, and given enough time, North Korea is virtually certain to overcome them. The solution also isn’t necessarily so simple as military action against the rogue nation, as anything that backs Kim Jong-un into a corner and makes him feel as if he has nothing left to lose might only make him more likely to strike. This is a situation that must be handled with great care – and like our neighbors in Hawaii have already figured out, preparing for the worst might not be such a bad idea.

Daniel Greenfield: The Redemption of Israel