I’ve said before that I believe our Founding Fathers were wise enough to arrange the Bill of Rights in order of priority. The rights of people accused of a crime (fifth amendment) are important, but before getting to that point, it’s even more important that the people at large are protected from trumped up charges brought about by unreasonable searches and seizures (forth amendment). We should be clear that the Constitution cannot give the federal government any authority without explicitly spelling it out, as the tenth amendment accomplishes, but the ninth amendment makes the even more critical declaration that the rights of the people needn’t be so clearly written in order to exist. And of course, our freedom to defend ourselves and our families through the right to keep and bear arms is precious indeed, outranked only by a single liberty.

That one liberty, which the founders felt more dear than any other, is the freedom of speech. Quite simply, this 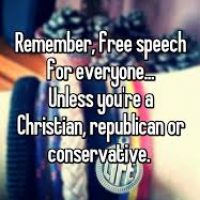 nation is founded on the idea that everyone has the right to speak his or her mind, and express their ideas for public consumption and consideration. It’s everyone’s place to respond to those ideas as they might see fit, but it’s no one’s place – not ever – to silence the ideas from being spoken at all.

And yet, we see this cherished principle of the American democracy repeatedly under assault in modern times. A prime example is the University of California at Berkeley, a traditionally left leaning school whose student body became enraged when conservative author and commentator Ann Coulter was invited to speak. In the first place, it’s worth wondering why some university students (it’s certainly not all of them) feel the need to do this – to become angry when someone with whom they disagree simply wishes to visit their school to say something. Is there some reason they must call for that person to be silenced, instead of organizing a forum to speak out in dissent of the offensive opinion? But I digress, because what happened at Berkeley wasn’t just that students got outraged about Ann Coulter’s visit. It’s that some of them got vicious, and when they did, the school administration decided to cave in to thugs and give them exactly what they wanted, and they canceled Ann’s scheduled speech.

In a similar vein are the recent attacks against the conservative Fox News, which has seen several of its top journalists and executives subjected to rancorous accusations that have already led to resignations. Roger Ailes and Bill O’Reilly have already left the network, and Sean Hannity is currently under fire.

All of these actions represent attempts to muzzle – rather than respond to – free speech. But then, there’s a conspicuous pattern in that muzzling, isn’t there? Because Ann Coulter, Roger Ailes, and the journalists and commentators at Fox News all have their conservative political ideologies in common. We certainly don’t see liberal, “progressive” viewpoints being squelched like this.  It’s ironic, really, that as leftists were the ones complaining loudest about the election of our current President, Donald Trump, warning that his coming to power heralded the end of America, it has been people of those very same leanings who have posed the greatest threat to American ideals concerning the freedom of expression and debate (they’ve also been the ones engaging in violence in support of their hatred of our President, despite deafening hysterics during the campaign that Trump’s supporters would surely riot if their candidate lost.

So if these people are really so worried about losing America to the policies of a man who at least loves it enough to give up a self-made life of luxury in order to take on the stressful, unpaid job (Mr. Trump has insisted he not collect a salary for serving as President) of being its leader, maybe they should look at themselves first. Because there’s nothing more American than free speech, and that’s exactly what you put under fire when you try to shut someone up instead of calling them out.