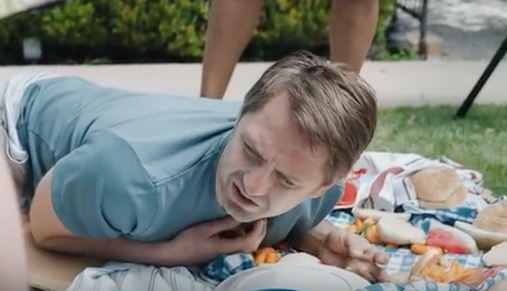 A man plunges into the ice. Another man ejects twenty feet into the air from an aquatic catapult. A woman surfs. “What muscle pain?” the drug manufacturer asks.

“The men are doing stupid stuff. The women aren’t,” observes the child.

This is the game we play at commercial time, it is called What Is and What Ought to Be. That is, what is to us and what ought to be according to those bent on a reconfigured social order.

Are Dads really as dumb as they are portrayed by United Healthcare? Do you think the commercial would work if roles were reversed and the man in the Pepsi commercial treated the woman that way? Who in their right mind would want a family like the one in the Roomba ad?

Play along if you will. See who can rack up the most points by spotting dumb the Dads or the condescending woman who exerts intellectual superiority over her male counterpart. Juxtapose your reality against what you see. Even a child can identify the patently false against her own reality.

The degradation of Dad is the precondition for which the new social order can progress.

Some theorize that social forces, activists in academia, industry and advertising namely, seek to subvert and silence our father’s voice from consciousness. It is theorized that once the voice of consciousness is silenced, it can be replaced with the appropriated social construct (i.e., Dads are dumb, marriage is for suckers, kids are smarter than parents).

Think of a young boy watching this Verizon commercial. Little does he realize how the message of ‘Dad is a dope’ undermines his own worth as a future father. The thought of marriage may become repellent.   He may even question his desire to be a Dad at all, an added bonus to those who seek the decline of birth rates of particular demographics.

Whether the goal is to portray men as impotent, unappealing to the opposite sex or evolutionarily inferior, we are being socially engineered to believe these things which we know are false.

Degrading Dad, the old-order figurehead of facts, universal absolutes and right and wrong, leads to the stripping away of conviction, making the masses further susceptible to covert social engineering.

Already full from a steady diet of patriarchal emasculation, students of higher education are primed for baccalaureate-level groupthink and the overt correction. Soon the free-thinking student is ostracized for having convictions and moral absolutes. Thinking outside the parameters of gender theory and economic class exploitation comes with consequence.

“Being socially ostracized by the group is one of man’s primal fears.”

The purpose of social engineering is reorder and insertion of the state.

The one who benefits from gender reconstruction is the same who benefits from war between the classes and war between the races. The social engineer’s desire is to deconstruct civilization as we know it and replace it with their own warped sense of liberation: a world without borders, sin or consciousness. Forget the notion that that voice was put there to protect us from ourselves to begin with.

Once you kill that voice of consciousness, the father’s voice, the seeds of consensus and relativism are sown.

Recognize it. Reverse it.

March for Science Rally Protester: Trump is "Rounding Up People" Like in Nazi Germany