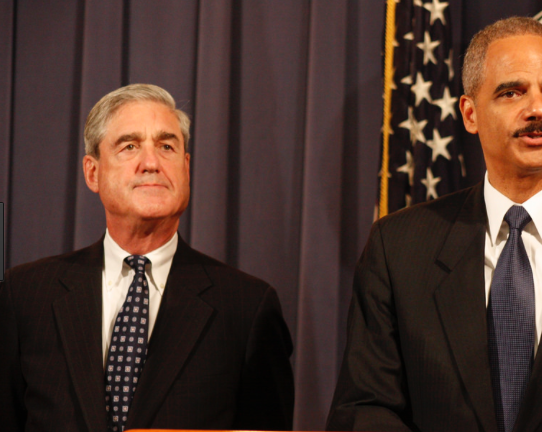 Washington, DC is a political petri dish, and few are immune from the infection it spawns. So, when you hear a political operative described as “nonpartisan” or of “the highest character,” you should secure your proverbial wallet.

For instance, the Russia “special counsel” Robert Mueller, the FBI director for more than a decade, is supposedly the best Washington has to offer. However, our Corruption Chronicles blog reminds us he deserves much closer scrutiny:

Now that Robert Mueller has been appointed special counsel to investigate if Russia influenced the 2016 presidential election it’s worth reiterating his misguided handiwork and collaboration with radical Islamist organizations as FBI director. Judicial Watch exclusively obtained droves of records back in 2013 documenting how, under Mueller’s leadership, the FBI purged all anti-terrorism training material deemed “offensive” to Muslims after secret meetings between Islamic organizations and the FBI chief. Judicial Watch had to sue to get the records and published an in-depth report on the scandal in 2013 and a lengthier, updated follow-up in 2015.

As FBI director, Mueller bent over backwards to please radical Islamist groups and caved into their demands. The agency eliminated the valuable anti-terrorism training material and curricula after Mueller met with various Islamist organizations, including those with documented ties too terrorism. Among them were two organizations— Islamic Society of North America (ISNA) and Council on American Islamic Relations (CAIR)—named by the U.S. government as unindicted co-conspirators in the 2007 Holy Land Foundation terrorist financing case. CAIR is a terrorist front group with extensive links to foreign and domestic Islamists. It was founded in 1994 by three Middle Eastern extremists (Omar Ahmad, Nihad Awad and Rafeeq Jaber) who ran the American propaganda wing of Hamas, known then as the Islamic Association for Palestine.

The records obtained as part of Judicial Watch’s lawsuit show that Mueller, who served 12 years as FBI chief, met with the Islamist organizations on February 8, 2012, to hear their demands. Shortly after the director assured the Muslim groups that he had ordered the removal of presentations and curricula on Islam from FBI offices nationwide. The purge was part of a broader Islamist operation designed to influence the opinions and actions of persons, institutions, governments and the public at-large. The records obtained by Judicial Watch also show similar incidents of Islamic influence operations at the Departments of Justice and State, the Joint Chiefs of Staff, and the Obama White House.

Here are some of the reasons provided by Mueller’s FBI for getting rid of “offensive” training documents: “Article is highly inflammatory and inaccurately argues the Muslim Brotherhood is a terrorist organization.” It’s crucial to note that Mueller himself had previously described the Muslim Brotherhood as a group that supports terrorism in the U.S. and overseas when his agency provided this ludicrous explanation. Here’s more training material that offended the terrorist groups, according to the FBI files provided to Judicial Watch: An article claiming Al Qaeda is “clearly linked” to the 1993 World Trade Center Bombing; The Qur’an is not the teachings of the Prophet, but the revealed word of God; Sweeping generality of ‘Those who fit the terrorist profile best (for the present at least) are young male immigrants of Middle Eastern appearance;’ conflating Islamic Militancy with terrorism. The list goes on and on.

Mueller’s actions have had a widespread effect because many local law enforcement agencies followed the FBI’s lead in allowing Islamic groups like CAIR to dictate what anti-terrorism material could be used to train officers. Among them are police departments in three Illinois cities— Lombard, Elmhurst and Highland Park—as well as the New York Police Department (NYPD). In the case of the Lombard Police Department, CAIR asserted that the instructor of a training course called “Islamic Awareness as a Counter-Terrorist Strategy” was anti-Muslim though there was no evidence to support it. Like the FBI, Lombard officials got rid of the “offensive” course. The NYPD purged a highly acclaimed report that’s proven to be a critical tool in terrorism investigations after three New York Muslims, two mosques and an Islamic nonprofit filed a lawsuit.

Considering Mueller’s role in much of this, it makes him a bizarre choice to lead the heated Russia investigation. The goal, apparently, is to determine if Russia interfered in the 2016 presidential election and if President Donald Trump’s campaign colluded with Russian officials. In the Justice Department announcement, Deputy Attorney General Rod J. Rosenstein describes Mueller as person who qualifies to lead the probe because he exercises a degree of independence from the normal chain of command. “Special Counsel Mueller will have all appropriate resources to conduct a thorough and complete investigation, and I am confident that he will follow the facts, apply the law and reach a just result,” according to Rosenstein.

The Secret History of ISIS: The Full Story Behind the Rise of the Islamic State