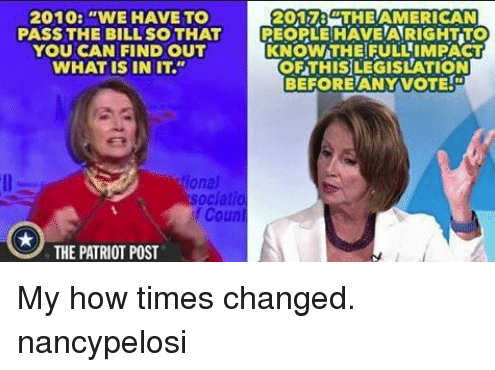 The U.S. House of Representatives will vote Thursday on a controversial Republican bill that would repeal and replace key parts of Obamacare, the GOP’s majority leader said Wednesday night.

Asked he if had the votes to win passage of the bill, McCarthy told NBC News, “Yes we do.”

“We will pass this bill,” McCarthy said. “I feel great about the [vote] count.”

House Speaker Paul Ryan, R-Wisc., said several days ago that he would not hold the vote without having those winning votes in hand.

House Democratic Leader Rep. Nancy Pelosi blasted the GOP for scheduling the vote. And she pointedly noted that the bill had not yet been analyzed by the Congressional Budget Office, which will ultimately estimate what the bill will cost, as well as how it will affect premiums and the number of people covered by insurance.

“Forcing a vote without a CBO score shows that Republicans are terrified of the public learning the full consequences of their plan to push Americans with pre-existing conditions into the cold,” Pelosi said. “But tomorrow, House Republicans are going to tattoo this moral monstrosity to their foreheads, and the American people will hold them accountable.”

The expected vote will come a day after two leading Republicans, Reps. Billy Long and Fred Upton, agreed to switch their expected “no” votes on the bill to “yes” votes.

Long and Upton earlier this week had come out publicly against the bill because of a change made to it last week that would, in their view and in those of many others’, weaken price protections for private individual plan insurance customers with pre-existing health conditions.

But on Wednesday, Long and Upton reversed their opinion after getting another amendment that would provide $8 billion in federal funding that would supposedly protect such customers from higher premiums.

Their reversal added momentum to the push for the vote. Another factor that may have played a role in the scheduling of the vote is a scheduled recess for the House at the end of this week, and the desire by GOP leaders that members not face lobbying against the bill from constituents at home.

Ryan and President Donald Trump were badly embarrassed in March when Ryan was forced to withdraw the bill from the House floor right before the first scheduled vote once it became clear it would fail.

On Wednesday evening, U.S. Secretary for Health and Human Services Tom Price wrote an op-ed for CNBC to make a plea for passage.

If the bill is passed Thursday, it would then go to the Senate, where it may face even more difficulty winning passage in its current form.

The bill would reform that way the federal government subsidizes purchases of individual health plans, and also how it funds Medicaid, the joint federal-state program that provides health coverage to primarily poor people. It would also eliminate Obamacare taxes, providing a windfall to wealthier Americans.

Republicans hold majorities in both the House and Senate. But they have struggled for nearly two months to get enough GOP House members to support the bill, which will be uniformly opposed by Democrats.

Democrats are adamantly against making the kind of big changes to the Affordable Care Act that they GOP bill aims to accomplish.

And some Republican members have opposed the bill because they believe it would lead to higher premiums for many people, particularly older Americans and those with pre-existing health conditions, and also will lead to increases in the number of people without insurance.

A bloc of conservative GOP members opposed the bill because it did not go far enough in repealing Obamacare.

The CBO, in analyzing an earlier version of the bill, projected that it would result in 24 million more Americans being uninsured by 2026 than would be the case if Obamacare remained in place as is. The CBO also estimated that premiums for individual health plans would spike by 15 to 20 percent higher in 2018 and 2019 than if Obamacare remained in effect in current form.

Sandra Solomon: What Islam Taught Me About the Hijab