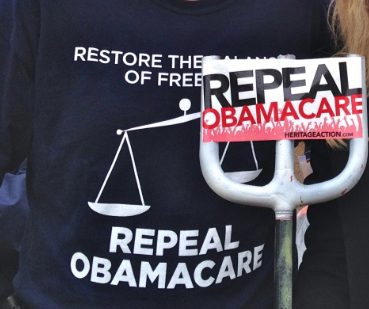 Is this the beginning of the end of Obamacare?

House Republicans on Thursday passed legislation aimed at repealing and replacing ObamaCare, taking a major step toward a long-held goal and setting in motion an overhaul of the nation’s health system.

The narrow 217-213 vote is a victory for GOP leaders, who faced a tumultuous path to getting the bill to the floor. The measure had to be pulled in March because of a lack of votes, but a series of deals since then brought on board the conservative Freedom Caucus and then wavering moderates.

“Today we made history by taking the first important step toward rescuing hardworking families from the failures and skyrocketing costs of Obamacare,” House Majority Whip Steve Scalise (R-La.) said in a statement.

Twenty Republicans voted against the bill, most of them centrists hailing from swing districts that Democrats are targeting in 2018.

After the vote, Republican lawmakers loaded into Capitol Police buses to drive to the White House for a celebration with Trump. As they got on board, a group of protestors gathered nearby, chanting “shame!” at them.

Trump, flanked by House Republicans, said from the White House Rose Garden he was “confident” the Senate would also vote to repeal ObamaCare.

“This has brought the Republican Party together.”

The bill, known as the American Health Care Act, repeals the core elements of ObamaCare, including its subsidies to help people get insurance coverage, expansion of Medicaid, taxes and mandates for people to get coverage.

In its place, the bill provides a new tax credit aimed at helping people buy insurance, though it would provide less help than ObamaCare to low-income people.

The Congressional Budget Office found that 24 million more people will become uninsured over the next decade because of the bill. While some of that loss is because of people choosing not to get coverage when the mandate is repealed, much of it would come from Medicaid cuts and the smaller tax credit as well.

Republicans brought the measure to a vote without an analysis from the Congressional Budget Office on the updated bill, meaning lawmakers did not have the full nonpartisan analysis of what the bill would do.

In addition, while Republicans have long argued that Democrats rammed through ObamaCare in 2010, the final changes to the Republican bill were only released the night before the vote.

Republicans’ main argument is that ObamaCare is failing and needs to be replaced. They point to insurers pulling out of certain markets, while Democrats counter that uncertainty from Republican efforts to weaken the law are to blame.

“It’s been a winding road to this point, but we’re here today to fulfill the promise that we made to the American people,” said Rep. Diane Black (R-Tenn.), who led GOP floor debate on the measure.

“Under ObamaCare, the situation is getting worse every day,” she said. “We can’t wait a moment longer than necessary to provide relief for the American people by repealing and replacing ObamaCare.”

Pointing to the hundreds of billions of dollars in tax cuts, she said the bill “will have the biggest transfer of wealth in the history of our country — Robin Hood in reverse.”

The measure has deep cuts to Medicaid, the government healthcare program for low income people, including putting a new cap on payments and ending ObamaCare’s expansion of the program after 2020.

The bill was a tough vote for some electorally vulnerable members of Congress. Many remained publicly undecided until the last moment as leaders furiously whipped lawmakers over the last several days.

Rep. Mike Coffman (R-Colo.), for example, came out as a “no” hours before the vote. He cited the lack of a CBO analysis as well as weakening protections for people with pre-existing conditions.

The key move to bring the Freedom Caucus on board was an amendment that allows states to apply for waivers to one of ObamaCare’s key protections for people with pre-existing conditions, known as community rating. If that were repealed in a state, insurers could go back to charging exorbitant premiums to people based on their health, which could put coverage out of reach for many.

Republicans counter by pointing to money for high risk pools. A last-minute addition of $8 billion more in funding for people with pre-existing conditions was key to winning over several wavering moderates, though many experts doubt whether that will be close to enough funding.

Daniel Greenfield: The Dirty Red Secrets of May