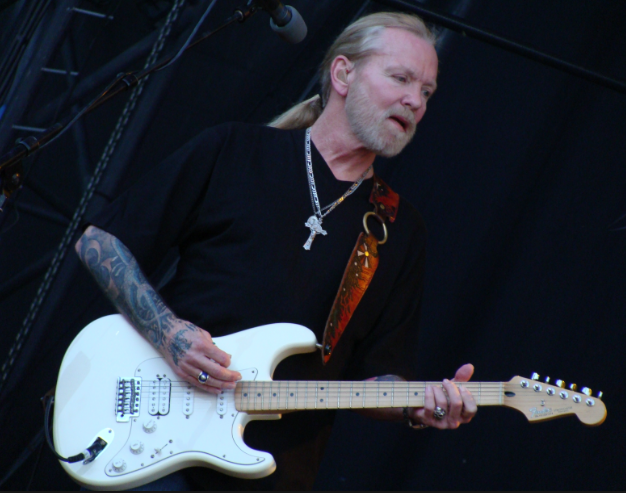 On May 27, 2017, singer, musician,and composer Gregg Allman passed away peacefully at his home in Savannah, Georgia. He had been ill for quite some time. In 1999 he was diagnosed with Hepatitis C and underwent a liver transplant in 2010 and spent time under the care of the Mayo Clinic. His passing was due to complications from liver cancer.

Gregg Allman’s life was marked by tragedy, loss, and addiction but more importantly, his life was blessed with transcendence beyond addiction and loss. He was clean and sober, beyond the occasional marijuana cigarette, since the mid-90’s. From his teens until his passing he was blessed with one of the greatest voices in Blues and Rock and was a vastly underrated organist and guitar player. 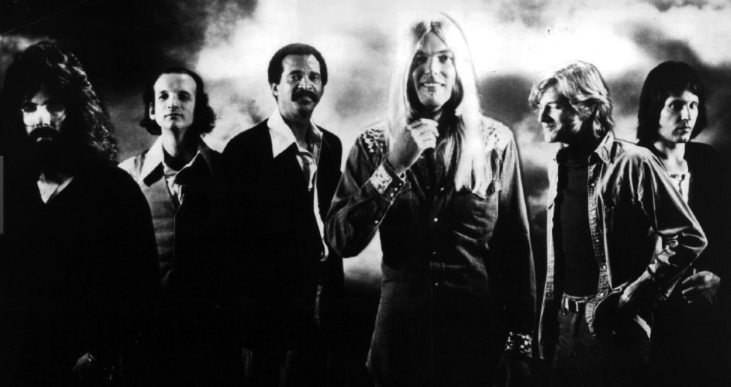 Gregg Allman’s solo work and his seminal work with the Allman Brothers is very important to me as a musician. Like the rings of a tree, the music of the original Allman Brothers informed my own music. Every time I play slide guitar, I play a Duane Allman lick within a few bars. The power and the ease of Gregg’s emotive singing was also a huge influence on the foundation of my own singing. Gregg’s singing was in the great tradition of such singers as Ray Charles, Bobby Bland and Little Milton.

Meeting and seeing the Allman Brothers in concert taught me a profound lesson about transcending pain and how to turn pain into beauty.

August 15, 1970, I was 13 years old. By that time, I had been playing guitar seriously for a little over a year. Some friends of mine and their older sisters and friends scooped me up and told me we were going down that Saturday afternoon to see the soundcheck of a relatively new band called The Allman Brothers.

We pulled up in my one of my friend’s cars to the back of theater. It was actually very quiet, almost eerily so. Peeking inside we saw the road crew running cables and doing tech work. As the day panned out I found these guys all had hearts of gold. Sitting on a Fender amp, almost at center stage, was Allman Brothers founder and guitarist, Duane Allman. He was putting a new set of strings on his Les Paul Gold Top guitar.

Mary, a sister of my friend, who worked at a local hospital, went over to speak to Duane. She knew I was a budding guitarist and as promised introduced me to Duane Allman. He is one of the most charismatic individuals that I have ever met. He was the type of individual who drew you to him by his mere presence. Duane was dressed in a blue tie-dyed t-shirt, jeans and black frye boots with a dog collar clipped around his right ankle. I learned later that Duane’s working nickname was “Skydog.”

Mary took me over to Duane, who was the only band member present at that time.

Mary said, “Duane, this is Michael Ingmire and Michael, this is Duane Allman. Michael is starting to learn guitar and I told him how you were the best.”

Duane replied, “Well, maybe the best at this moment.” Duane grinned a megawatt smile, hugged me with his left arm, while holding on to the guitar with his right and said, “Well stay close to me son, stay close.” That made me feel great. Duane was the second adult, after local musician and mentor John Moore, that spoke to me about the mysteries of music like I was an adult.

Duane then asked who I was listening to on guitar. I said shyly, “ Jimi Hendrix and Cream.” He stated that he loved Eric Clapton’s playing and had listened to him a lot.

On August 26, 1970, Duane met Eric Clapton in Miami. That meeting lead to Duane’s crucial participation in the “Layla and Other Assorted Love Songs” album.

Duane then did me a huge favor. He explained to me the basis of Clapton and Hendrix’s playing stemmed from the Blues. He recited a litany of names that I should listen to, names that now are part of my musical DNA: B.B King, Buddy Guy, Freddie King, Robert Johnson, Albert King, Michael Bloomfield, Muddy Waters, Howling Wolf, among others. He said there were only two types of music, “Music that is performed well and music that needs rehearsal. The Blues is the food for all American music.”

All the while he was talking to me, he was re-stringing his guitar. After a moment, he grinned at me and asked what my Mother did. I told him she was a nurse. “That’s good, and your dad?” I hesitated and stammered, that my father was murdered about five years ago.

He looked at me almost harshly and asked, “Murdered? In this town? Me too. My father was murdered just down the road from here.” (Duane and Gregg’s dad Willis was robbed and murdered near the Fort Story military base, near Virginia Beach in 1949. He was serving in the Army at the time of his murder and had served with honor in World War II).

By this time Duane had restrung his guitar. He then tuned it to a chord so that the guitar would sound an E chord without placing any fingers on the fretboard. He pulled a glass Coricidin cold medicine bottle out of his jeans pocket. The label had been washed off. He slipped it on the third finger of his fretting hand and proceeded to change my world. I had not really heard anyone play slide guitar to any real degree by this time nor had I seen anyone play it live. The heavens opened up and my path was laid before I even knew that my world had truly changed.

While he was showing me some amazing slide guitar work, the band had been drifting in. Some members had already gotten behind their instruments. Gregg Allman walked up to Duane and grinned, “ Corrupting tomorrow’s youth are we Duane?”

“Just talking to this nice young man and waiting for you guys to show up for the sound check.”

Watching the Allman Brothers play through songs to set the levels of the PA was a good object lesson on how a band should be run. No doubt about it, Duane was the boss. But Gregg Allman moved me like no other singer had at that point. His voice floated above the rest of the band. Watching the band in concert that night taught me a lesson in musical communication among musicians. Subtle signals to each other. A great deal of attention was placed on the dynamics of the music.

More importantly, I learned a real lesson in the communication of all aspects of the human soul. I heard the Blues and felt the Blues in a manner that was new to me. Gregg Allman’s voice and Duane Allman’s guitar work taught me that there is a constructive way to communicate extreme sadness and extreme joy. That music was a way for me to accept the sorrows of my own life and was a way to play my way out of them. 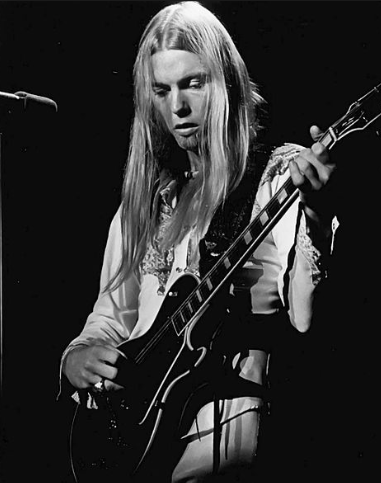 Though Duane was my biggest influence in the original Allman Brothers, I grew to appreciate Gregg more as I grew older and started to sing myself. Gregg Allman had a voice for the ages and as he grew older, (He was only 22 when I met him), his voice became a tapestry of pursuing music like a hard boiled religion. That music was a way out of the sorrows of addictions and divorce, of sickness and the trappings of this world. As I grew up and survived my own trials in this world, Gregg was a touchstone as a survivor.

The Allman Brothers band is mistakenly called a “Southern Rock” band. As I played and studied the history of music, I realized that the Allman Brothers were a true American improvisation band. They were a Blues-Jazz band in their first incarnation. At their best, their music always had a swing to it. Like a six piece big band. They were cliché-free in their approach and musicians and fans will study and enjoy their music in the centuries to come.

So thank you Gregg and thank you Duane, the time you spent with a shy and scared 13 year old kid in Norfolk, has panned out. As I pick up a guitar, I will always remember that day when the heavens opened up and a world beyond sorrow came into focus.