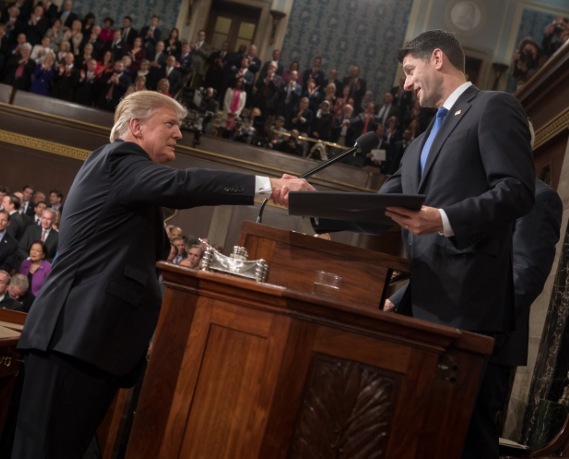 Daniel Horowitz has some very strong words to describe the new 2017 budget, in which the Republican party capitulated to basically everything Democrats wanted. In doing so, they threw out all of the “make America great” plans President Trump promised to enact. Yes, it’s very early in his presidency and he inherited 8 years of damage. But the reason so many were excited about a “non-politician” becoming president was largely based on the fact that Donald Trump would take on DC and the Beltway types and change “politics as usual”.  Now, the mere fact that Nancy Pelosi is boasting about “blocking 160 GOP priorities” in the bill should be cause enough to (finally) vote out all of the Democrat-leaning Republicans in the party as soon as humanly possible.

Indeed, the 1,665-page, $1.16 trillion omnibus is everything we would have gotten had Democrats been in charge. After they successfully got Republicans to jettison all of Trump’s priorities, Democrats secured the Puerto Rico bailout. And while the bill does not contain an Obamacare bailout (cost-sharing subsidies), the White House agreed to continue illegally promulgating the insurer bailout without congressional appropriations as part of the condition for Democrats affording Republicans the honor of capitulating to them.

The only plus side of this bill is that the president did secure a $15 billion boost for the military, but Democrats always agree to spending more on the military, as it has become a consensus, albeit without offsetting the cost with cuts to non-defense spending. That is exactly the deal they secured. They increased spending in many of the areas where Trump proposed cuts.

Meanwhile, Nancy Pelosi is bragging about blocking 160 GOP priorities in the bill!

Some defenders of this deal will claim that we should wait for “the next time.” The president is coming out with the FY 2018 budget this week, and they will fight for it in September. But that budget is a complete joke. If they can’t fight for modest cuts and their basic campaign promises with control of all of government – with the momentum of the first 100 days – they certainly won’t fight later in the year for real spending cuts. Instead, the fear of a shutdown led them to increase spending. That will not change in September.

I would have more sympathy for the president had he not spent the past month attacking conservatives on health care. He should have, instead, been shaming McConnell and the appropriators into funding his priorities the same way he shamed the Freedom Caucus to accept 20 percent repeal of Obamacare. The way for him to distinguish himself from congressional Republicans is to immediately issue a veto threat.

Meanwhile, MoveOn.org is celebrating, taking credit for their “win”:

Donald Trump just “got rolled” in the budget fight.

This is a big win. And it happened—in large part—because MoveOn’s been playing offense, doing much more than simply fending off some of the worst of Trump’s toxic promises. MoveOn’s people-powered resistance is changing the game.

That’s why two words come to mind when I think of MoveOn: More, please.

MoveOn’s team continues to stretch to meet this critical moment—hiring more staff, building new tools, producing more videos, and supporting a record number of breakthrough events and actions. Dogged, tireless, game-changing work at this scale is expensive, but it’s also what works. So the big question right now is: Do you and I have what it takes to make sure MoveOn keeps fighting?

Here’s why we’re celebrating: Even with Republicans in control of the House and Senate, Trump got zip for his blasted wall, no money for a deportation force, and no cuts to sanctuary cities funding or Planned Parenthood.

Instead of losing one-third of its funding as Trump promised, the EPA will have to absorb only a 1% snip.

And far from being gutted, the National Institutes of Health got a $2 billion increase to fight cancer, Alzheimer’s, and more.

This didn’t happen because of some budget math magic. It happened because for the past few months, groups like MoveOn pushed Democrats to fight like hell. And at the same time, MoveOn members unleashed a relentless fury on congressional Republicans—with outraged constituents confronting their members of Congress at home and flooding their offices in Washington, D.C., with phone calls—showing them the consequences they’ll face if they side with a tanking Trump. It’s been a coordinated and effective one-two punch.

But the budget win isn’t the only reason I’m doing a 100-day cheer for MoveOn members and partner organizations. You helped block the Muslim Ban and save the Affordable Care Act (once again). And you’re an absolutely critical driving force nationally in terms of investigating Trump and his corrupt administration—racking up multiple wins taking on Devin Nunes, Jeff Sessions, and Steve Bannon—while continually keeping the spotlight on Trump’s financial and foreign entanglements (which could very well be his Achilles’ heel).

Ironic Moment of the Century: Pelosi on Healthcare Bill Says We Haven't Had Time to Read the Bill Yet