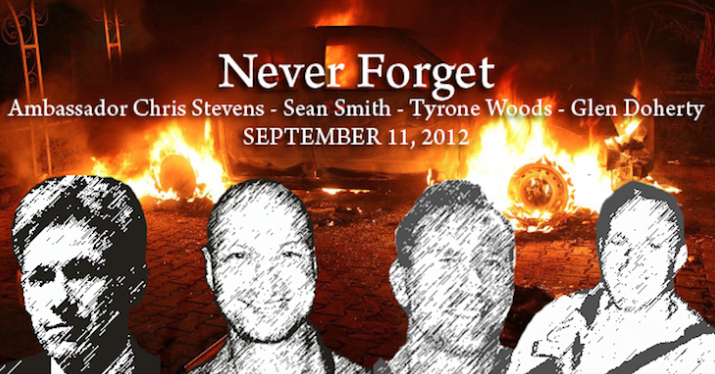 From Tom Fitton and the excellent folks at Judicial Watch:

I have some good news on bad news on getting more answers on the Benghazi outrage.

First the good news. We put out word this morning that on March 20, 2017, U.S. District Judge Amy Berman Jackson ordered the U.S. Department of State to turn over to Judicial Watch “eight identical paragraphs” of previously redacted material in two September 13, 2012, Hillary Clinton emails. The emails regarded phone calls made by President Barack Obama to Egyptian and Libyan leaders immediately following the terrorist attack on the U.S. mission in Benghazi. Both emails had the subject line “Quick Summary of POTUS Calls to Presidents of Libya and Egypt” and were among the emails stored on Clinton’s unofficial email server. Judge Jackson reviewed the documents directly and rejected the government’s contention that the records had been properly withheld under the FOIA B(5) “deliberative process” exemption.

Judge Jackson ruled: “the two records, even if just barely predecisional, are not deliberative. [The State Department] has pointed to very little to support its characterization of these two records as deliberative, and the Court’s in camera review of the documents reveals that they do not fall within that category.”

The full emails may reveal what former Secretary of State Hillary Clinton and President Obama knew about the September 11, 2012, terror attack on the U.S. mission in Benghazi.

Immediately following Judge Jackson’s March 20 ruling, the State Department asked the court to reconsider. The State Department argued that, due to an internal “mistake,” it failed to claim that the emails were classified and, therefore, exempt from production under FOIA Exemption B(1).

You won’t be surprised to learn our attorney team went back to court to oppose this gambit. Our brief argues that the failure was not a mistake, but instead was part of a deliberate effort by the State Department to protect Clinton and the agency by avoiding identifying emails on Clinton’s unofficial, non-secure email server as classified.

Our filing cites an interview of an FBI employee who told federal investigators that top State Department official Patrick Kennedy pressured the FBI to keep Clinton’s emails unclassified. The employee told the FBI he “believes STATE ha[d] an agenda which involves minimizing the classified nature of the CLINTON emails in order to protect STATE interests and those of CLINTON.”

We also cite to an interview of a State Department employee who told the FBI that the State Department’s Office of Legal Counsel interfered with the FOIA processing of email from Secretary Clinton’s server, instructing reviewers to use Exemption B(5) (deliberative process exemption) instead of Exemption B(1) (classified information exemption). According to the FBI interview:
STATE’s Near East Affairs Bureau upgraded several of CLINTON’s emails to a classified level with a B(1) release exemption. [Redacted], along with [Redacted] attorney, Office of Legal Counsel, called STATE’s Near East Affairs Bureau and told them they could use a B(5) exemption on a upgraded email to protect it instead of the B(1) exemption. However, the use of the B(5) exemption, which is usually used for executive privilege-related information, was incorrect as the information actually was classified and related to national security, which would be a B(1) exemption.

An agency’s deliberate withholding of a FOIA claim, either to gain a tactical advantage or, as appears to be the case here, to protect the agency’s interests and those of its former head, is “a motive undoubtedly inconsistent with FOIA’s broad remedial purpose …” It “counsels denying the Government’s request.”
The emails in question were sent to then-top administration officials, including Clinton, Deputy Secretary of State William Burns, Under Secretary of State Wendy Sherman, Clinton Deputy Chief of Staff Jacob Sullivan, Special Assistant Robert Russo, and Deputy National Security Advisor Denis McDonough.

I’m sure you share my concern that this potentially historic Benghazi material may never see the light of day thanks to some within the Trump administration. Does President Trump know his State and Justice Departments are still trying to provide cover for Hillary Clinton and Barack Obama?”

We fought the Obama administration in court repeatedly to uncover the truth about Benghazi that even Congress couldn’t get. Let’s hope the Trump administration appointees understand the stakes and stop fighting us in court (and wasting taxpayer dollars) to defend the indefensible.