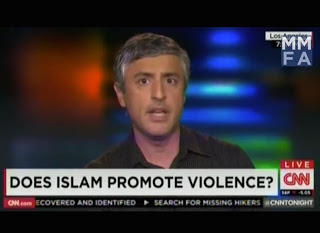 Reza Aslan has built a career complaining about Islamophobia. Throw a dart at a map of colleges and the odds were good that Aslan would be speaking at one of them about the rising threat of Islamophobia.

Earlier this year, Aslan, an Iranian Muslim, announced that he was going to change people’s minds about Islam and make them more tolerant, “through pop culture, through film and television.“

CNN gave Aslan a forum. Nearly every episode of “The Believer” that aired has made some religion that isn’t Islam look freaky, unpleasant and threatening. Instead of breaking through the walls, it has surveyed different non-Islamic religions only to sneer at them as strange and weird.

Instead of Islamophobia, it offers Non-Islam-ophobia.

“The Believer” kicked off with an episode featuring a sect of cannibals whom the show associated with Hinduism. Its last episode spread fear over the threat posed by Orthodox Jews. CNN’s “Believer” clips offer Reza Aslan explaining why he’s a Muslim sandwiched between a doomsday cult leader who calls himself “Jezus”, voodoo, scientology and a Mexican death cult.

Not even Al Jazeera would have been this blatant about its Islamic agenda.

Reza Aslan, CNN and “Believer” have already offended a whole range of religious groups. Hindus angrily denounced the misrepresentation of their religion. But the left has much less interest in Hinduphobia than it does in Islamophobia. Hindu protests outside CNN offices in five cities garnered almost no coverage from the same media that covers every single Islamic protest against Islamophobia.

The media doesn’t believe that all forms of religious bigotry are created equal.

Orthodox Jews condemned Aslan for his fearmongering aimed at Judaism. But the left is uninterested in criticizing anti-Semitism from Islamists. Especially those on its payroll.

“The Believer” has tried to smear Christians, Hindus and Jews. It has yet to profile Muslims. Despite Aslan’s interest in teaching Americans not to be Islamophobes, he seems to prefer pushing Christophobia, Judeophobia and Hinduphobia. But bigots can’t be expected to fight bigotry.

“The Believer” treats non-Islamic religions as a freakshow. The gimmick attracts viewers. See Reza Aslan eat brains, talk to a doomsday cult leader or act afraid of Jews in fedoras. Look at all those freaks!

But don’t expect to see Shiite Muslims cutting their children in the street for Ashura on “The Believer”.

Beneath the hipster approach to religion is malice. Hindus are associated with cannibalism. Orthodox Jews in Israel are swapped in for Islamists. Reza Aslan pretends that Israeli cities are no-go zones as he insists, “If we get out of the car in these neighborhoods, we will be immediately attacked.”

Of course no one attacks him. But Reza Aslan gets to pretend to be afraid of the Jews.

In a CNN article, Aslan warned that Orthodox Jews are “taking on greater political power until, one day, you wake up and find this group has more or less taken over the state.”

If someone were to say such a thing about Muslims, Aslan would be leading a lecture tour to denounce Islamophobia. Last year, Aslan was peddling “Fear Inc.: The Industrializing of Islamophobia.” Now Reza Aslan is, coincidentally, spreading fear of a religion that Muslims view as their leading enemy.

And CNN is serving as Fear Inc. and industrializing Aslan’s Non-Islam-ophobia.

Israel, Reza Aslan warns, is on the verge of turning into a “Jewish version of Iran”.

That’s certainly a convenient message to peddle if you’re an Islamist opponent of Israel. In the past, Reza Aslan has been utterly unsubtle in his hatred of the Jewish State. Highlights included comparing Israelis to Nazis and insisting that Iran wants nukes because it feels threatened by Israel.

But, as critics know, Reza Aslan has two faces. One is a ranting bigot. The other feigns spirituality. The real Aslan is a bigot. The fake Aslan mouths inanities about the universality of religion even as he attacks every religion that isn’t Islam. You can find the real Aslan on social media and the fake Aslan on CNN.

“The Believer” is the perfect platform for Reza Aslan. Its smirking subtitle “Spiritually curious” and Aslan’s inanities convey the image of a hipster looking for religious meaning everywhere. It’s no doubt how the show was sold to CNN. And CNN execs saw Aslan’s approach of showcasing religious freakiness while disguising it with nostrums about the universality of the search for meaning as a safe bet.

But Aslan isn’t spiritually curious. He’s spiritually hostile. He’s learned to disguise that hostility by sounding like a liberal. On CNN, his attacks on various religions are interspersed with disclaimers. But the disclaimers, like the inanities, are meant to get lost in the overall impression that Hindus eat brains and Jews are Islamic terrorists who want to take over everything. That is what viewers will remember.

Reza Aslan postures as a scholar, but he’s callously ignorant of other religions and he isn’t actually interested in learning about them except to undermine them. His curiosity is only a media pose.

“The Believer” continues the trend that defined Aslan’s career. He writes a book defending Islam and then another that attacks Christianity. Then he responds to the criticism by crying Islamophobia.

The only one who should be allowed to stir up fear and loathing of other religions is Reza Aslan.

Christians, Hindus and Jews have taken apart Reza Aslan’s claims about their religions. But despite Aslan’s posturing, he isn’t a scholar. A scholar wouldn’t be boasting about eating brains or pretending to be afraid of Jews in Israel. “The Believer” isn’t a scholar’s work. It’s a malignant attack on non-Islamic religions disguised in one part universalism and four parts sensationalism.

Reza Aslan’s openness is a sham. As is his enthusiasm. He isn’t a scholar of religion but a promoter of Islam. He appears to embrace other religions, boasting, “I feel Jewish” during one episode and writing a book about Jesus, only to undermine them. He thrives by pitting members of enemy religions against each other whether it’s liberal and conservative Christians or secular and religious Jews.

Nothing better could or should be expected from Reza Aslan. “The Believer” is xenophobia masquerading as tolerance and sectarianism dressed up as universalism. Aslan’s episode on Jews in Israel is exactly what you ought to expect from a slick Hamas apologist. Hindus are likewise in the way of Islamic expansionism. As are Christians. Depicting non-Muslims as bizarre normalizes Islamic violence.

Something more ought to be expected from CNN.

The media has long thrived on mocking conservative Christians. It’s fairly casual about taking swipes at Orthodox Jews. But “The Believer” expanded its hit list to Hindus. How many others will there be?

Islam is involved in conflicts with every major religion on earth. How many religions is CNN ready to allow Aslan to smear? How long before “The Believer” heads to Myanmar to settle scores with the Buddhist monks who are defending themselves against Muslim violence? Or to Sudan to go after the Animists facing Muslim persecution? Islamists have no shortage of enemies. Neither will CNN.

CNN won’t report the truth about Islamic terror. Yet it is ready to offend every non-Muslim religion on earth.

Meet Our Next Ben Shapiro at Pro-Trump Rally in NYC: "Political correctness needs to be ground into a fine powder."