Imagine if every year on the 7th of May, Germans held an annual commemoration of the defeat of the Nazi state, complete with Swastikas, anti-Jewish chants and slogans, and a historical narrative claiming that the Volksdeutsche expelled from Poland, Czechoslovakia and Hungary were the real victims of WW2. That disgusting spectacle is what takes place on May 15th as Muslims in Israel chant and riot to protest their unsuccessful genocide of the minority indigenous Jewish population. 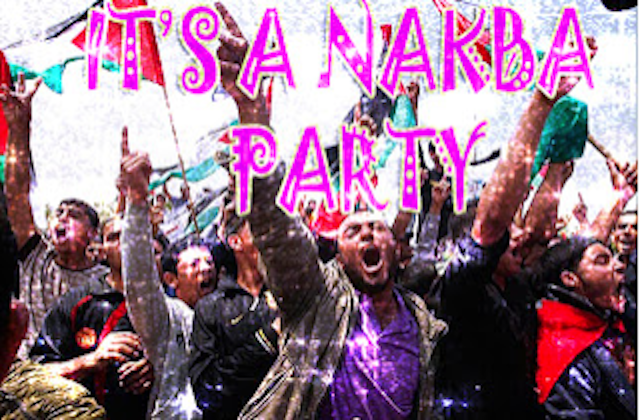 It’s hard to think of a more repulsive spectacle of historical obliviousness, than a regional majority responsible for multiple genocides dressing up as the victims because their invasion of Israel ended in a stalemate, rather than a genocidal purge of its residents.

The revisionist Muslim history of Israel ethnically cleanses the thousands of years of history of the original Jewish inhabitants and a thousand years of persecution under Muslim rule.

It leaves out the massacres and atrocities carried out by the Muslim invaders against the Jewish inhabitants in the 20th century, including the Hebron Massacre, and the Nazi collaboration of their leader, the Mufti of Jerusalem. Instead it begins and ends with Deir Yassin and angry old women holding up oversized housekeys and reminiscing about the good times they had massacring Jews.

The Nakbaites were supposed to be the beneficiaries of a genocide to be carried out by the armies of seven Muslim nations. Instead they had to settle down in Syria, Jordan and elsewhere around the region. An easy thing to do since they are the same people, speak the same language and share the same culture. The difference between a Jordanian Arab and a Jordanian Palestinian is a few miles and about twenty-five years.

Many of the “Palestinians” had migrated to Israel less than a century ago to take advantage of the economic boom created by Jewish and British investment after the fall of Ottoman colonial rule. Since then they migrated on to other booms in Saudi Arabia and Kuwait. Where they quickly made a nuisance of themselves and were at times expelled. Do the Kuwaiti Palestinians (or Kuwaitistinians) hold an annual Nakba to commemorate the 400,000 expelled from Kuwait by the Iraqis and then the Kuwaitis? Instead they humbly apologized to Kuwait for supporting Saddam Hussein. The way that they ought to apologize to Israel for supporting the attempted Muslim genocide of the Jews.

And, indeed, Israel, like Kuwait, should refuse to maintain any relations with the PLO until such an apology is forthcoming.

The Nakba commemorations are only possible in a culture with no sense of responsibility. A religion which has killed more people and wiped out more cultures than Stalin and Hitler combined, still remains convinced that it is the victim. A victim of their own failed genocidal war. The Nakba is really the Nakbacide. A dream of mass murder that was frustrated when their victims fought back

Had the Israeli War of Independence been fought between local Jews and Muslims, the Nakba circus might not be as bankrupt as it is. But it was actually a war fought between local Jews and the armies of seven Muslim nations, including Saudi Arabia, Egypt, Iraq and Syria, overseen by two British commanders. Despite all this, the Arab Muslim invaders still failed to do more than seize half of Jerusalem, and Gaza, Judea and Samaria. And that’s what really gnaws at them.

The ugly truth of the Nakba is that it blunted the nationalistic ambitions of Arab Muslims who, like ISIS, dreamed of replacing the Ottoman Empire with an Islamic State. Losing a war to a European world power wouldn’t have hurt as much as losing a war to a despised regional minority. A people whose name is an insult in the mouth of every Muslim.

Yahood. Lower than a dog. Yahood. Transformed into apes and pigs in the Koran. Yahood. Second class citizens in every Muslim country. Who somehow beat back seven Muslim armies and took back their lands that had been conquered by the Caliphs. 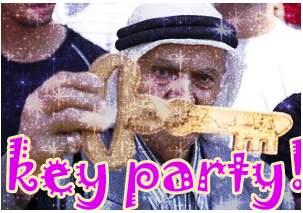 But in Muslim culture time never passes. The words, “You Lost a War, Get Over It”, have no meaning. Arab Muslims still think Spain is theirs. Every time they see a European army, they mutter about the Crusades. Jews are greeted with chants of “Khaybar ya Yahood” recalling Mohammed’s massacre of the Jews, a historical event that is much closer to what the Nakba only claims to be.

The Muslim world has no history. It has pervasive myths that feed the Muslim need for self-glorification and victimization. Muslim history is one long cry of “Mine, Mine, Mine” and “Give it Back”. Millions of Arab Muslims believe that they discovered America, that European science was stolen from them, that the entire world used to be Muslim, that the Holocaust was made up, that Neil Armstrong heard the Islamic call to prayer on the moon, that Jacques Cousteau converted to Islam and that the Koran invented light bulbs. The Nakba makes as much sense as any of these.

When Muslims win a war, it’s because Allah is on their side. When they lose a war, it’s because they were undermined, cheated and betrayed. The other side didn’t play fair. And then come the cries of, “Time Out”, “We Want a Do Over” and of course, “Mine, Mine, Mine! Give it Back!” Followed by oaths of vengeance, ululating cries of old women who just got done drowning their own daughters, Hashish crazed mobs torching flags that they bought for just that purpose and old men gritting their teeth at the camera.

What a glorious Nakba it was, same time again next year?

Their fictional Palestinian identity, with its imagined roots in a country they hardly ever lived in, has turned millions of people into the militias of Israel’s neighboring enemies. Their flags and chants about statehood hiding the fact that they are nothing more than proxies of countries which deny them citizenship because it makes them into better weapons, not just against Israel, but against each other.
When an Arab Muslim country wants some thugs to smash in the heads of protesters, some cheap labor or even cheaper reason to get their people all worked up, they bring in the faux Palestinians, with their keffiyahs, their Arab-Socialist tricolor flags and their chronic unemployment.

The historical irony, is that it is the very gullibility of these Arab-Muslims, their willingness to accept a Palestinian identity, that keeps them displaced in the countries they live in. Had they demanded the right to be citizens of Jordan, Syria or Lebanon– international pressure would have given them a new life.

Instead by embracing the dubious honor of continuing the Jihad against the Jews, they trapped themselves in a no man’s land of their own making. As long as they remain willing to be killers, sacrificing their own children to the fiery moloch of the bomb vest, then they will be forever pariahs in their own countries.

The “Palestinians” are their own curse. They are suffering the self-inflicted punishment for their own crimes. It is their hatred for the Jews that torments them and humiliates them. They eagerly die for their own sins. Their misery is the living embodiment of their own evil. They suffer because they cannot let go of their bigotry and their greed. And their illusory honor. 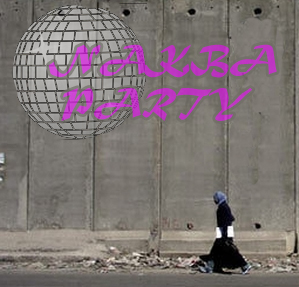 The Nakba is a tiresome reminder that Muslims don’t want peace. That they’re not mature enough to handle it. What they really want is to rehash grievances and sullenly plot another genocide, instead of coming to terms with the consequences of their own actions. The actual history in which Neil Armstrong didn’t hear any Arabic on the moon and the Koran didn’t invent the lightbulb, is also the one in which the Israelis have made concession after concession back to the mandate days, and the Arab-Muslims have responded with obstinate treachery and violence at every turn.

There is an anecdote about an Israeli driver who accidentally hits a sheep belonging to an Muslim. The driver gets out and offers to pay for the sheep. The Muslim refuses. The driver offers to pay for five sheep, for ten sheep. The Muslim still refuses. “What do you want?” the frustrated driver asks. “I want that sheep,” the Muslim says, pointing to the dead sheep. That is the Nakba in a nutshell. The Muslims don’t want to negotiate an agreement like adults. They want the dead sheep that represents their dreams of a united Arab Muslim empire ruling over the region. And the wars will go on until they finally learn that they can’t have it back.

Burning a Flag – Act of Policy Protest or Sedition?