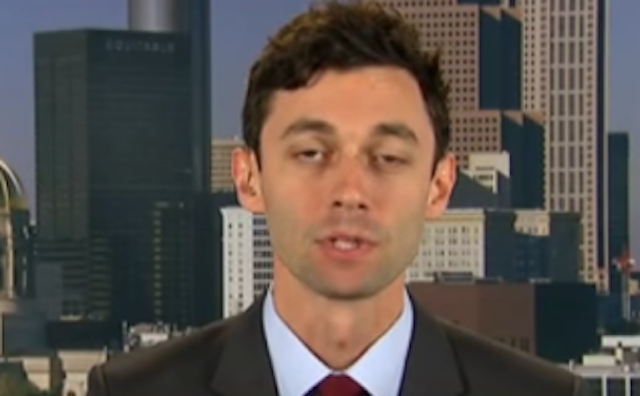 The Democrats are in trouble. And the list of party saviors is as broad as it is laughable. There’s Bernie Sanders, who denies that he’s a Democrat, Elizabeth Warren, who might not even survive reelection in her own state, Keith Ellison, an Islamist who keeps lying about his past with Farrakhan, Howard Dean, currently denying the existence of the First Amendment, and Maxine Waters.

You know you’re in trouble when your party is being represented on cable news by Maxine Waters. Desperate lefties had tried to tout the 78-year-old Waters as a hero to millennials. Maxine tried to help out by claiming, “I was a millennial once”.

When trying to appeal to millennials, it’s a good idea to use speakers who know what millennials are.

Jon Ossoff, the latest Dem savior, has one thing and only one thing going for him. He is a millennial. Ossoff didn’t vote in the 2012 presidential election. He can’t vote for himself in his current battle to take Georgia’s sixth district for the Dems because he doesn’t live in the district he’s running to represent.

In his defense, Ossoff has argued that no one should have expected him to live in the district because, “No one knew there was going to be an election coming”.

And why would he bother living in the district unless an election was coming? Or even once the election was underway. At least Facebook billionaire Chris Hughes actually bought his boyfriend Sean Eldridge a $2 mil home in the district he was trying to represent. Even if he didn’t bother living there. Couldn’t Ossoff have at least paid lip service to the locals by picking up a nice mansion to pretend to live in?

His $500K in Apple stock, $250K in Home Depot stock or $100K in Apple and GE stock should have been enough to cover a nice fixer-upper in some of the sixth district’s poorer areas.

However it should be noted that unlike Maxine Waters, who was born almost half a century before the existence of millennials, Jon Ossoff really is a millennial. As Mother Jones boasts, “Jon Ossoff’s Race Is the First Real Battle Between Millennials and Trump”. (Trump actually won white millennials 48 to 43.)

Ossoff is also the public face of the new DNC plan which involves DNC boss Tom Perez yelling obscenities into a microphone to prove just how “woke” he is and a 50 state strategy consisting of narrowly failing to win special elections in Republican districts.

The new DNC is Obama’s creature. Its boss is an Obama lackey and Ossoff is the perfect Obama Dem. He’s a graduate of the London School of Economics; the local equivalent of the Patrice Lumumba University in Moscow. He followed that up by plowing his dead grandfather’s money into a documentary company whose biggest clients included Al Jazeera.

When most people think of a small business owner they don’t think of a rich kid playing around with documentaries for a terrorist network. But it doesn’t get more Obama than that.

And Ossoff is the model for what an Obama Dem should be. As a New Yorker hagiography put it, he has “Kennedy-ish features and a deliberate, Obama-like manner of speaking.”

Kennedy-ish features certainly cover a lot of territory. Ossoff reputedly boasts a nose, eyes and teeth. Just like a Kennedy. But nothing excites Dems like the latest incarnation of JFK. Especially now that its former incarnation, Bill Clinton, is looking more and more like Ted Kennedy every day.

Ossoff’s experience in politics comes from handling foreign policy for Hank Johnson; a member of Congress who makes Maxine Waters seem statesmanlike. If millennials know Hank Johnson, it’s because he went viral for asking whether Guam might tip over if there were too many people living there.

Jon Ossoff’s position on Guam tipping over is unknown.

Also there was the time that Hank Johnson compared Jews to termites. “You see one home after another being appropriated by Jewish people,” he grumbled at a BDS event. “Almost like termites can get into a residence and eat before you know that you’ve been eaten up.”

Jon Ossoff isn’t a big fan of Jewish termites either. Instead he backs J Street which has spent years seeking a two state solution to the Jewish termite problem. J Street’s PAC has kicked in $56K to Ossoff.

That’s pennies considering Ossoff’s $8 million war chest. But it won’t surprise you too much that 95% of his donors are from out of state. 75% of them probably couldn’t find Georgia on a map.

It’s unknown whether Jon Ossoff can find the district that he doesn’t live in on a map.

Ossoff boasts an impressive Hank resume. By 19, he claimed to have been the Deputy Communications Director for Hank Johnson where he served as “Speechwriter, press officer, strategist for successful 2006 effort to unseat a 12-year Congressional incumbent.”

That’s not bad for a kid who couldn’t legally buy a drink in a bar.

By 20, he was the Legislative Correspondent & Systems Administrator for Johnson. By 23, he was Johnson’s campaign manager. Not to mention his Senior Legislative Assistant.

That’s very impressive. Or maybe not.

Ossoff’s parents are regular Dem donors. In 2006, the year that Ossoff’s LinkedIn resume claims he became the Deputy Communications Director for Hank Johnson, his father wrote a nice check to his boss. His parents, Richard Ossoff and Heather Fenton, went on writing those nice checks.

Hank Johnson raises a lot of money even though he doesn’t face competitive elections. He ran unopposed in 2014. He routinely wins elections by 75%. And yet he raised $638,258 for that race in which he ran unopposed.

At the end of 2016, Ossoff’s parents suddenly began writing some big checks to the DNC for a total of around $50,000. And the DNC became very enthusiastic about Jon Ossoff. It anointed him as the candidate.

This is the new Democrat Party.

A ton of money didn’t buy Ossoff the election. And that was the plan. Bet a ton of cash on a Dem in a low turnout special election while the Republicans squabble among themselves. No other Dem managed to score above 0.3%. But the Republicans still scored a majority of the vote. And so now there’s a runoff.

And that giant pile of cash might buy Ossoff as much as it did Sean Eldridge.

Dems are celebrating a near victory in a special election with a 192,000 voter turnout. The previous year’s election had a 326,000 turnout. The Ossoff miracle that the media is buzzing about is that he won 92,000 votes. The last Democrat to run for that seat won almost 125,000 votes.

Sneaking in to win a special election outright with a giant wad of outside cash was Ossoff’s best bet. It was a good bet on a bad candidate. Now the new DNC’s media allies will go back to talking up how much less of a margin they lost by this time around. Like that other special election they lost in Kansas 53 to 46. And preemptively blaming racist Republican vote suppression for Ossoff’s defeat.

Think of all the black people eager to vote for a rich white leftist hipster with “Kennedy-ish features” who didn’t get their chance.

All three of them.

But the DNC is more committed to fundraising and leftist politics than it is to winning. That’s why Jon Ossoff is where he is. It would have been smarter to run a more conservative candidate in the district. But the DNC is now an Obama joint dedicated to the proposition of running unapologetic leftists who can be confused with JFK by a blind drunk in a dark room. If Ossoff does nothing else, he pushes the party further to the left and blocks any move to recruit conservative Dem candidates.

Ossoff’s slogan was “Make Trump Furious”. But the real slogan is, “Keep the Dems Left”.