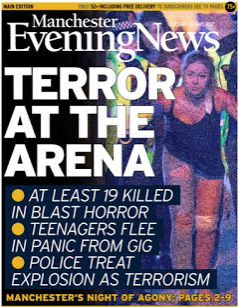 In the months before weeping little girls with nails in their faces were carried out of the Manchester Arena, the authorities of that city were hard at work fighting the dreaded threat of Islamophobia.

While Salman Abedi, the second-generation Muslim refugee terrorist who maimed and killed dozens in a brutal terrorist attack, stalked the streets wailing, “There is no god but Allah and Mohammed is the messenger of Allah”, Manchester police were busy with more important things.

The Greater Manchester Police are one of only two police forces to list Islamophobia as a hate crime category. Earlier this year, Chief Constable Ian Hopkins honored Tell Mama for fighting Islamophobia. Tell Mama had lost funding earlier when its claims of a plague of violent Islamophobia fell apart.

Shahid Malik, the chair of Tell Mama, had been photographed with the leader of Hamas. Appearing at the Global Peace and Unity conference, where plenty of terrorism supporters have promenaded, he boasted, “In 2005 we had four Muslim MPs. In 2009 or 2010 we’ll have eight or ten Muslim MPs. In 2014 we’ll have 16 Muslim MPs. At this rate the whole parliament will be Muslim.”

Last year, Hopkins had appeared at a Muslim Engagement and Development (MEND) event at the European Islamic Centre along with Azad Ali. Ali has praised Anwar Al-Awlaki and other Al Qaeda figures. He justified the murder of British and American soldiers, he praised Hamas and Hezbollah. Instead of arresting him, the Chief Constable appeared at the same forum with a terrorist supporter.

Also present was Greater Manchester Police Crime Commissioner and Interim Mayor Tony Lloyd who came by to talk about “eradicating hate”. This was at an event attended by Anas Altikriti of the Cordoba Foundation, who had backed terrorists murdering British soldiers and accused Jews of dual loyalty.

Tony Lloyd will be the Labour candidate in Rochdale; home of the Muslim sex grooming cover-up.

After the attack, Manchester Mayor Andy Burnham vowed on camera, “terrorists will never beat us”. The terrorists don’t need to beat Burnham. He’ll eagerly collaborate without so much as a single slap.

Last year the left-wing politician fought the government’s efforts to crack down on Islamic terror. “It is creating a feeling in the Muslim community that it is being spied upon and unfairly targeted,” he whined.

Terrorists will never beat us. Unless they have their useful idiots operating on the inside for whom Muslim feelings come first and little girls being torn to pieces by shrapnel come last.

Burnham accused opponents of Islamic terror of racism, xenophobia and all the usual stuff. He insisted that there was a huge Islamophobia problem that was being hidden because Muslims were too afraid of the police to report this rash of imaginary crimes.

“There’s a lot of people in this country not necessarily at risk from ‘Islamic extremism’ but it’s far-right extremism,” Andy insisted.

This is what led to the Manchester Arena bombing. Mayor Burnham sold out the police. The police sold out the people. The authorities were chasing Islamophobia when they should have been fighting Islamic terror.

The Islamophobia lie killed 22 people in Manchester. It happened on the watch of the GMP.

No one takes Islamophobia more seriously than the Greater Manchester Police. When Muslim sex grooming gangs were abusing little girls in Rochdale, the GMP dutifully covered it up. On one of the recorded interviews, a police officer can be heard yawning as a girl describes her abuse.

An MP who had pursued these cases said that the authorities “were afraid of being called racist.”

Even after Judge Clifton brought it out into the open, stating, “You preyed on girls because they were not part of your community or religion”, Detective Chief Superintendent Mary Doyle insisted, “I think if we start to get ourselves hung up on race and ethnicity issues, we take away the real issues.”

Detective Constable Maggie Oliver resigned from the GMP for its mishandling of the sex grooming cases. She has warned that offenders are still on the loose. “What I saw in Rochdale was police officers and senior cops acting without any shame because it was convenient to ignore the abuse they knew was happening,” she warned.

Oliver blamed Chief Constable Sir Peter Fahy. Fahy had been knighted for “services to policing”. His “services” included warning that the British government’s Prevent crackdown on Islamic terrorists was contrary to “British values” and would alienate “non-violent Muslims”.

“A lot of Muslims feel that there is a constant anti-Muslim narrative in the media,” he mewled.

Chief Constable Hopkins declared that people have a right to be “safe from hatred”. After the Manchester Arena attack by a second-generation Muslim refugee, he warned, “We understand that feelings are very raw right now and people are bound to be looking for answers … it is vital that our diverse communities in Greater Manchester stand together and do not tolerate hate.”

Feelings will occasionally grow raw when picking the nails of the latest Muslim terrorist attack out of your child’s face or knowing that she has been raped by a dozen Pakistani men. It may even be possible that in their final dying moments, the victims of the Manchester Arena attack were afraid of Islam.

If only they could be prosecuted after death.

The cowardly denunciation of Islamophobia was as strong as anything in Hopkins’ statement. It is Islamophobia, not the victims of Islam, that agitates the Chief Constable’s sensitive sympathies.

It was not the victims of Muslim sex grooming in Rochdale or its cover-up that outraged Hopkins. His greatest moment of outrage came when the London Times headlined the story of an Imam murdered by a fellow Muslim for not being Islamic enough as, “Imam beaten to death in sex grooming town.”

The headline was “offensive to the thousands of peaceful law abiding Muslims”, Hopkins complained.

It wasn’t the abuse of little girls that was the problem. It was calling it out for what it was.

The Jihad has been kept quiet through such shameful expediencies. When the head of the Clarksfield primary school complained about threats to blow up her car due to an Islamist “Trojan horse” plot to take control of the institution, the GMP found nothing.

The Manchester authorities were in the business of fighting Islamophobia. They made that their priority. Not only did they lie about the true threat, but they wasted resources that might have gone to stopping the attack. The blood of innocent children is on their hands. But that’s nothing new.

This time around the consequences were harder to brush under the rug. The world saw what happened in the Manchester Arena. And they were horrified. This time the victims couldn’t be hidden away.

The question is whether anything will be done.

When Reporters Look for a Fight, What Happens When They Get One?