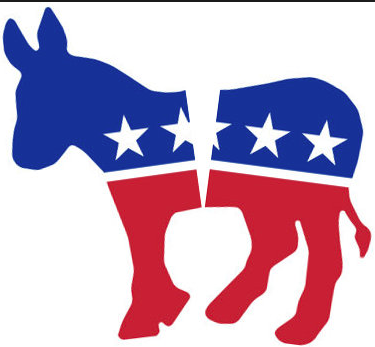 The Democrats have ended their unity tour more divided than ever. Unlike Republican quarrels, their war is mostly ignored by the media. And yet it will define what the left and its plan to take over the country will look like.

When Hillary lost, she didn’t just lose the White House. She also lost the DNC. Her loyalists, already discredited for their brazen tampering to disenfranchise Sanders supporters, had to make way for Obama’s people. The Clinton legacy is over. The Dems belong to Obama now. Or do they?

Barack Obama and Bernie Sanders are the leaders of the two sides in the Dem civil war. The shots are already being fired. As usual, they are coming from the insurgent Sandernistas.

“Obama could have been a better party leader, and I think that the fact that he wasn’t, has put his legacy in jeopardy,” he charged. “We lost a lot of state House seats, governorships, secretaries of states… he can’t say that he wasn’t part of those losses. I mean, who else?”

Who else indeed? It’s an obvious question that can’t be asked in Dem circles. Obama is the only truly national figure that the party has. And he has used the fall of the Clintons to take over the DNC.

If Obama is really responsible for Democrat losses, then the party and its donors just bought first class seats on the Titanic. That’s why Democrat autopsies of the defeat remain so explosive. Blame can be apportioned to white people, to racism, Islamophobia and to Global Warming, but not to Barack Obama.

Keith Ellison was the best messenger Sanders had to take a shot at Barry. Black loyalty to Obama is still the third rail of politics. And Ellison is one of the few black people in the Sanders inner circle. Obama’s pricey Wall Street speech offered the opportunity for a more direct attack from Bernie Sanders.

“I just think it is distasteful,” Bernie slurred on CNN. “At a time when we have so much income and wealth inequality … it just does not look good.”

The attack went to the heart of his differences with Obama. Unlike the Clinton era, the split is no longer between the left and the radical left. Obama and Sanders are both representatives of the radical left.

But they don’t represent the same radical left.

Bernie embodies the old left. Its mantra is class warfare. There is a great deal of talk about billionaires, working people and the ruling class. Obama pays lip service to that same rhetoric, but his is the program of the intersectional left. The intersectional left is far more interested in identity than class. It defines its organization around a coalition of racial, sexual and other minorities. Where Bernie wants to talk to the working class, the intersectional left wants to hear from transgender Muslim women of color.

The differences aren’t just intellectual. They define the tactics and agenda of the Democrats.

When Tom Perez, Obama’s DNC boss, recently read pro-life Democrats out of the party, he was following the Obama blueprint. Bernie meanwhile went on campaigning for a somewhat pro-life Dem. Bernie does not really care about abortion, gay rights, transgender bathrooms and the social issues of the intersectional left. The old Socialist follows the older slogan of the hard left. No war, but class war.

Bernie Sanders has been repeatedly dismissive of identity politics. “It’s not good enough for someone to say, ‘I’m a woman! Vote for me!’” he had sneered.

“One of the struggles that you’re going to be seeing in the Democratic Party is whether we go beyond identity politics,” he had insisted.

“Whether its gay rights, women’s rights, civil rights, you are talking about people fighting for liberation in a particular way,” Bernie said in an interview. “This… is a more generalized resistance… it is moving in the direction of a class based way… you aren’t seeing this just in this country, but all over the world.”

Workers of the world unite. You have nothing to lose but your granfalloons and artificial divisions.

And the Dems paid the price.

Obama’s reign torched most of the last of that white working class base. Trump’s victories would not have been possible if the Dems had not become a party of wealthy bicoastal urban and suburban elites who were out of touch with the South and the Rust Belt. And who were proud to be out of touch with a bunch of “ignorant racist, sexist homophobes” still “clinging to their guns and religion”.

The clash between Bernie and Obama is also over the autopsy of Hillary’s defeat. Did the Dems lose because they failed to turn out the base as effectively as Obama had or because former Obama voters had come out for Trump? Should the Dems try to appeal to working class whites with a class warfare pitch or work harder to turn out the intersectional coalitions of minority voters?

Bernie and Obama learned very different lessons from their political experiences. Vermont is a largely white state. If you can’t appeal to white voters, you can’t appeal to anyone. Obama won in Illinois with large totals in Cook County while disregarding Wayne County. The white conservative Protestants who voted for his opponent could be largely ignored. They were swept away in the landslide.

Even though Illinois went mostly red, Cook County did deliver Illinois for Hillary. But Chicago isn’t America. That’s what Obama still doesn’t understand. And so the Dems don’t get it either.

The Democrats are caught in a civil war over two kinds of ideological purity.

The Bernie faction would purge what they view as the corporate wing; that comfortable alliance of the wealthy urban social left with its minority coalitions and obsessions with abortion and gun control. And then refocus the party on class warfare to unite minorities and white working class voters.

The change to the Dems would be almost incomprehensible. And most of Bernie’s college hipster supporters who get triggered by stray gusts of wind don’t even understand that this is the agenda.

The Obama faction wants to purge conservative deviations from their social line on abortion and gun control. This ideological consolidation would shift the party further toward urban and suburban coastal elites while continuing to alienate white working class voters. The intersectional left remain convinced that these voters will be replaced by a new majority of immigrants, domestic minorities and college whites. Alienating these voters is a calculated strategy to force the Dems to accelerate the new majority.

The Bernie faction argues that a 50 state strategy is impossible without the white working class. But it’s hard to think of any worse messengers to the white working class than Bernie Sanders and Keith Ellison. The Obama faction is convinced that increasing minority turnout without sacrificing a single social dogma is possible in every state. Class warfare can be funded by Wall Street donations. White voters in Nebraska will learn to cheer Black Lives Matter protests. And it will all end in a beautiful synthesis.

It’s not just about strategy. It’s about what both factions envision America should look like.

The left’s utopian visions are inversions. They take what the left hates about a country and inverts that into an ideal society. These visions appear outwardly positive, but are deeply negative.

The two lefts hate different aspects of America most.

The old left is anti-economic. It hates free enterprise most of all. It is motivated by an endless spite aimed at the middle class and upper class for their success. Its ideal society inverts all that independent economic activity into a system in which resources are “fairly” administered by the state.

The intersectional left is anti-social. It hates white people, men and women living normal lives. It obsessively seeks to deconstruct all of society by attacking its norms as supremacism and oppression. Its ideal society is an intersectional caste system with white people and married couples at the bottom.

The left embodies both an anti-economic and anti-social agenda. The debate is over what comes first.

The old left insists that social differences will fade away under Socialism. The intersectional left believes that without social deconstruction, Socialism will just mean white supremacy and hetero-cis power.

That is the Bernie and Obama split in a nutshell.

Both factions of the left are utterly deranged. Their ideologies are built on hatred and can only cause misery. And they are now fighting each other for control of the left, the Dems and the country.

Sandra Solomon: The Hajj in Islam and Sexual Harassment