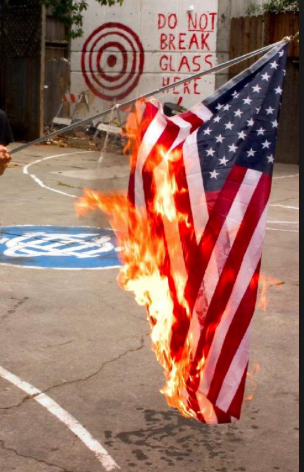 The LA Times reported that during the May Day marches in downtown Los Angeles a black masked man began burning a small flag he held in his left hand. LAPD officers “swept in, handcuffed the protester . . . led him away to a patrol car under arrest for suspicion of arson. . .”

The article’s author lamented that it was an act of protest, not arson. The man was later let go without charges.

Across the country these violent masked “protesters” claim justification to violence as they create havoc, burn flags, destroy property and physically attack people by declaring they are anti-fascists. Their name is Antifa.

Antifa or anti-fascists are a mutant faction of the original international movement formed in the 20th-century by militants who initially organized to fight the rise of fascism in Germany, Italy and other European countries. Their tactics include physical confrontation to those who disagree with their culture assessment.

Antifa NYC told The Nation: “Antifa combines radical left-wing and anarchist politics, revulsion at racists, sexists, homophobes, anti-Semites, and Islamophobes, with the international anti-fascist culture of taking the streets and physically confronting the brownshirts of white supremacy, whoever they may be.” They refuse to debate – an attribute of actual fascism.

One of the Urban dictionary’s definition of a fascist is,

“. . .If you do not see things our way, you are wrong. If you do not agree with the government, you cannot be allowed to live and taint the minds of the rest of the good citizens.”

Antifa was behind “Disrupt 120” protests in Washington D. C. during President Trump’s inauguration. They joined with another organization, By-Any-Means-Necessary (BAMN), who describes itself as The Coalition to Defend Affirmative Action, Integration and Immigrant Rights and Fight for Equality By Any Means Necessary.

These are two of multiple radical groups active today in the USA with the expressed intention to destroy the American way of life.

Very few Americans realize there exists a large network of far left philanthropists and foundations in America dedicated to destroying the American way of life, our Christian-based culture and our free enterprise system.  They seek to remove America from its constitutional foundations and move it toward a European-style socialism.  Much of this effort is coordinated by a little known group called the Tides Foundation and its related group, the Tides Center.

The Tides Center is funded by George Soros.

There are laws to protect our government and nation against such alliances, but they need to be exercised.

Whoever incites, sets on foot, assists, or engages in any rebellion or insurrection against the authority of the United States or the laws thereof, or gives aid or comfort thereto, shall be fined under this title or imprisoned not more than ten years, or both; and shall be incapable of holding any office under the United States.

Whoever, with intent to cause the overthrow or destruction of any such government, prints, publishes, edits, issues, circulates, sells, distributes, or publicly displays any written or printed matter advocating, advising, or teaching the duty, necessity, desirability, or propriety of overthrowing or destroying any government in the United States by force or violence, or attempts to do so; or

Shall be fined under this title or imprisoned not more than twenty years, or both, and shall be ineligible for employment by the United States or any department or agency thereof, for the five years next following his conviction.

If two or more persons conspire to commit any offense named in this section, each shall be fined under this title or imprisoned not more than twenty years, or both, and shall be ineligible for employment by the United States or any department or agency thereof, for the five years next following his conviction.

Our culture has a system of government that has as its governing philosophy a constitution and a commitment to the rule of law. We elected a president, a congress, and a senate who swear an oath to the constitution, so help them God.

Nevertheless, there is a ruthless attempt to impeach or overthrow our newly elected president being led by Democrat party’s leaders, their propaganda press and domestic terrorists groups, who are self-appointed, unelected thugs.

The Supreme Court ruled in a number of cases that symbolic expression, which includes flag burning, may be protected by the First Amendment.

The court might do well to further consider differentiating of the motives behind the burning of the flag, recognizing the difference of intent between civil policy protests verses sedition.

It is time to restore our commitment as citizens to the pledge of allegiance to the United States of America flag.

The Pledge of Allegiance

I pledge allegiance to the Flag of the United States of America, and to the Republic

for which it stands, one nation, under God, indivisible, with liberty, and justice, for all.