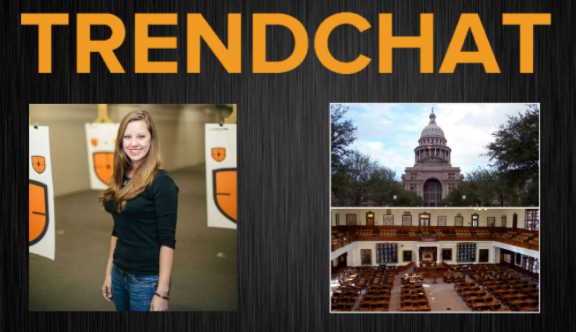 Last week I went with the Northeast Tarrant Tea Party to the state capitol in Austin, TX to visit offices of a few Texas Representatives to make our argument for or against various pieces of legislation. In Texas the state Congress meets every other year for 140 days, but can be extended if a special session is called. There has been speculation that a special session will be called this year due to the lethargic pace of passing legislation in the Republican controlled Congress. We wanted to encourage the members of Congress who are fighting for conservative principles and give let them know that we appreciate their efforts and to stay the course. In a previous episode of TrendChat I talked about my last-minute trip to DC and a few funny moments I experienced going into some of the offices there (I had a similar experience in Austin).

In this week’s episode I spoke with a true champion for our right to bear arms, who is a great example not only for women in the Second Amendment community but to everyone who values their right to self defense.  As I discussed last week on TrendChat, I recently went to Defender Outdoors in Fort Worth to pick up my brand new Springfield Saint AR-15. Before I took my first shot, I was able to speak with the Director of Defender Outdoors, Jerah Hutchins, about the process of purchasing a firearm. Ms. Hutchins has been involved in a number of gun clubs which combine the atmosphere of a gun range as well as the feel of a country club, or a “Guntry Club” of sorts. We also talked about training and what Defender has to offer to make people like myself more confident in carrying their firearm, as well as how to become a board member in EmPOWERed and how she got involved in this rapidly growing movement.

Dr. Bill Warner Regarding the Problem of Islamic Reform: How Do You Reform Allah's Perfection?