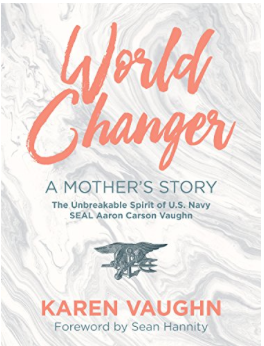 World Changer: A Mother’s Story: The Unbreakable Spirit of U.S. Navy SEAL Aaron Vaughn should be read by every parent. It is written by the Mother of U.S. Navy SEAL Aaron Vaughn who made the ultimate sacrifice in the largest single loss of our elite Warriors in Afghanistan on August 6, 2011. Aaron Carson Vaughn was born in 1981 to his young parents Billy and Karen Vaughn. He spent his most formative years on a West Tennessee farm helping his Dad with farm chores and being an adventurous young boy. He participated in sports, spent summer days at the pool, and attended church. He dressed in camouflauge and hid under leaves crawling on his belly to his Aunt’s house practicing for his future of becoming a Navy SEAL. By the age of 8 years old Aaron was telling everyone he was going to be a SEAL.

Aaron had to accept disappointment’s in his life that could have caused him to give up on his dream. Serious sports injuries made him ineligible for the rigorous training required of those in the SEAL program. But Aaron believed he had a purpose, and it was to become a SEAL. He loved people and he believed in the greatness of America. He had a spirit of determination and grit and it was his undying spirit and devotion to something higher than himself that gave him the strength to overcome extreme obstacles. Aaron possessed strong faith and dedicated his life to Christ at a young age. He believed becoming a SEAL was his life purpose, one that God instilled in his heart. Aaron not only became a Navy SEAL, he became a member of the elite SEAL Team Six. Very few can ever dream of such an accomplishment.

So how does one have such strength of character and dedication? How does a parent raise a child to possess these qualities? It doesn’t just happen, it’s raising a child intentionally. Karen Vaughn reaches deep within her heart and soul to tell us her story of raising a world changer. A man who through his life well lived, and through his ultimate sacrifice for our country is influencing countless others to become world changers right where they are. I will be certain my grandson knows Aaron Vaughn and the principles his parents instilled in his heart; love of God, family, and country.. and a never give up attitude. You don’t want to miss this opportunity to get to know Aaron Vaughn, world changer!
Side Note: I have communicated with Karen for a few years, and then had the privilege and honor to meet her and her husband Billy. They are friends that I respect deeply, true Patriots, and Godly people. I want the world to know Aaron Vaughn. Billy and Karen raised a world changer, and our world is forever better because of them. Parents and grandparents.. I hope you will use the Study Guide that goes along with this amazing book. We need more Aaron Vaughns.

Get the book here:  https://www.raisingworldchangers.net

Memorial Day: Respect For All Warriors