Let’s look at the heritage and history of the confederate battle flag.

The confederacy was represented by the Democrat party who wanted to keep slavery legal. They wanted to keep it legal so badly they made their own Constitution of the Confederate States that included the pro-slavery language that the U.S. Constitution never had.

So don’t try to tell me that the civil war had nothing to do with slavery.

Here’s the confederate flag as Stars and Bars.

It was changed because it looked too much like the Stars and Stripes, so it became the Stainless Banner. 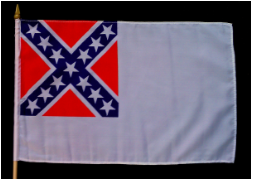 Why did the Democrats decide on the Stainless Banner? Because the white field represents the “Heaven ordained supremacy of the white man over the negro.”

However, it was changed because the Stainless Banner looked too much like a flag of surrender so it became the Blood Stained Banner. 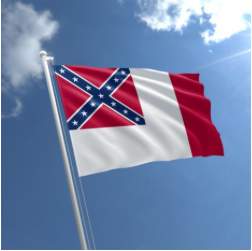 Very typical of the Democrat party that’s always changing it’s tune. That is definitely a heritage and history of the democrat party.

Now you’ll have those jumping in to correct me making sure that I know that the confederate flag is not a national flag. It was the flag of Virginia or Tennessee or what ever. I get it, it’s a battle flag.

All the more reason why state buildings shouldn’t fly it.

If it’s a “Battle Flag”, then that means you are saying your state is in a state of war against the very united states soil you’re standing on.

So I’m sorry guys, the confederate flag is not a symbol of southern pride it’s a symbol of democrat shame.

If you vote republican or conservative and you have any affection for the confederate flag, you are seriously confused.

You are waving a flag that was created by democrats who had murderous hatred for republicans.

You are waving the flag of a party who had total disregard for the rights of others and took liberties with their rights, the same way democrats do today.

And don’t give me some nonsense about being brain washed by the school system trying to make the south look bad.

What? You mean the school system run by democrats who hijacked the educational system so they could mask their own history and lay the blame on someone else?

You think the democrats brainwashed me? No sir.

They didn’t get to me. They got to you.

I’m not the one waving around their flag. You are.

You’re idolizing their monuments like Jefferson Davis; a Democrat. The reason why they want it removed is so THEY can remove the “heritage and history” of who THEY are, so they can continue to blame republicans.

As it’s said, “Pride comes before destruction.” Because of that flag many of y’all are destroying the effort to expose the true history of the democrat party. And it keeps the culture deciding it’s the republicans who are racist. This can be fixed if we can just get those few people to let go of that flag. And it’s just a few, but that’s all the democrats need to make it look like it’s all republicans.

That’s why we’re still dealing with all this race baiting nonsense that’s coming to a boil.

Do I agree with removing the statue of Jefferson Davis? Not exactly, because this an exercise in left wing belligerence. They want to tear down everything and have chaos. They accuse America of slavery and racism just as much as the confederacy.

Their objective is to obscure the truth and promote denial about the democrat party – the party who continued to institute apartheid in America. They have to make it look like is was America in general. It wasn’t. It was the democrats.

Leave them to their course and they will come after the statue of Lincoln. They’ve set their sights on crosses and Christ is the ultimate liberator so they hate Him the most!

If you’re going to defend the statue of Jefferson Davis, let me offer a suggestion. You should have insisted that it be left alone because he was a democrat and Americans should know it was the democrats who represented the confederacy. The democrats took liberties with people’s rights then, and they do it today. But the democrats are trying to hide these things, like Hillary Clinton hiding emails.

If you’re waving around the flag of the party that wanted to kill you, and waving it with pride and affection, then you’re brainwashed.

If you’re whining over the removal of the statue of a democrat who went to war against America, you’re brainwashed.

Democrats who have been running the educational system don’t want you to know that. Proof. They’re insisting on the removal of their history so they can slander others and keep people deceived.

AlfonZo ("Zo") Rachel is a Christian conservative social/political humorist. His work is distinguished by his grinning delivery and rapid-fire rant style in his video commentaries called ZoNation on PJTV.com. Rachel is also the founder and drummer for 20 lb SLEDGE. Zo has written a book, WEAPON OF A.S.S. DESTRUCTION (American Socialist States). Visit his website at AlfonZoRachel.com Read more at http://alfonzorachel.com/about#VHz5kOOmTRY5P1C1.99