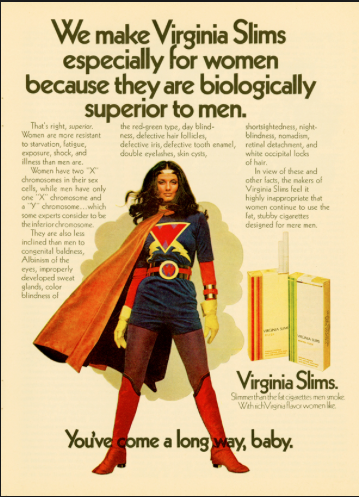 When discussing women’s rights and feminism, I have returned several times to that famous tag line used in the 70’s, at the height of the women’s movement by Virginia Slims, marketed as a “woman’s cigarette”, “You’ve Come A Long Way Baby”. Not that anyone is condoning something unhealthy like smoking, but just taking a casual look at the history of the equal rights movement for women, you have to admit, they were right. From the earliest days of the Suffragette movement to Rosie the Riveter to women who became household words like Gloria Steinem and Betty Freidan, one would have to admit, we have come a long way Baby.

When a high profile figure becomes embroiled in a sexual harassment or abuse case, self-proclaimed “feminists” seem to crawl out of everywhere to rail against the accused and profess their outrage and disgust. They are quite comfortable with the assumption that they are speaking for all women. The recent case against now former Fox News Channel Host Bill O’Reilly is no exception.

During a recent panel discussion on a local St. Louis radio station the topic of O’Reilly was introduced. The Host addressed the lone woman on the panel first for some introductory female perspective. What stood out was not what she thought about the case, but when she began her comments with, “Well, as a feminist…..” I have just one question about that, in 2017, just exactly what is a feminist?

It would seem that the term itself, “feminism” is a highly subjective concept. It means different things to different women. I have always wondered, when I came along in 1965, if my mother would have had any idea the opportunities that would become available to me in my lifetime. Would it have been hard for her to imagine, in a day where about the only jobs outside of being a housewife open to women were to become nurses, teachers, secretaries, or as they said back in the day, stewardesses, that there would be no limit to the heights to which I could soar?

So what are some popular ideas of what feminism is in 2017? Well, for liberal women it means parading around in oddly shaped pink hats, reportedly meant to symbolize female body parts. If that is not enough, they actually dress up as said body parts. Apparently that is supposed to raise credibility for their cause. They find microphones and talk about being “nasty women” and proceed to inform the world that they don’t find much time to do laundry given the soiled state of their bedsheets. Well, doing laundry is kind of chauvinistic I guess. The woman on the panel claimed that prior to her current job where she works primarily with women, that almost every day she was subjected to some form of sexual harassment. That seemed a bit extreme to me until I remembered that for liberal women, simple common courtesy like opening doors and pulling out chairs is a reason to storm Human Resources.

At the risk of taking a play from the liberal feminist playbook, I think I can speak for, of course not all conservative women, but maybe a few. As conservative women, I think much of our definition of feminism is about choice. That option of choice stems from the fact that we are blessed to be first and foremost American women. We can choose to stay at home and raise our children, we can get an education in anything we, there’s that word again, choose. We may find our life partner early in life and marry young; we may find that person later on in life, or not at all. Again, the choice is ours. We may choose to skip college and start our own business. Instead of celebrating all of this choice, liberal women yell and scream about how we will not be paid as much as men, will have a harder time getting into college than men, and will have a harder time getting a small business loan than men.

The bottom line is that feminism has many definitions, and it may sound squishy, but those definitions have changed as women have gained more and more equality. Traditional feminists no longer get to define the term. Maybe the tag line for a new generation of feminists is, “I’ve Come A Long Way My Way Baby”.

NYU Protests: This is What it Looks Like When You Want to Stop Free Speech