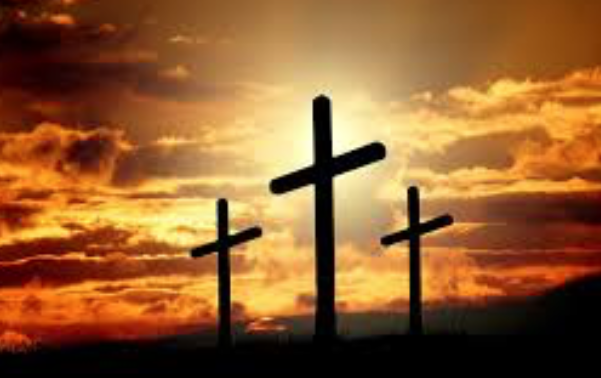 Three crosses stood on the hill that awful Friday. Crucifixion wasn’t anything new to the culture. The Romans used this type of punishment and death to wield their power over the people. New Testament scholar Hal Taussig believes the Romans killed “tens of thousands by crucifixion”. This was a way of removing threats against the government. The physical suffering which took place during this long, painful death was beyond reason. Stephen Mansfield called crucifixion, “an act of state terror”.

For Jesus of Nazareth, the pain and humiliation was even worse. Jesus’ crucifixion began with a horrible flogging (John 19:1 NIV). The instrument of evil used to flog people was called a Flagrum. This whip was made with leather straps which had small pieces of metal and bone embedded in the straps. The one being scourged would bend forward and the Roman soldier would whip the person causing the pieces inserted in the straps to impale the skin and then be ripped out, as the whipping occurred. Tearing the skin and leaving deep, open wounds. Floggings prior to crucifixion were not uncommon. However, Jesus had the additional torment from the Roman soldiers of a twisted, “crown of thorns” firmly placed on His head, a purple robe put on His bleeding back, and He was mocked by Pilate with a sign hanging above Him on the cross which read, “Jesus of Nazareth, The King of the Jews”. (John 19 NIV). The cross on which Christ gave all can very easily be called “The Cross of Redemption”. The cross where Christ took our sins and redeemed them for all who will believe in Him.

For many Christians, Christ’s death, burial and resurrection is remembered weekly through the act of communion. But once a year, at Easter, the entire world comes together to remember the absolute sacrifice of Jesus Christ when he died on a cross on a lonely Friday and leaving an empty tomb on Sunday because of His glorious resurrection from the dead.

We sometimes fail to consider the condition of the two actual criminals on either side of Jesus, on that lonely, blood stained hill of crucifixion. These are the other two crosses in the story of redemption. One man hurled insults at Jesus and mocked Christ’s declaration of being the Messiah, thus becoming “The Cross of Rejection”. While the other man began to believe in the divinity of Christ, and as a result, became “The Cross of Reception”. (Luke 23:35-43)

America, and much of the world, stands in the same positions. As a culture and community, our belief or lack of belief relegates us to either the side of rejection or reception of the cross and what it did for all of eternity.

In America, the message of Christ has been watered down because people are more interested in having life “our way”. Many believe not acknowledging the existence of God and Christ will allow for absolute freedom. If able, at minimum, some believe to put God in a box with a tight seal or dispose of Him completely will allow for full consciousness of how life is to be lived. This way of thinking believes everyone must adjust for these beliefs, whether it is political beliefs, religious beliefs, morality, anything. All areas of life must be free of words believed to be “triggers” which cause a bad, insecure, accountable, feeling in individuals. There must now be safe spaces to run and hide, until the threat of alternative ideas and beliefs have turned and walked the other way. By succumbing to this ideology, we have declared the world to be in a “post-Christian” state. Thus, we become the thief on the cross hurling insults at Christ, carrying our cross of rejection.

There is still a contingency of people who hold to the Bible and the belief confessed on the other cross by the receptive criminal. This criminal realized, through his pain and anguish, he truly was a sinner and Christ was not. He was able to realize his sentence of death on the cross, as well as the other criminal’s, was justified, yet Christ’s crucifixion was not. He saw the fulfillment of the death of the Messiah first hand (Isaiah 53:5-6, 8, 12), as the Prophet Isaiah had written. He believed and through that belief, his and ours, we carry the cross of reception. The reception of God’s forgiveness, through Jesus’ death.

Finally, there is the group of onlookers. Some of the onlookers were family and friends (John 19:25). Others were people whom Jesus had walked through the streets of Jerusalem with or maybe they were people whom He had fed (John 6:1-14). In that crowd were believers and skeptics, just as the two crosses, which stood on either side of Christ. They too, had to decide which cross they would bare.

Whether the death of Christ is something you focus on daily, weekly or annually, we stand at the cross again, as a nation, and must ask ourselves, “Which cross is mine?”. We must not listen to the world’s educational elites and cultural philosophers, telling us where we truly are as a nation. We must listen to our hearts and the voice of God, whispering ever so softly to us. Speaking to us personally. As a people, we must determine what is truth, not what is preference. We must be willing to go against everyone telling us “America is not a Christian nation”. A nation with biblical morals and direction, would be fabulous, but what matters is personal morals and values. If we want freedom, that freedom comes through Christ and Him alone. Not from a government and its legislation. Freedom, especially in Christ, is not dependent upon what Washington says or does. Freedom is dependent upon the way in which we, as free and independent people, decide how we will live. Which cross will we choose: “The Cross of Rejection” or “The Cross of Reception”? Jesus died on “The Cross of Redemption” which is where true freedom is found.

Thus, all of us are continually faced with the same questions the Israelites were challenged to answer, “But if serving the Lord seems undesirable to you, then choose for yourselves this day whom you will serve, whether the gods your ancestors served beyond the Euphrates, or the gods of the Amorites, in whose land you are living. But as for me and my household, we will serve the Lord.” (Joshua 24:15 NIV)