Fake News of War rumored in Washington D.C., and if the President’s administration is not careful they could find themselves combating several conflicts, simultaneously. After threatening North Korea, President Trump has committed to taking military action against the Assad regime in Syria.

In 2012, then President Barack Obama took a question from a reporter about the hypothetical use of military force in Syria as it relates to the use of chemical weapons. Obama stated that while he had not yet ordered the use of force in that country, the utilization of chemical weapons would be a “red line” for him and his administration. It was an uncharacteristically bold statement that put Syria and the world on notice, that the United States would not sit idly by while barbaric, inhuman weapons were used to torture and murder people. I’m not generally a big fan of Barack Obama, but he was right to take the stance he did at that time.

Unfortunately, Obama was wrong – very, very wrong – to back down from his famous “red line” pledge. Less than a year later, under orders from dictator Bashar al Assad, a chemical weapons attack killed some 1400 Syrians, and though the world looked anxiously to see Obama be true to his words, they were disappointed. Our President did nothing, casting a dark shadow of weakness and indecisiveness over the United States and sending the awful message that we were inclined to stand aside and allow the use of chemical weapons.

Of course, that was then, under Obama. We have a different President now, one who doesn’t hide from America’s promises and who doesn’t believe in making our country appear indecisive. When Assad used chemical weapons 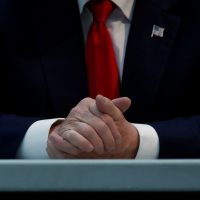 again recently, targeting his own people who were rebelling against his tyrannical regime, a resolute President Donald Trump took action: he ordered a devastating cruise missile strike against the Syrian air base from which the chemicals had originally been launched, destroying that site’s ability to use these horrendous weapons and – perhaps even more importantly – sending a clear message that such weapons will not be permitted by the United States.

Predictably, the resident “never Trump” crowd (the same one that never quite got over Trump’s nomination as the Republican primary candidate, let alone his victory in the presidential election) came out to criticize his show of force, calling it everything from futile to a precursor to World War III. Again, I’m really not surprised by the attitude from these individuals, but their attacks are completely unjustified. President Trump’s response to Assad’s contemptible use of chemical weapons against his own people was measured and necessary. Putting aside for a moment – but, please, only for a moment – the humanitarian atrocity of such barbaric weapons, we have a compelling national security concern in deterring their use. Today it is men, women, and children in Syria suffering these chemical attacks, which is more than bad enough. Do we dare risk the consequences of having terrorists believe we will tolerate this behavior, potentially leading them to strike us in such manner here at home?

Instead of trying to undermine a sitting President during a time of hostilities and potentially war, Trump’s critics might do better to ask precisely how we arrived at a situation in which the use of force became necessary. Why were there chemical weapons in Syria in the first place? After all, in 2014, President Barack Obama negotiated a deal with Russia and Syria in which the latter would agree to turn over its chemical weapons and precursor stockpile, and we were repeatedly assured that this turnover was completed. The world’s second largest reserve of chemical weapons was gone. So what happened?

Well, at the very least, Barack Obama failed colossally to properly monitor Syria and ensure compliance with the deal – something he never should have trusted them to do in the first place. But given the character of some of the people in US government at the time, we’re sadly forced to wonder about more sinister possibilities.

That fact is that the North African nation of Libya possessed chemical weapons following Obama’s deal. At that time, evidence (scarcely discussed by the media, naturally) surfaced from The Free Thought Project that the US Consulate in Benghazi (remember that place?) was running supplies to Syrian rebels, ostensibly to aid in armed resistance against Assad’s regime. It should hardly be necessary to point out, of course, that the US Secretary of State at this time was none other than Hillary Clinton.

Seymour Hersh, a Pulitzer-prize winning journalist, argued that the US State Department was clandestinely supplying Libyan chemical weapons to Syrian rebels. The rebels, then, would use the weapons not against Assad’s forces, but their own – in a “false flag” operation that would implicate their enemies in having violated the deal. The supposed purpose of this was to drum up support for an American invasion of Syria (an unnecessary step then as now and unacceptably costly, but perhaps the administration felt differently), thus giving Obama a cover.

It’s a terrible thing to even contemplate, but the pieces all fit together. Frankly, Assad is winning the civil war against the Syrian rebels; he has no need to deploy chemical weapons against them and risk the kind of American military intervention against him that has just occurred. Even considering the horrific suffering of the victims of these weapons, it is the rebels who benefit most from the attack.

Whether Clinton and Obama were up to anything or not, President Trump’s cruise missile strike was a necessary response to the use of these gruesome weapons. It’s essential to our national security – to say nothing of simple human decency – which we prevent chemical weapons from being normalized or even tolerated, it should be forbidden in today’s modern society.

President Trump’s Reelection Campaign Has Already Raised Over $13.2 Million in 2017