Hundreds of LGBTQ protesters invaded Ivanka Trump’s upmarket neighborhood in Washington D.C., for the ‘Queer Dance Party for Climate Justice’, much to the fury of other residents.

A storm of dancing people marched with signs, speakers and festive clothing while chanting obscenities directed towards the first daughter’s father to protest his administration’s rollback on Obama’s climate change policies, on Saturday night. 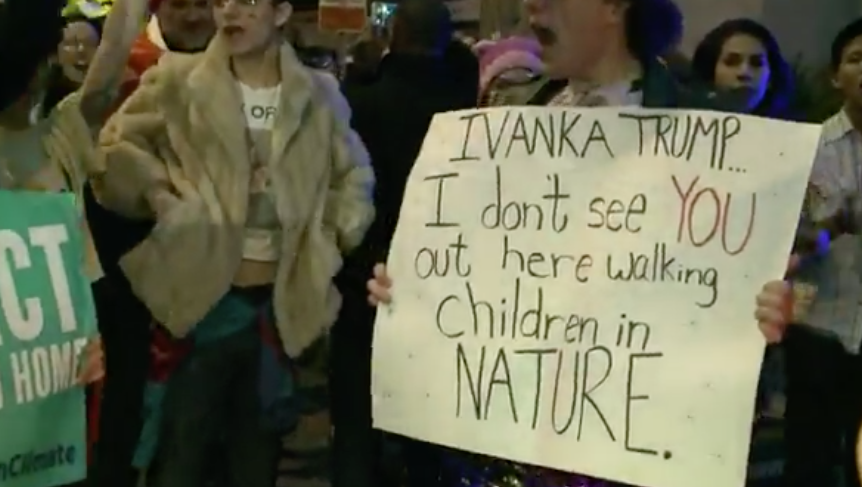 The rowdy crowd disrupted the usually exclusive area as they flocked to Ivanka’s $5.5million home, as one of her neighbors became so infuriated by the noisy event that he was filmed threatening to punch a demonstrator.

The 82-year-old enraged resident of the expensive Kalorama community yelled to protesters: ‘Get out of here! I live here… Do you want to get your f**king face hit?’

The protest may have fallen on deaf ears, as Ivanka and family didn’t seem to be home to witness the event.

She was last spotted in New York City on Friday as she was in town with her three children to celebrate her youngest child’s birthday with her in-laws.

The presidential family might have some explaining to do to the neighborhood association, as residents complained earlier in March that their lack of community etiquette was ‘ruining’ the suburb.

The participants held signs that told Ivanka to ‘get natural’ and criticized the businesswoman for not walking her ‘children in nature’.

Police cars lined the streets of where the mother-of-three resides when in the nation’s capital, while barricades and yellow tape were placed to guard anyone from actually stepping onto the property.
However, this didn’t deter the protesters from blasting music from speakers, singing along to Queen’s rock anthem We Will Rock You and dancing on the roofs of cars.

The commotion was the boiling point for one man who was filmed by Ashley Rae Goldenberg at MRCTV, screaming at a man and woman for seemingly being involved with the perceived disruption.

The night was organized by WERK for Peace, a queer activist collective, along with 350 DC, Queer Resistance and the Trans Women of Color Collective.

Carla Aronsohn, a co-organizer told the Huffington Post why the groups banned together against Ivanka, who recently was given an office in the White House for her new unpaid role.

Aronsohn said: ‘We can’t let Ivanka trick our communities into supporting and legitimizing her. We will show up to her home because the bad decisions of the Trump administration hit us in our daily lives, in our homes, and the nature we surround ourselves with.

The activist claims that Ivanka has been ‘green and pink washing our climate and queer family’ and added, ‘If Ivanka Trump isn’t gaslighting us, then she should come into the streets and work it!’

Why the Left Denies the Jihad in London