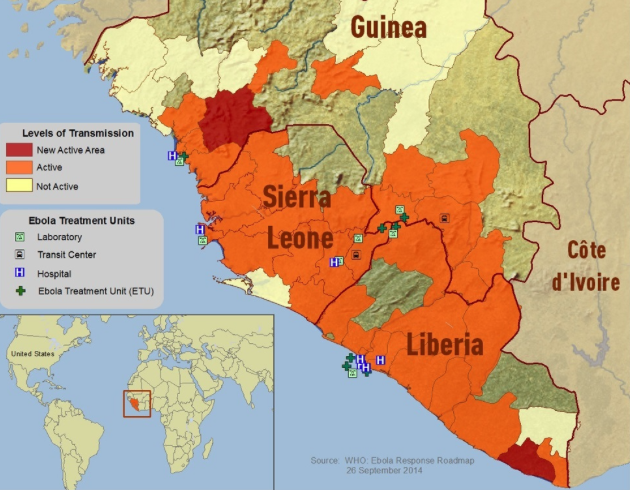 In a refreshing move, the Trump administration is eliminating one of Barack Obama’s many outrageous amnesty initiatives, this one involving illegal immigrants from African countries affected by the Ebola virus a few years ago. The Ebola amnesty scandal got buried in the hoopla of the administration’s broad executive order protecting millions of illegal alien Mexicans and Central Americans, but it was just as alarming. Launched in 2014, the Ebola reprieve was issued separately—and quietly—via a Temporary Protected Status (TPS), a humanitarian program that’s supposed to be short-term.

Under the plan, the administration designated Liberia, Guinea and Sierra Leone for TPS for 18 months. That’s how it always starts—for a short period of time then it grows into years. Before you know it, illegal aliens who benefit from TPS for humanitarian reasons are legal residents enjoying all the generous perks—free education, food stamps, medical care etc.—that Uncle Sam has to offer. This scenario has been repeated over the years under both Republican and Democrat administrations. For instance, “temporary” protection for Hondurans and Nicaraguans has been extended over and over again thanks to a hurricane (Mitch) that hit the Central American countries more than a decade and a half ago.

Another recent example is the TPS the Obama administration gave to nearly 50,000 Haitians after the 2010 earthquake. In mid-2011 the former president’s first Homeland Security Secretary, Janet Napolitano, renewed it through 2013 and when that temporary order expired the Haitian TPS got extended yet again until the end of January 2016. “The Secretary has determined that an extension is warranted because the conditions in Haiti that prompted the TPS designation continue to be met,” according to the extension announcement. “There continues to be a substantial, but temporary, disruption of living conditions in Haiti based upon extraordinary and temporary conditions in that country that prevent Haitians who have TPS from safely returning.” Recent news reports have revealed that the Trump administration may finally end the Haitian protected status, which may deport some 50,000 Haitians living in the U.S. illegally due to a natural disaster that occurred seven years ago.

The first Ebola amnesty was issued in November, 2014 “due to the outbreak of Ebola virus disease in West Africa.” Besides nationals of Liberia, Guinea and Sierra Leone, it also covers “people without nationality who last habitually resided in one of those three countries,” according to a U.S. Citizenship and Immigration Services (USCIS) announcement issued under Obama. The protected Africans were not only shielded from removal but also received authorization to work in the U.S. like all other illegal immigrants benefitting from TPS. When the “temporary” protection expired, the Obama administration simply extended it in March 2016. At the time, the administration acknowledged that there had been “significant improvements in the conditions in all three countries,” but the “lingering effects” of Ebola and “recovery challenges” supported the six-month extension, which expires on May 21.

This month the Trump administration announced that the African Ebola TPS will be terminated for illegal aliens from Guinea, Liberia and Sierra Leone. “To provide sufficient time for an orderly transition, the Department of Homeland Security gave beneficiaries under these three designations 8 months advance notice of the expiration by publishing 3 notices in the Federal Register on Sept. 22, 2016 (one for each country),” reads a USCIS statement issued last week. “These notices urged individuals who did not have another immigration status to use the time before the terminations became effective in May to prepare for and arrange their departure from the United States or to apply for other immigration benefits for which they may be eligible.” The announcement further says that the widespread of transmission of Ebola virus in the three countries that led to the protected designation has ended.

Follow all the great things Judicial Watch is doing for America HERE.

And listen to what Rush Limbaugh said about this subject back in 2014: