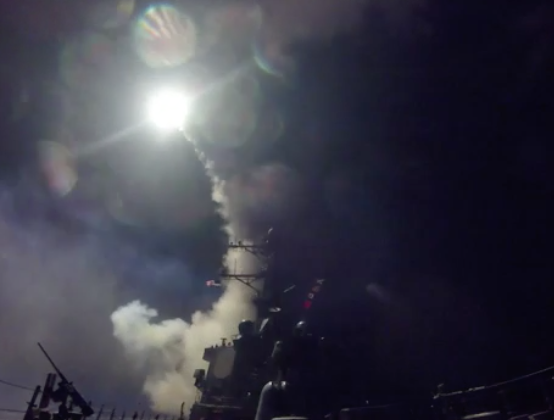 After the chemical attack on Syrian citizens in 2013, PolitiChicks extensively covered the problems involved in siding (or not siding) with people who are diabolically opposed to everything America stands for.  On one hand, Sen. John McCain became a cheerleader for the Syrian “rebels” and practically begged then-president Obama to bomb Syrian president Bashar al-Assad into smithereens. On the other hand, if America were to do McCain’s bidding, what about Russia, Iran, and other Middle Eastern countries who certainly would not side with us?  And how do you choose a side when both sides are bad?

In light of Thursday’s U.S. missile attack on Syria, the following are  links to some of our 2013 PolitiChicks articles regarding the problems that began in 2013 and have led up to today.  Who is Assad, who are the Syrian “rebels”, and what is this strange involvement by Sen. John McCain?

In “Americanizing a Syrian Civil War“, Lydia Goodman questioned why we would try to inflict Western values on a very anti-Western group of people. She also questioned siding with the Syrian “rebels”:

The “freedom fighters” that Obama, McCain, and their ilk want to arm are responsible for countless atrocities against the Syrian people, particularly Christians.

According to a recent Pew Research poll, 70 percent of Americans are against sending military support to the Syrian rebels with the majorities of all partisan groups opposed. President Obama, receiving backlash from Republicans and Democrats, would be wise to listen. Stay out of Syria.

Also read Lydia’s article, Syria: The Big “If” in which she further explained what might happen if America sides with the Syrian “rebels” and the impact on Christians in the region.

Carolyn Elkins wrote “War in Syria: To Be or Not to Be, That is the Question”, asking the same questions in 2013 as we are asking today: Was it Assad or the Syrian “rebels” who used chemical weapons on Syrian citizens? Elkins wrote: Some sources claim that the rebels used the chemicals and blamed the Assad regime. Russian President Vladimir Putin said the claims were “nonsense” and said, “Syrian government troops are on the offensive and have surrounded the opposition in several regions. In these conditions, to give a trump card to those who are calling for a military intervention is utter nonsense.”

In her piece “Bishops, Pawns and Horses of War: Gunrunning to Syria?” Carolyn Elkins discusses possible gunrunning into Syria.  And in another article entitled “Who is the Real John McCain” Elkins wrote of many inconsistencies in McCain’s willingness to arm Syrian ‘rebels’: Mr. McCain said the United States would not have to send weapons directly to the opposition but could work through “third-world countries” and the Arab League. Please forgive me for being someone who doesn’t sit on the Armed Services Committee, I’m only a stay at home mom, but are you crazy? Which third world countries would you like to ship guns through Mr. McCain? Perhaps Croatia, Turkey, Qatar, Saudi Arabia and Jordan aren’t exactly third world, but they have been aiding the airlift of weapons going to rebels since at least last fall. How would sending arms through “third world countries” get them into the proper hands? Especially since none of you seem to know who is fighting for whom?

And be sure to read Carolyn Elkins’ article ‘Syrian Crisis Spills into Neighboring Countries“: Now US and European officials have said that there have been noticeable improvements in the effectiveness of Syrian rebel groups in the past few weeks. One question weighs on my mind, what happens when whichever way it goes, when the Syrian conflict is over? Will all of these armed, and now well trained “rebel” groups with well-known terrorist ties, who are enemies of the US, yet who have in large part been armed and trained by our people, go back to their home countries, or will they grow into a newer army looking towards Israel and the US as their next battlefield, and what will all of this mean for our Military who are still fighting or participating in exercises in the Middle East?

In her article, “Regarding Syria: Keep Your Eyes on Iran”, Julie Klose wrote in 2013:  The actions taken against Syria by the United States will be a reflection to Iran as to how we will oppose them. A weak response will send the message that Syria may be able to continue chemical weapons with minimal cost. It will also send the message to Iran that they will be able to continue their nuclear program and Rouhani will likely be committed to gaining more relief from sanctions and strengthening the regime in Tehran.

So how should the United States respond to Syria? Bolton does not feel that we should get involved in Syria and “it is not in an American interest to use force”. However, both Ledeen and Bolton firmly stated that if the U.S. does respond with military action, a weak response would only confirm to both regimes that they can continue their policy of terror on their own people as well as on the western world.

According to Ledeen and Bolton, any response to Syria must first be carefully calculated with regards to Iran.

Leslie Deinhammer also wrote extensively about problems in Syria and also in accurate (or rather inaccurate) reporting of it in, “Al Jazeera America: You Can’t Put Lipstick on a Pig“.  Leslie wrote:

While Al Jazeera does an exemplary job portraying Bashar Assad as the monster he is, the network glosses over opposition crimes against humanity. Rebel reports are blanketed in vagaries portraying rebels as noble activists fighting the cause of overthrowing the Assad (or Mubarak) regime.

Glossed over are the accounts of a Syrian rebel fighter cutting out the heart of a regime soldier and eating it and Syrian rebels kidnapping and beheading a Christian man afterwards feeding his body to the dogs.

Glossed over is the fact that the Syrian National Coalition is comprised of thirteen opposition groups. The al-Narsa Front (an al Qaeda affiliated faction, a group designated by the US as a terrorist organization) is the most notorious among the thirteen. The Syrian National Coalition has taken great strides in organizing opposition against Assad. The Coalition has encountered numerous difficulties reigning in its more fringe members and has experienced difficulty retaining a Westernized figurehead as its leader.

And finally, in 2013 Carolyn Elkins posed questions that America will possibly need to answer once again. If there are still displaced Syrian refugees from 2013, what will happen now, with a new conflict in 2017?  In her article “How Hot Can Summer Be in Syria?” Carolyn wrote:

As millions of Syrians become displaced refugees and the country torn apart, the Obama administration is purposely choosing not to settle the situation with diplomacy. Both Russia and Syria have made recent offers for negotiations. By aiding the rebels instead, Obama is seemingly instead to choose more slaughter. We must not forget that by backing Sunnis when it comes to Syria as it did also in Egypt and Libya, that Al Quaida and other Salafist extremists are Sunnis

Our arming rebels, knowing that anything we send in aid, whether monetary or military will most likely end up in terrorist’s hands has Israel somewhat apprehensive as well, and who can blame them? Israel’s former deputy foreign minister Danny Ayalon has repeatedly said it would be a “mistake,” and a couple of months ago, Israeli Prime Minister Netanyahu said such plans “presents the question of which rebels and which weapons?”

Indeed. Many Americans would like to know that answer.