A shocking email attacking a long time grassroots activist known as a thorn in the side to the Colorado Republican establishment has been connected to Jeff Hays of El Paso County, the newly elected chairman of the Colorado Republican Party. The correspondence can be described as an example of extreme political bullying with relentless personal attacks against the man behind Campaign Integrity Watchdog, Matt Arnold.

The vicious email has been traced to the campaign of Chairman Hays. It shows a sexualized photoshopped picture of Arnold’s face with what appears to be ejaculate smudged across his face and hair. The email campaign compliments a recently created “Matt Arnold-turd” Facebook page, Twitter account, and Tumbr account. (All social media accounts have since been removed.)

A Colorado activist has come forward with evidence linking the Hays campaign to the “Matt Arnold-turd” social media and email smears.

Erin Behrens of Jefferson County states, “I signed up for the Hays campaign email list, giving them the name Ericka instead of Erin. The libelous Arnold email also addresses me as Ericka. I receive no other emails with that name.”

Behrens forwarded a copy of a Hays campaign email addressing her as Ericka along with a copy of the Matt Arnold-turd email she received, showing her name listed as “Ericka” on both emails.

Like the Hays campaign emails, the attack email on Arnold came from a MailChimp server and used a similar colored orange heading. 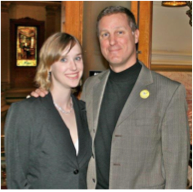 The pre-existing animosity between Hays and Arnold is no secret. When Hays served on the El Paso County Executive Committee, he moved to censure Arnold’s then fiancee, who was party secretary at the time, for speaking out against the Colorado health exchange bill known as “Amy Care” championed by Senator Amy Stephens—whom Hays also worked for as a legislative aide. Most recently, Arnold filed and won a complaint against the El Paso County Republican Party for filing errors made on Hays’ watch as county chair. The county party was fined and forced to return donations for a number of errors on finance reports filed with the Secretary of State’s office.

The author(s) of the Matt Arnold-turd email wrote that they “became bored and decided to have a few beers and write an email to you inviting you to watch the sh*t show unfold.”

The email claims to come from a group of people who want to “showcase the litigation-happy history of Matt Arnold.” In the email, they refer to themselves as “mattarnoldturd.com.” The domain was purchased on March 10, 2017 using domains by proxy to keep themselves anonymous.

This has led to speculation of who else might be involved in the orchestrated smear campaign.

Some Republicans who received the email have voiced concerns that former Colorado legislator and two-time gubernatorial candidate Bob Beauprez might also be linked to the personal attacks. 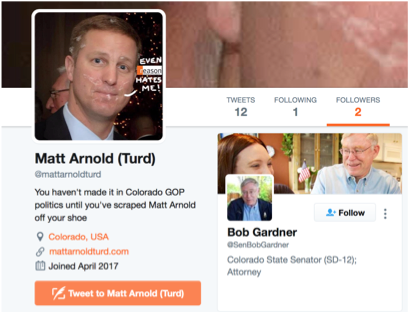 Arnold recently put Beauprez in the hot seat for his connections to dark money that successfully attacked conservative Republican candidates leading to their ouster in the 2016 primary election. Beauprez’ group Colorado Pioneer Action was found to be engaged in illicit electioneering by shielding donors from campaign finance laws through an independent expenditure committee.

Others wonder if the liberal Republican state senator Bob Gardner of El Paso County is connected to the smear campaign. Gardner was one of the first two people to follow the Matt Arnold-turd twitter account. Because of Arnold’s court filing against him, Gardner was ordered to pay $10,000 in fines to the Secretary of State’s office. Those fines have not yet been paid—as Secretary of State Wayne Williams, also from El Paso County—has refused to collect it.

The social media pages vilifying Arnold were first shared by what is believed to be a fake Facebook account, also with connections to the Hays campaign. The account has been publishing numerous posts attacking Arnold. The person behind the alleged fake account also supported the Hays campaign, at one time publishing a meme so offensive against Hays’ opponent that even Hays himself told the poster to delete it. (Politichicks obtained a screen shot, but it is so vile that we will not republish it.)

At this time, the chairman has not released any comment to this developing story.

The Arnold family has set up a gofundme account to raise money for a private investigator. Arnold’s wife states on the gofundme page:

“We’re certainly not made of money, especially as we prepare for baby #3, but I would like this baby to come into a safer world.  We would like to hire a PI to stop the ridiculous attacks and libel, and find out who the perps actually are.  The sooner we can do this, the sooner I can feel like my children and family are safe.  I would not put it past any of the people likely involved in this to escalate this from facebook to something more personal.  And that is really scary.”

Here are how some Republicans responded to the email: 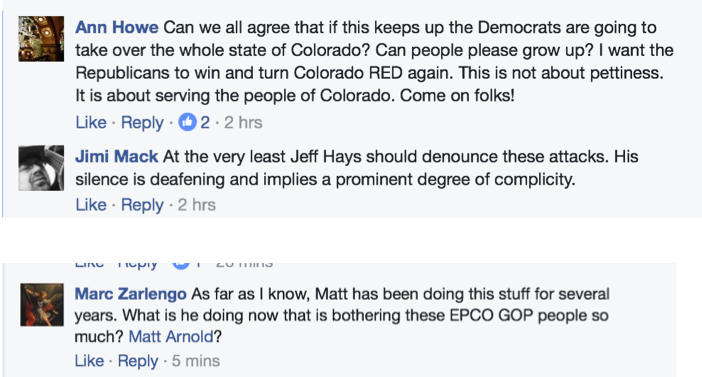 See the contents of the email below.

WARNING: Please be advised that the following email contains profanity and offensive content.

On the evening of April 19th, mattarnoldturd.com was launched, along with a few social media accounts. The purpose of the anonymous venture was to showcase the litigation-happy history of Matt Arnold — Colorado’s political activist “gadfly” at the helm of Campaign Integrity Watchdog — utilizing parody, satire, and some entirely poorly chosen language.

Within 24 hours, Matt Arnold and his army of goons showed their true intentions when it comes to criticism, and the Tumblr was terminated.

But that was just the beginning of day 1…

Proponents of Matt Arnold quickly tried to criticize the effort as “slanderous” and “libel”, failing to note that Matt Arnold himself had previously cheered on both the South Park “Turd Sandwich” parody as well as an Australian Senator who had once proclaimed “Go F**k Yourself You Communist Turd”.

The hypocritical battle line was drawn, and while the Tumblr was an early casualty of Matt Arnold’s campaign against criticism, and of course a whole bunch of his friends got mad, mattarnoldturd.com just started making memes:

And it was good. Until Sarah Arnold, Matt’s wife subsequentially launched a GoFundMe page to hire a private investigator (and falsely alleged that she and her sons were being targeted, which was absurd).

The response from mattarnoldturd.com was both swift and poignant:

What do Matt Arnold and Rick Sanchez from Rick & Morty have in common? Apparently, they will both use kids as human shields!

We just got word that Matt’s wife, Sarah Arnold, has started a GoFundMe page. Let’s be perfectly clear, the target of our satire and parody is Matt Arnold. We’re not using anonymity and hiding our faces because we’re “cowards” but because that’s what artists do under oppressive regimes! Matt Arnold has time and again shown a penchant for silencing Colorado Republicans he doesn’t like and critics through bullying tactics like campaign finance lawsuits and mob takedown campaigns of websites and social media accounts. All the while playing the victim.

We will not be bullied, we are simply holding up a mirror.

In that vein, we are linking to Sarah’s GoFundMe page, with a short rebuttal that merely changes a few of her own words:

“Political discourse that begins with lawsuits and threatening behavior towards not just a candidate but their staff, volunteers and supporters is the first resort of Matt Arnold. Colorado campaign finance law makes it easy for him to hide behind a computer screen and lob lawsuits without thinking that it has real consequences and is directed at real candidates.

Colorado Republicans are certainly not made of money, especially as we prepare for election 2018, but we would like this election to come into a safer world. We would like to hire a pooper scooper to stop the ridiculous turds and lawsuits, and find out how the hell to get it off our shoes. The sooner we can do this, the sooner we can feel like our candidates and supporters are safe. We would not put it past any of the people likely involved in this to escalate this from facebook to something more personal. And that is really scary.

We would appreciate any help you can offer to stop these thugs. If we don’t do it now, who knows who the next target will be? Please help us hold them accountable. We would be very grateful for any help.

At that point, the mattarnoldturd.com admins became bored and decided to have a few beers and write an email to you inviting you to watch the shit show unfold.

After all, it had already been a busy first day and it was kind of crazy how a Facebook page with only 11 likes (13 followers) and a Twitter page with 1 follower had Matt Arnold in an absolute tizzy.

The admins rightly assumed that not many people would really want Matt Arnold to know they found it amusing, lest he launches a salvo of lawsuits in their direction. And it’s precisely why the admins had chosen to remain anonymous in the face of a master of intimidation.

But the Facebook stats showed a shitstorm was brewing:

What will be in store tomorrow and the day after that?

You can only be able to find out if you officially subscribe to our email list below. This email serves only as a cordial invitation. If you don’t want to watch this shit show, feel free to ignore it all together.

Thank you for your time!

Sandra Solomon: What Islam Taught Me About Christians