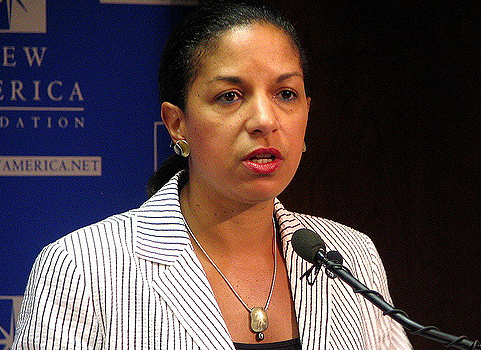 The Benghazi deceptions, the selling of the Iran deal, the Bergdahl trade – one ‘expert’ kept turning up to peddle falsehoods. Susan Rice is the real version of Woody Allen’s cinematic character Zelig, who in the movie of the same name popped up almost anywhere as an expert on anything.

As U.N. ambassador from 2009 to 2013, and later as National Security Adviser from 2013 to 2017, Rice seemed to have turned up everywhere there was an Obama-administration implosion. She was always eager to offer a supposedly expert assessment — one that also always proved wrong or untrue or both.

Rice, along with Secretary of State Hillary Clinton and Samantha Power, had a major role in the disastrous Libyan bombing decision and its wasteland aftermath.

As U.N. ambassador, she helped the U.N. draft resolutions establishing no-fly-zones and humanitarian aid to curb the violence against Arab Spring protestors. But such U.N. policies were immediately contorted into an active military role when the U.S. and allies supplied direct air support to anti-Qaddafi ground forces. The allied bombing to overthrow Qaddafi gave some credence to Russian complaints that Rice had deceived them about the true intent of the resolutions, which were really used by the Obama administration to facilitate French, British, and American efforts to achieve regime change in Libya.

The later Benghazi disaster and the subsequent false narrative of a video-inspired spontaneous riot — aimed at advancing the “al-Qaeda on the run” talking point central to Obama’s reelection campaign —were her most infamous moments of deceit. That fake-news effort eventually led to the unjustifiable imprisonment of the scapegoat (and otherwise shady character) Nakoula Basseley Nakoula on suddenly trumped-up enforcement of his parole violation. Rice’s well-publicized untruth, while helpful to Obama’s reelection effort, was not benign: It obscured the disturbing circumstances in which four brave Americans died.

Yet, to be fair, it is difficult to know whether Rice was a seasoned architect of that duplicity. Given her reputation as a useful naïf and loyal fall person, perhaps she was easily manipulated into going on five Sunday shows to mislead and distort. Her subordinate Ben Rhodes needed a vessel to assure the nation that the Benghazi attacks were not due to administration policy failures, and Rice was deemed the ideal vehicle to spread that myth.

And the fable of the supposedly honorable Bowe Bergdahl (currently facing Pentagon charges of desertion)?

Rice was there, too. To prop up an unhinged trade of five terrorists at Guantanamo for an AWOL soldier, Rice falsely claimed that Bergdahl had “served with honor and distinction.” Then she trumped that with a quite unnecessary fillip: “Sergeant Bergdahl wasn’t simply a hostage; he was an American prisoner of war captured on the battlefield.” Left unsaid was that a number of American soldiers were killed as a result of efforts to find his walkabout whereabouts.

Again, note always the weird but characteristic Rice emphatics: Just as she did not go on one show but five to disseminate Benghazi falsehoods, so too it was not enough just to leave Bergdahl’s story at “honor and distinction” without the added “captured on the battlefield” nonsense. Unfortunately, she can be counted on to give a tough, no-holds-barred confirmation of something false — on the logic that bogusness gains credibility the louder and stronger it is expressed.

The Iran deal? Rice was there, too.

Just a few months before American hostages in Iran were released upon receipt of a hushed nocturnal shipment of $400 million in international currencies (a fact hidden from the public for months, given that it seemed to have coincided with the real and final full implementation of the Iran deal), Rice had assured the country that just the opposite would occur:

And we were very specific about the need not to link their fate to that of the negotiations, because we had no idea for certain whether negotiations would succeed or fail. We didn’t want to give the Iranians a bargaining chip to use against us in the negotiations.

“Bargaining chip” was Rice’s phrase, not that of the opponents of the deal. But notably, on prior occasions, skeptics had feared that Iran would indeed use the hostages as a “bargaining chip” traded for concessions, only to later release them secretly under false premises of not being linked to the deal. All of which happened.

Observers have been perplexed about the apparent omnipresence of the Sarin-gas depots in Syria that prompted the recent American strike. Again, it is always wise to find out the reality on the ground by first referencing anything that Susan Rice might have said in the past on the topic — and then assuming its exact opposite. When asked just 90 days ago about Syria’s supposedly nonexistent WMD, Rice reaffirmed to the nation: “We were able to get the Syrian government to voluntarily and verifiably give up its chemical-weapons stockpile.”

“Verifiably”? How would we verify? By trusting the word of Bashar al-Assad? The assurances of Vladimir Putin? The assumption of U.N. monitors that they had full access to the Assad inventories?

The best spin on Rice’s characteristic deception is that she was offering a defense of outgoing Obama policies that were likely to be attacked in the same way that she herself had attacked Bush policies in the early days of the Obama administration. The least charitable interpretation is that she and others assumed there were no guarantees that Assad had given up his WMDs, and she was simply counting on the likelihood that Assad would not use chemical weapons with an unpredictable Trump in the White House.

A characteristic of Rice’s rhetorical gymnastics is that she usually advances the least logical, least empirical, and most easily refuted assumption as the party line.

When Rice was initially asked by Andrea Mitchell about disclosures that she, acting as some sort of White House investigator, had made formal requests to unmask Americans found on intelligence intercepts and that she had leaked the results, she assured the country that she knew nothing about that: “I know nothing about this.”

Yet just days later she seemed to contradict that very assertion: “It was not uncommon. It was necessary at times to make those requests.” Surely she must have known that her contradictory statements could soon be refuted or affirmed with documentation that is now in the hands of congressional investigatory committees.

Her assertions about the removal of Assad’s chemical weapons were easily contradicted by their use; so, too, her denials of unmasking will be refuted — not by right-wing zealots but by documents themselves. Her contortions remind us why Representative Devin Nunes, in such a general climate of omnipresent distrust, chose to go public about what he had discovered, noting that the facts were at odds with what theretofore had been universally claimed and so often leaked.

And the Rice denial statement is, by design, enigmatic: “There was no such collection or surveillance on Trump Tower or Trump individuals, it is important to understand, directed by the White House, or targeted at Trump individuals.” The assertion and its qualifiers may allow enough wiggle room to claim that Trump people were in fact surveilled but were not initially the target of that effort. The lawyerly phrasing could also suggest that the surveillance was ordered by people in the Obama administration but not by those who were literally in the “White House” in the sense of the president with his pen and phone at his desk in the Oval Office.

In sum, almost anywhere there was a major Obama deception on foreign policy, Rice appeared the counter Forrest Gump of our era.

Beauty From Ashes: We All Have Our Stories